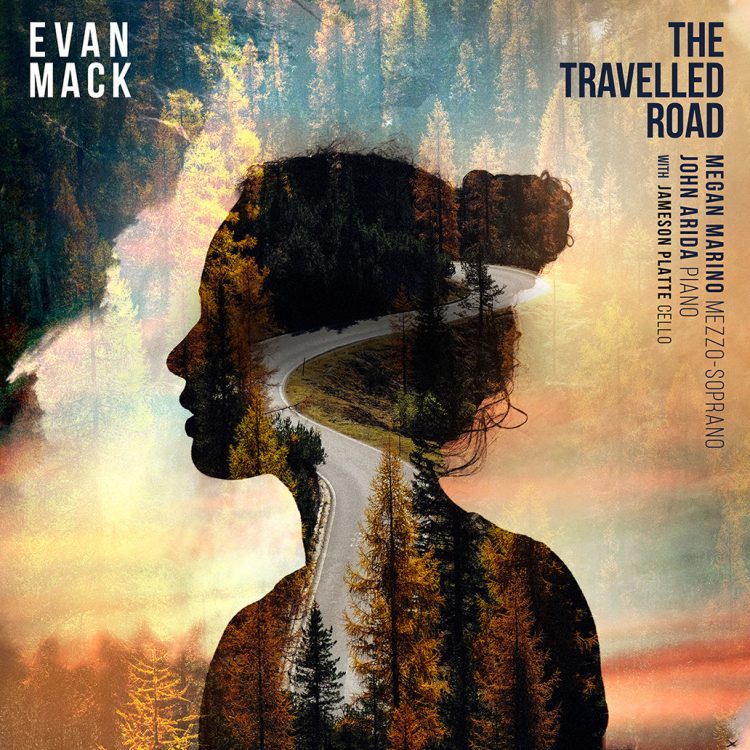 For those who have been watching Atlanta Opera’s Big Tent series, Megan Marino is certainly someone worth following. Her appearance as Beppe in Pagliacci (as previously reviewed for this illustrious podcast’s website) brought a refreshing degree of sweetness and youth to a tenor part can typically go unnoticed. Later in the season, during the Mezzo Extravaganza Concert, she showed the full warmth and richness of her voice in “The Bonnie Banks o’ Loch Lomond.”

After such high-caliber performances, it only makes sense that Marino’s new album, The Travelled Road, a recital program of songs and arias by Evan Mack, is a compelling and dynamic listen.

Here, Evan Mack collaborates with John Arida on the piano, with Jameson Platte joining on cello. Mack’s work runs the gamut from the sublime to the ridiculous. He wrote Angel of the Amazon, an opera about a nun who was martyred for her work to save the Brazilian rain forest in 2005. Marino sings selections from that opera on this album. Yet Mack also wrote #IsOperaDead, a five-act piece on twitter that is less than five minutes. Each act provides the singers with a chance to parody famous performers or characters from canonical operas as they ponder the future of opera. The work, written in 2015, is still on twitter for any opera fans who are in the mood for a good belly laugh. I highly recommend it.

The Travelled Road perfectly encapsulates both extremes of Mack’s composition output. It begins with “A Little More Perfect,” a setting of the opinion written by Judge Anthony Kennedy who ruled in favor of marriage equality in the United States in 2015.

Marino’s adept use of declamation is a hallmark of her performance on this album. Hers is a luscious mezzo-soprano voice that easily envelops the listener in its richness. A hallmark of Mack’s compositional style is his ability to manipulate dynamics typically starting from nothing and building of to a climactic finish that allows Marino to show the beauty as well as the many dramatic capabilities of her voice as seen in the “3 Reflections of Sister Dorothy” song cycle. Here, Marino flawlessly illustrates every facet of this complex individual, whether portraying her sadness or her determination. Additionally, even though Mack does not really write a straightforward melody except at the end of a piece to heighten the dramatic resolution, Marino brings out the innate melodiousness of Mack’s writing, allowing the listener to truly get lost in the music.

The CD also features the “Preach Sister, Preach” song cycle, an uproarious collection of miniature songs based on quotes from famous women throughout history, including everyone from Ellen DeGeneres and Gilda Radner to Mae West and George Eliot. Miniature songs are as difficult to write as they are to perform. They require both the composer and the performer to inhabit a character in less than a minute. When done well, as was the case here, the result can be thrilling as in the section based on Tina Fey, Marino perfectly executed a series of exaggerated ornaments that are like a musicalized version of Liz Lemon’s trademark eye roll from 30 Rock. Similarly, in Mae West’s section, the slow sultry rhythms in Marino’s languid declamation work in tandem to create a musical portrait of this iconic actress and sex symbol.

As music lovers, we all know the joy that comes with getting hooked on a new composer. Evan Mack’s engrossing album The Travelled Road not only introduces the listener to a new composer, but also Marino’s performance heightens Mack’s ability to write compelling music in a variety of genres. In short, this album is a great introduction for those who have not heard Mack’s music before, as well as a wonderful addition for those who are already his fans.