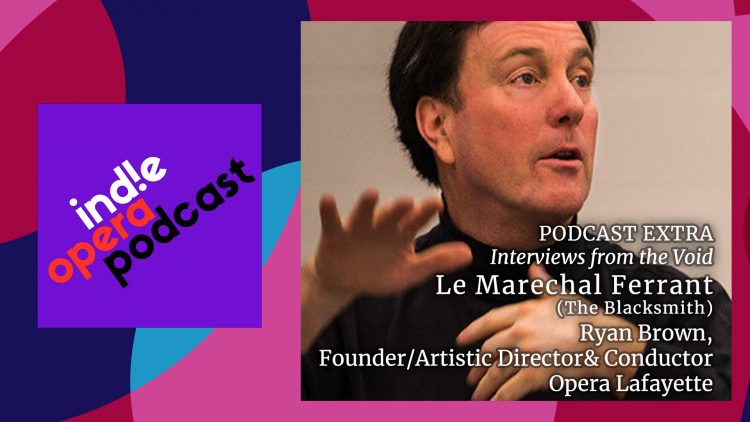 Description: This excerpt is from the opening  of the opera in which the blacksmith is working at his forge.

Mancos, CO served as the perfect backdrop for Opera Lafayette’s adaptation of Philidor’s The Blacksmith in October 2020. Presented in partnership with Mancos Creative District in front of a live audience, this modern premiere was adapted and translated from an 18th-century French opéra comique composed by François-André Danican Philidor in 1761 to the late 19th-century American West. Staged outside on Opera Lafayette’s Artistic Director, Ryan Brown’s family ranch, The Blacksmith is set in front of an historic Blacksmith Shop and Barn.

Recapturing the humor and immediacy of the original, Nick Olcott and Ryan Brown adapted the French libretto by François-Antoine Quétant. Opéra comique originally integrated French vaudeville songs, allowing for audience sing-alongs. Honoring this, Brown has woven American folk songs from the Alan Lomax Collection, popular during the turn of the 19th century in America, into this adaptation. This production bridges country and city, celebrates rural themes, and invites audience participation by joining in to sing familiar folk songs like, “The Old Grey Mare,” “I Ride an Old Paint,” and “Red River Valley.”

The production features the return of Dominique Côté, Pascale Beaudin, and Sarah Shafer, as well as introduces singers to Opera Lafayette (Arnold Livingston Geis, Frank Kelley, and Joshua Conyers). The orchestra features Maestro Brown on his fiddle, two-time finger-plucking champion Adam Gardino on guitar, and Doug Balliett, contrabass. Plus, the accompaniment is enhanced by local musicians on fiddle, guitar, and banjo.

Ryan Brown is the founder and artistic director of Opera Lafayette, which will celebrate its 25th anniversary in the 2019/2020 season. Through his work with Opera Lafayette, Ryan has gained an international reputation for his role in the revival and reassessment of significant works from the 17th, 18th, and 19th centuries. His discography of twelve sound recordings for Naxos has focused on the French repertoire, including well-known works by composers such as Lully, Rameau, and Gluck, as well as premiere recordings of operas by Rebel/Francœur, Monsigny, Philidor, Grétry, Sacchini, and Félicien David. Ryan has also created two DVDs with Opera Lafayette for Naxos, including the modern premiere of Gaveaux and Bouilly’s Léonore, ou L’Amour conjugal, the model for Beethoven’s Leonore, the latter which Opera Lafayette will present in its 25th anniversary season, as well as Rameau’s Les Fêtes de L’Hymen et de L’Amour, ou Les Dieux d’Egypte, a collaboration with the New York Baroque Dance Company, the Seán Curran Dance Company, and Kalanidhi Dance. Ryan has also led  performances of operas by Vivaldi, Handel, Mozart, Haydn, Paisiello, and Cimarosa. He regularly appears in Washington, DC and New York with Opera Lafayette and has also conducted in San Francisco, Seattle, and at The Glimmerglass Festival, and the Opéra Royal de Versailles. Ryan was raised in a musical family in California and performed extensively as a violinist and chamber musician before turning his attentions to conducting. His teachers included Dorothy DeLay and Gustav Meier. He is a recipient of La Médaille d’Or du Rayonnement Culturel from La Renaissance Française, and when not conducting spends his time in southwestern Colorado.

Founded in 1995 as The Violins of Lafayette, the company was part of a period instrument renaissance, a movement that provided a primary avenue for performing musicians searching for new ways to explore music of the past. Our debut season took place in the Salon Doré of the Corcoran Gallery of Art in Washington, DC and featured four chamber music concerts by some of France’s greatest 18th-century composers. In 2001, the company was reincorporated as Opera Lafayette, reflecting our increasing concentration on opera that unites musical, vocal, and choreography to present richly nuanced realizations of the 17th- through 19th-century repertoire. In 2012 and again in 2014, Opera Lafayette achieved international fame when, at the invitation of Chateau de Versailles Spectacles, we were invited to perform at Opera Royal in Versailles, France, closing with five sold-out performances.