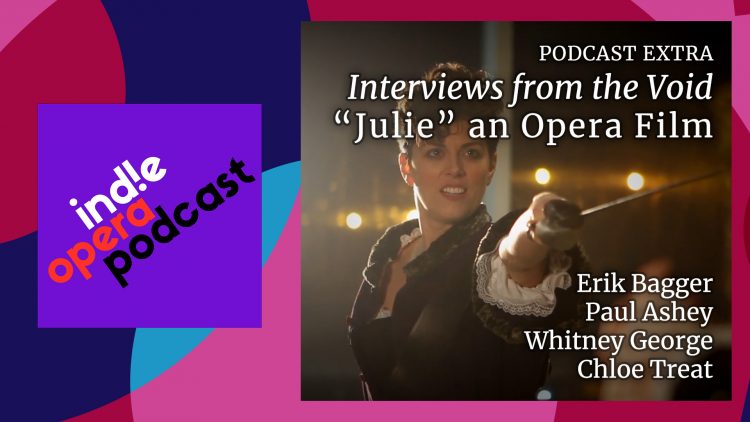 On June 4th, 2020 via YouTube, New Camerata Opera premiered Julie, a new opera film directed by Chloe Treat with a score by Whitney George and libretto by Wallis Darke. New Camerata Opera commissioned this project based on the life of Julie d’Aubigny. A swashbuckling, bisexual swordswoman and opera singer, d’Aubigny fought for a world in which those who misbehaved got what they deserved. This work is the first attempt to tell Julie’s story through opera, befitting a woman who graced the stages of the Paris opera houses in the 17th century.

The libretto focuses on a snapshot of the varied and colorful career of Julie d’Aubigny. At a society ball in 1695, d’Aubigny arrived dressed in men’s clothes and caused an uproar when she openly kissed a young woman. She was immediately challenged to duels by different noblemen, and she swiftly defeated each of them.

To create this opera film the cast of eleven singers joined forces with The Curiosity Cabinet, a chamber ensemble under the baton of the composer, at The Ice Plant Studio in Long Island City to record the audio for Julie in November 2019. Then over the course of 6 days in January 2020, director Chloe Treat worked with the CamerataWorks crew to film this epic story. The shooting location, procured with the help of ChaShaMa, was donated industrial space on Roosevelt Island. Costumes designed by Angela Huff reflect the period and stand in stark contrast to the industrial setting.

New Camerata Opera is an artist-led, New York City-based company in its fourth season. Its mission is to engage, excite, and educate audiences through immersive performances that break down barriers and inspire opera fans of the future. New Camerata Opera offers immersive and intimate mainstage productions, children’s operas through Camerata Piccola, and produces short operatic films with CamerataWorks.