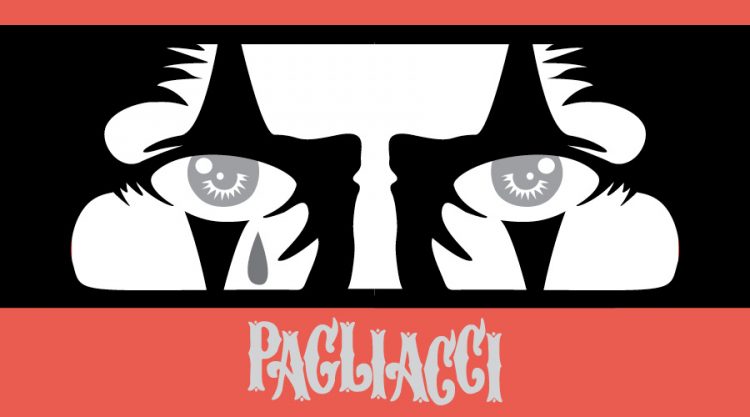 Atlanta Opera recently aired its production of Pagliacci, directed by Tomer Zvulun. That opera is most famous for “Vesti la Giuba”, the crying clown’s aria. “Vesti la Giubba” is one of those pieces that everyone knows, but doesn’t necessarily realize they know­, at least by name. Referenced in everything from Hey, Arnold and The Big Bang Theory to Unbreakable Kimmy Schmidt, it is the aria that closes the first part of the opera Pagliacci (1892). In it, Canio—a member of a travelling comic theater troupe in Italy—gets ready for a performance and is faced with the dilemma of needing to make people laugh for a living, while his personal life is in shambles. In fact, it is this contrast illustrating the dichotomy between what is real and what is a performance that keeps bringing audiences to the opera.

Set in southern Italy towards the end of the 19th century, Pagliacci is—succinctly—about an honor-killing. Composer and librettist, Ruggero Leoncavallo, wrote that the story was inspired by an incident from his youth, involving the murder of a family servant. The short, two-act opera culminates in Canio murdering his wife Nedda, and her lover Silvio during a commedia dell’arte performance. Interestingly, in southern Italy, honor killings were legally permissible until the 1960s.

Pagliacci has always been famous in the opera world for being the Pag part of Cav/Pag. The other being Cavalleria rusticana(1890), composed by Pietro Mascagni with libretto by Giovanni Targioni-Tozzetti and Guido Menasci. The two operas have been linked since Pagliacci’s world premiere. They are thematically similar; both in Verismo style, with Pagliacci being a response to Cavalleria’s success as a winner of a contest for new one-act Italian opera repertoire. The point of the contest was to cultivate the Italian answer to Wagner and the next big thing in Italian opera after Verdi. Whereas Wagnerian operas were long and went on at length, contest entries were to be short, and bite sized.

Although Cav/Pag more or less heralded the Verismo movement, they were simultaneously the beginning of it and the closest that Italian opera would ever get to Verismo ideals. Operas that followed in the Verismo period more closely resembled Puccini’s Tosca. In this Verismo portrayal, the character Scarpia is a police chief, but he is also a Baron (and thus noble). In that regard, you have very few operas actually about truly average people. Even Tosca herself lives in the rarified world of 19th century opera singers. Similarly, Puccini’s Manon Lescaut is based on one of the earliest French novels. As such, it deals heavily with the French aristocracy before the 1789 revolution.

The way verismo manifested itself was not just in the subject matter, but also in the way that people would react to things like death. In Manon Lescaut, the leading lady actually says that she does not want to die, marking a big departure for opera. Whereas in Anna Bolena, you could argue that she is not happy about her death, but she accepts that this is what she must do and doesn’t object outright.

Stylistically speaking, Verismo made it permissible to show and/or incorporate actual human emotion into the singing. Whereas before the rules of good singing were always paramount. (E.g. La Traviata, where even though Violetta is sick with tuberculosis, she is not supposed to cough—though singers often do in modern performances.) Even the concertato at the end of the first act of Verdi’s Un ballo in maschera, where the king has just been told by a fortune teller that someone close to him is going to kill him, he attempts to make a show of laughing off his fate. But even then, the singer is technically not supposed to literally laugh.

However, Pagliacci is more than straight forward Verismo. If you take Pagliacci in the context that it is the second half of the double bill with Cavalleria rusticana, it provides a kind of weird other side to the same coin. Cavalleria rusticana is like a hyper-realistic depiction of an honor killing caused by adultery.

This is also the basis of Pagliacci, however there is the added dimension of the play-within-the-play in the second act—the setting of the aforementioned murders, with the performers’ emotions gradually boiling over until the eventual killings. The scene provides a unique look at how the theater mirrors and/or distorts reality. Leoncavallo sets up a contrast between the obviously artificial music of the performance and the more compelling music which examines the true feelings of those involved.

Atlanta Opera’s production, held outside under The Big Tent on Anderson Field, at Oglethorpe University’s Hermance Stadium is commendable for taking COVID guidelines seriously. This production included socially distancing, an outdoor setting, and a reduced orchestration. During the play-within-the-play, the characters onstage personas were portrayed by puppets while the singers sang from cubicles. Additionally, at the end of the opera, Canio shot Silvio instead of stabbing him—a directorial choice also allowing for greater social distancing.

It should be said that this production spared Nedda’s life. Yet, it still works. She and Canio are left to deal with the added stress of Silvio’s murder. The point of the opera’s ending is not Nedda’s adultery, but rather the consequences of the breakdown of communication between her and Canio.

That said, COVID perhaps exerted too much of an influence on this production, as during the overture, visuals of newspaper headlines detailing Canio’s bout with the virus, made COVID 19 an element of the opera that did not make sense. It did not provide any deeper understanding of the opera. If anything, when Canio collapsed in a coughing fit at the end of “Vesti la Giuba,” it got in the way of the music and lessened the aria’s emotional impact. This was unfortunate as Richard Trey Smagur was in fine voice as Canio. He handled the role’s intense emotions stylishly, without pushing his voice. Additionally, having Beppe post Canio’s first aria to Facebook Live was a novel directorial choice. After all, he is trying to drum up publicity for the play in the following act. However, it seemed like a missed opportunity not to have the play itself live streamed. This would have given the murder a wider audience, and made it all the more jarring.

This production is also notable for turning Beppe into a trouser role. This decision helped emphasize the characters youth. Megan Marino brought out the sweetness of the role. However, the decision to have her open the evening with “Mack the Knife” from The Threepenny Opera was misguided, this setup a connection with the two operas that was not really explored. Kurt Weill’s The Threepenny Opera (1928) is a 20th century retelling of “The Beggar’s Opera” by John Gay (1728). Its characters are mostly thieves, prostitutes, and other people of ill repute. While the characters in Pagliacci are of the lower classes and the opera does end in murder. The characters are, for the most part honorable people who find themselves in a bad situation.

The rest of the cast gave solid performances. As Nedda, Talise Trevigne showcased both a burnished lower register and a translucent upper register. Additionally, both Reginald Smith Jr. who played Tonio and Joseph Lattanzi who played Silvio were compelling baritones. Despite its blemishes, this was an admirable production by Atlanta Opera. They have shown just how opera productions are able to comply with COVID 19 safety protocols while not cheapening artistic standards.