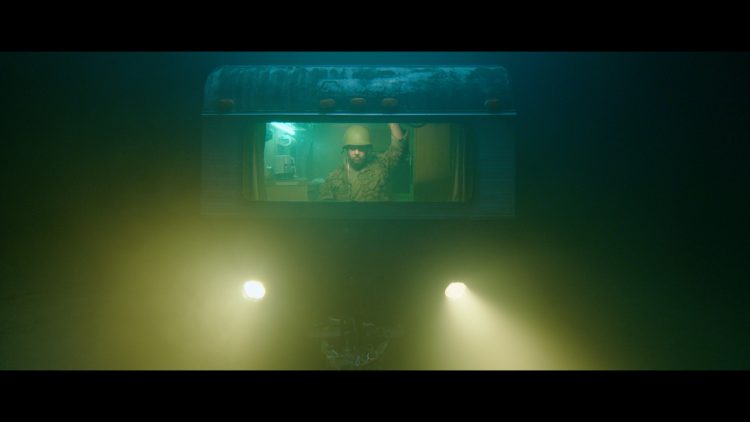 David T. Little’s Soldier Songs is not the first operatic work to deal with the experiences of war. We need to look no further than Verdi to see a multitude of operas like Aida and I Lombardi that explore the patriotic aspects of dying in glory for your country. It’s only in Il Travatore that we get vague hints of Azucena’s post-traumatic stress disorder. However, while that is a driving force for the character, it still is somewhat in the background. Only Fallujah (2016) by Tobin Strokes to a libretto by Heather Raffo, about the Iraq War, really explores the physiological and emotional battle scars that soldiers acquire.

This piece, which debuted in 2011 for the International Festival of Arts and Ideas in New Haven, is divided into three sections, each titled: Child, Warrior and Elder, respectively. Therefore, the work covers the gamut from a naïve boy playing with his GI Joes to a father dealing with the news of his son’s death in combat. However, in a new film made exclusively for the Opera Philadelphia Channel, the overriding theme becomes PTSD.  The entire performance takes place in a lone trailer as baritone Johnathan McCullough struggles with his recollections of his tour of duty. The performance was filmed at the Brandywine Conservancy in Pennsylvania near the site of the Battle of Brandywine which took place in 1777 during the Revolutionary War.

The piece grew out of conversations and interviews that David T. Little had with relatives and friends who had previously served in the military through five wars. To supplement the performance, as part of their Reflection & Re-vision series, Opera Philadelphia had several present-day veterans discuss their experiences both in and out of service.

These interviews became a crucial part of the work, not just providing inspiration but also playing an important role in the musical structure of the piece. These recorded interviews are layered on top of one another and occasionally underpin the music. In this way, the piece is reminiscence of Edgar Veres’ Poeme electronique (1958).  There the composer went outside with a tape recorder to record sounds of the city and then went back to his studio and worked with the actual tape—deciding where to cut it and how to layer and manipulate it.  This technique is evident from the opening shot of the film where ambient sounds of the outdoors including chirps and buzzing get mixed in with snippets of the interviews as well as persistent drum beats which recall artillery fire.

As a composer Little is known for how he incorporates hard rock and heavy metal into his music. His breakout opera, Dog Days (2012) ends with a heavy metal inspired instrumental movement which Little has dubbed a “sound sculpture.” The eclectic mix of styles in Solider Songs is also what makes the score vocally challenging.  The tessitura at times can be difficult, as in the opening movement “I Want to be An American Hero” which requires the singer to leap from head voice to chest voice. While this is difficult to do, it’s a deft stroke of composition because it juxtaposes a child’s view of being a solider with the death & destruction of war.

I want to be an American Hero, I want to be like my toy soldiers, killing all the bad guys with the funny names.

Additionally, the singer needs to navigate between singing, spoken dialogue, and something in-between that is like sprechstimme and McCullough accomplished this with aplomb.

Like Little, McCullough, who starred and directed in this film wanted to perform this piece in an effort to bring greater awareness of the challenges and struggles that soldiers returning from war with PTSD face. While this is a subject that deserves more attention in society in general, in presenting Soldiers Songs, hopefully, more operas like this will follow.

How to watch: Soldier Songs will be available on-demand on the Opera Philadelphia Channel beginning Friday, January 22, 2021. It can be viewed repeatedly through May 31 with a $99 season pass, or it can be rented for $25 (rentals last for 7 days). Learn more at operaphila.tv.