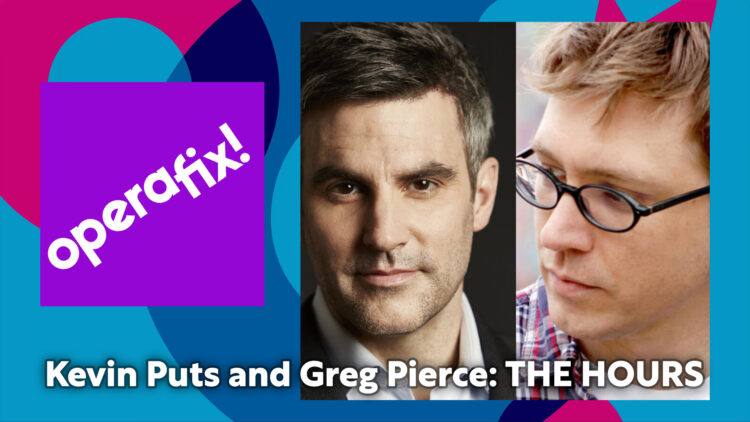 (This interview was originally recorded to support performances of the concert version of the opera in March 2022 presented by The Philadelphia Orchestra.)

ABOUT the world premiere production of this opera:

Music Director Yannick Nézet-Séguin and The Philadelphia Orchestra presented the world premiere concert version of The Hours, a co-commission by the Orchestra and the Metropolitan Opera with performances on March 18 & 20, 2022 in Verizon Hall at the Kimmel Center for Performing Arts.  www.philorch.org/The-Hours.

Based on Michael Cunningham’s Pulitzer Prize–winning novel and the award-winning Paramount Pictures film of the same name, The Hours has been adapted by composer Kevin Puts with librettist Greg Pierce. The story chronicles a day in the life of three women from three different eras whose interwoven narratives are connected to Virginia Woolf’s novel Mrs. Dalloway. In 1923, Virginia Woolf is writing the novel and struggling with depression. In 1949, Laura Brown reads the novel to escape her conventional life. At the end of the 20th century, Clarissa Brown is living a life similar to that of the novel’s titular character. Though their stories take place over 80 years, the women each grapple with the notion of living their lives for someone else.

Winner of the 2012 Pulitzer Prize for his debut opera Silent Night, Kevin Puts’ works have been commissioned, performed, and recorded by leading ensembles, and soloists throughout the world, including Renée Fleming, Joshua Bell, Yo-Yo Ma, Dame Evelyn Glennie, the Metropolitan Opera, the Boston Symphony Orchestra, the Tonhalle Orchester (Zurich), the St. Paul Chamber Orchestra, and the Miro Quartet. Mr. Puts’ second opera, an adaptation of Richard Condon’s novel The Manchurian Candidate, also commissioned by Minnesota Opera with a libretto by Mark Campbell, had its world premiere in March 2015. His newest orchestral work,

The City, was co-commissioned by the Baltimore Symphony Orchestra in honor of its 100th anniversary and by Carnegie Hall in honor of its 125th anniversary. The Brightness of Light, written for soprano Renée Fleming and baritone Rodney Gilfry and based on the personal letters of Georgia O’Keeffe, had its world premiere by the Boston Symphony Orchestra led by Andris Nelsons at Tanglewood and has been performed widely thereafter. September 2017 featured the premiere of Mr. Puts’ first chamber opera, an adaptation of Peter Ackroyd’s gothic novel The Trial of Elizabeth Cree, commissioned by Opera Philadelphia with libretto by Mark Campbell. Kevin is currently a member of the composition department at the Peabody Institute and director of the Minnesota Orchestra Composer’s Institute.

The Vermont native’s Slowgirl, the inaugural play of Lincoln Center’s Claire Tow Theater (LCT3), was subsequently produced by Steppenwolf Theatre and the Geffen Playhouse, among others. LCT3 also produced Her Requiem (Lincoln Center Theater commission). Cardinal was commissioned and produced by Second Stage Theatre. Pierce’s two musicals with composer John Kander are The Landing (Vineyard Theatre in New York) and Kid Victory (coproduction of Vineyard Theatre and Virginia’s Signature Theatre). With director Stephen Earnhart, Pierce co-wrote The Wind-Up Bird Chronicle (Edinburgh International Festival premiere, later seen at the Singapore Arts Festival). Vermont Stage Company commissioned and produced Pierce’s The Quarry, with music by his brother Randal. Pierce has received fellowships from the Edward F. Albee Foundation, Yaddo, The Djerassi Institute, the New York Public Library, and the Baryshnikov Arts Center. He has held a commission from Manhattan Theatre Club/Sloan Foundation. Fellow Travelers, Greg’s first opera in collaboration with composer Gregory Spears was based on Thomas Mallon’s 2007 novel and received its world premiere at Cincinnati Opera in June 2016. Pierce is an alumnus of Oberlin College (B. A.) and Warren Wilson College (M. F. A. in Creative Writing). He is a member of the Dramatists Guild and the Writers Guild of America.