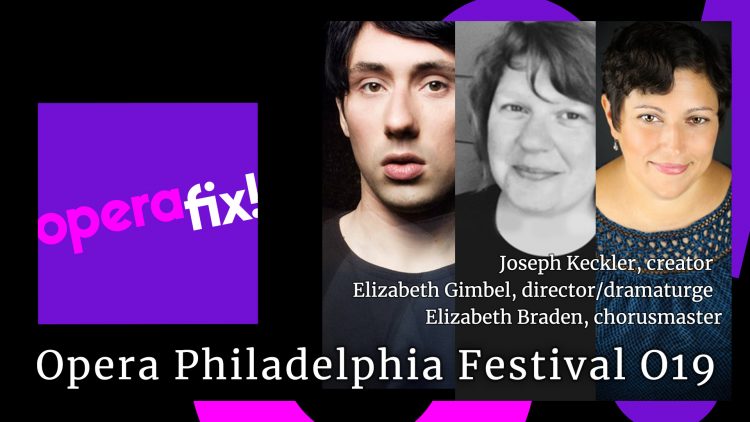 The world premiere production of Let Me Die, a new company commission, is a highlight of O19, the third edition of Opera Philadelphia’s annual season-opening festival. Presented in partnership with FringeArts as part of Philadelphia’s 2019 Fringe Festival for the production of his performance piece, Keckler reunites with dramaturg and director Elizabeth Gimbel, praised for her “poetic direction” (Village Voice) of his earlier works Cat Lady, Human Jukebox and the recent, critically acclaimed Train With No Midnight.

He will be joined on stage by soprano Veronica Chapman-Smith, as seen in Opera Philadelphia’s world premiere productions of The Wake World and Sky on Swings; countertenor Darius Elmore, a George Shirley Vocal Competition semi-finalist; and mezzo-soprano Natalie Levin, whose credits include Santa Fe Opera, Virginia Opera, and Carnegie Hall; with a guest appearance by “startlingly precise” dancer (New York Times) Saori Tsukada, a two-time Dublin Fringe Festival Best Actress nominee. Like Keckler himself, Elmore, Levin and Tsukada will all be making company debuts, as will musical arranger Matthew Dean Marsh, a regular collaborator of Keckler’s, whose work has been heard at Lincoln Center, Brooklyn Academy of Music, Madison Square Garden, and the White House. Let Me Die also features sound design by Isaac Levine, lighting design by Evelyn Shuker, and original video design by FringeNYC Award-winner Lianne Arnold.

Recently hailed by the New York Times as ”major vocal talent [whose] range shatters the conventional boundaries,” singer, musician, writer, Joseph Keckler has garnered acclaim for his rich, versatile 3+ octave voice and sharp wit. He performs widely and has recently performed his work Centre Pompidou, Miami Art Basel, Adult Swim Festival and Lincoln Center, where he also made his off-broadway debut. He is the author of many songs, videos, and short pieces and several evening-length performance pieces and plays. His book, Dragon at the Edge of a Flat World, was published by Turtle Point Press last year.

Elizabeth Braden is joining the faculty of Penn Music Department for the 2019-2020 season as the conductor of the newly formed Penn Chorale. Ms. Braden is also the Chorus Master at Opera Philadelphia, a position she has held since 2004 where she has prepared the chorus for over 40 productions ranging from traditional favorites like La Bohéme, Carmen, and The Magic Flute to new works and world premieres such as Kevin Putz’ Silent Night, Jennifer Higdon’s Cold Mountain, and Missy Mazolli’s Breaking the Waves. Recently she conducted the world premiere of David Hertzberg’s opera The Wake World to rave reviews as part of Opera Philadelphia’s Inaugural Festival, O17. She also conducts a concert featuring the Opera Philadelphia Chorus each year as part of the Kimmel Center’s Organ Day on Verizon Hall Stage.
Previously, Ms. Braden served as Director of Music at Wallingford Presbyterian, where she conducted concerts of Chichester Psalms, the Duruflé Requiem, and an annual Messiah Sing as well as commissioning and premiering new choral anthems by several local composers. Ms. Braden has also prepared choruses for the Pennsylvania Ballet (Carmina Burana, Messiah, Midsummer Night’s Dream), and for the Curtis Institute of Music (Cunning Little Vixen, Dialogues of the Carmelites, Doctor Atomic, Sweeney Todd). Ms. Braden received a B.S. in Music Education from West Chester University with a concentration in piano and voice, and a M.M. in Choral Conducting from Westminster Choir College.