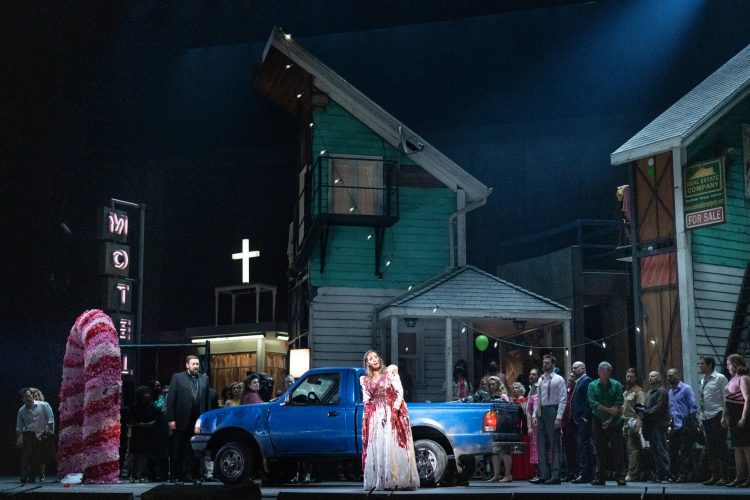 Anyone who knows me, knows the story about how I was three years old when I was introduced to opera by a VHS tape of the magic flute as I was recovering from major back surgery. However, what I typically don’t tell them, is that after that fateful introduction my grandfather took charge of teaching me about this weird and wonderful art form. As you would expect of an opera lover from the greatest generation, he raised me on a steady diet of Bel Canto, Verdi and Puccini. Gound, Bizet, and Mozart were occasionally mixed in just for variety.

That went on for years, and I saw nothing wrong with it.  Until one day in 11th grade when everything changed. I asked grandpa to bring me to the MET for a performance of Janacek’s Jenufa. To say he was caught off guard is an understatement. In the first place, he never heard of that opera, and secondly, it was not Italian. Therefore, it must not be good. I playfully retorted that clearly, he didn’t like any opera that does not feature a heroine who goes insane wearing a bloody nightgown or wedding dress while singing in perfect Italian, with flawless coloratura. Don’t worry, he took it as the joke that it was intended to be. After that, things continued on between us as usual. As funny as that story is,  any opera lover worth their salt can recognize that I lampooned Lucia Di Lammermoor.

Before going on, I just want to state unequivocally that I love Lucia. It’s one of my favorite operas. But, like any opera fan born after the heyday of Maria Callas, my relationship to it is complicated. On the one hand, it has become a pop-culture symbol for all the stereotypical excesses of opera as a genre. A soprano kills her husband on her wedding night and expires after going insane in front of all her guests and screaming her head off in ornamented Italian. Cue Bugs Bunny and Elmer Fudd dressed as Vikings and you got yourself a looney tunes episode.

But, is that really all there is to her? When Donizetti was asked to collaborate with librettist Salvatore Camarano on a new opera, he wrote that he wanted to tell a story about love, but that it should be about violent love. On closer inspection, Lucia does not go insane simply because she was left at the altar. This is a story about a young woman who is manipulated by her family and misunderstood by her lover because of political gain. Some directors such as Mary Zimmerman have staged the opera in ways that make explicit the work’s undercurrent of sexual violence and even incest.  If we add all this to the view of some scholars that Lucia’s opening aria, where she sings about ghostly visions she’s experienced, before consuming herself in ecstatic thoughts of love is a spot-on musical depiction of schizophrenia, then we have to acknowledge that Lucia’s break with reality is not something that the composer and the librettist created for dramatic effect, rather, it is a logical outcome when someone with a mental illness is put under extreme duress.

From a musical standpoint, the piece is both the epitome of what opera can be,  as well as a watershed moment in the development of opera as a genre. Will Berger argues that Lucia’s mad scene hearkens back to the ancient Greek cult of Dyonisos which was instrumental in creating their conception of theater. This is something that the best composers have always strived to achieve. On the other hand, Will Crutchfield has made the case that Lucia di Lammermoor is incredibly innovative not just for its depiction of madness, but also for the sound world that Donizetti created to tell the story. The way Donizetti delineates the characters that interact with Lucia and bring about her madness acts as a musical connective tissue that keeps the drama going at a fast pace which is in many ways more Wagnerian than today’s opera lovers may realize.

With all that in mind, it makes sense that Simon Stone, Director of the Metropolitan Opera’s new production of Lucia updated the story to contemporary middle America. Those who binge-watched Netflix during quarantine will recognize Stone as the director of the movie “The Dig”. His production shifts the setting from early 17th century Scotland,  to the rust belt. After all, the main reason for Lucia’s madness is that she’s forced to marry a wealthy man she doesn’t love in order to save her family from both political and economic ruin. Setting the story amongst the struggling first family of a dilapidated steel town seems an ideal way to show the political pressures of Lucia’s clan in a contemporary light.

Anyone who has seen Stone’s recent theater productions like Medea at The Brooklyn Academy of Music or Yerma at the Park Avenue Armory will know that he is capable of creating powerful and symbolic stage pictures. Images of Medea’s children playing in an ash heap or of Yerma pressed up against the wall of a glass enclosure, crazed and screaming are seared into my mind. With this track record, clearly Stone is no stranger to mad women. Funny enough, if Stone’s truly revelatory production could be said to have any flaws, the fault lies in the depiction of Lucia’s madness. Before going on, It is important to remember that while the Opera’s apotheosis is the mad scene, the true dramatic thrust of the story is not Lucia’s insanity, but rather the abusive, misogyny that causes it. However, in a New York Times article, just prior to opening night, Stone said that he was inspired by the film “The eternal sunshine of the spotless mind”, which used a surrealist aesthetic to create a visible representation of madness. Similarly, in this production, the set was rotating on a turntable, constantly in motion.

Unfortunately, what Stone gained in the tangible representation of insanity he lost in character development. For the first half of the opera, including crucial scenes like Lucia’s act one duet with Edgardo as well as her act two duet with Enrico, the set kept moving which lessened the music’s ability to convey the drama. This was particularly true of Lucia’s confrontation with her brother which took place in their house, at least until the house was literally moved offstage, forcing them to move to the front yard, in order to be seen. This was especially unfortunate as it took away from this production’s main achievement, its depiction of the truly brutal relationship between Lucia and her brother. Stone emphasized the brutality Lucia faces at the hand of her brother, which reminded the audience that Lucia’s relationship with Enrico, not Edgardo is the focal point of the opera. As Enrico, Artur Rucinski frequently slapped his sister or dragged her to the ground. Normally repetitive gestures can grow stale, but the fact remains that being explicit about Lucia’s familial abuse to such a degree, is a novel idea so repeating these acting choices was refreshing. Rucinski could also be commended for singing with a firm grasp of Bel Canto style. His ability to hold onto the appoggiatura which caps his Cabaletta, at the end of the first scene, was just short of superhuman.

Nonetheless Stone deserves much credit for putting the horror and grotesquery back into Lucia’s Mad Scene. He did this by taking an old trope and bringing it to its extreme logical conclusion. As opera lovers, we are used to seeing Lucia go mad in a bloody nightgown or wedding dress, but in most productions, including Mary Zimmerman’s most recent one at the MET, whatever virginal garment the soprano happens to be wearing still retains its purity. The wedding dress is still very much a wedding dress and the same thing can be said for the nightgown. If anything they are ornamented with a few splashes of blood. However, here it was as if Lucia had met Stephen King’s Carrie. As Lucia, Nadine Sierra was bathed from head to toe, in blood. Not only was this frightening, but it’s also a strong reminder that Lucia technically stabbed her husband, upwards of 30 times. For any human to do that, torrents of blood must flow. Even more disturbing, Lucia’s role in this production did not end with her mad scene, and no she did not return as a ghost at the end of the opera to be with Edgardo, in some kitschy romantic gesture as he dies in the hope of reuniting with her in heaven. In contrast, here Lucia shoots herself in full view of the audience while up close on a video camera during the orchestral introduction to Edgardo’s tomb scene. This is truly mind blowing because normally the audience doesn’t see Lucia die. It happens off stage. At worst, this has the effect of making the audience feel that she must die because this is an opera. In this production of the opera, Lucia’s death was portrayed as what it’s supposed to be, the natural gory end to the life of an abused young girl.

As Lucia, Nadine Sierra brought out the sweetness and naivety in her role. This only heightened her desperate circumstances, bringing them into sharper relief. That’s not to say that she is a typical light-voiced coloratura. Her instrument has a certain level of depth to it which transfixes the listener. Similarly, Javier Camarena matched her as a youthful and inexperienced Edgardo. He brought a degree of sweetness to the role, which other tenors eschew, choosing instead to concentrate on Edgardo’s rage. In the pit Riccardo Frizza gave a particularly delicate reading of the score, although he was capable of bringing energy when needed.

A new production of a canonical work is typically a cause for cautious optimism. Today, Opera companies commission these productions, in hopes of unearthing contemporary relevance. Unfortunately, more often than not, these efforts lack clear dramatic intent. In other words, anyone can stage a 19th-century Italian opera in modern dress, but is there a reason to do so? Fortunately, in Stone’s new production, the MET has given us a Lucia for the ages. True, that might be hyperbole, but this production does what good opera productions should always do, utilize the setting to make the story speak to the audience in a way that is true to what originally excited the composer and librettist. Over the centuries, Lucia and her madness might have become cliché, unfortunately, as Stone and the MET remind us, the reasons for her madness are all too real and still affect us today.