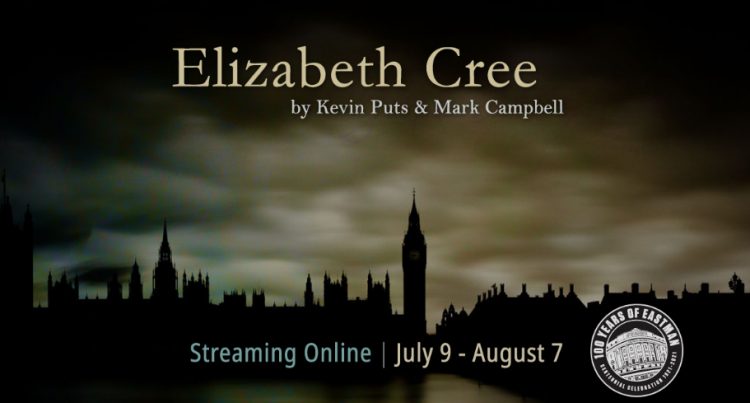 As opera lovers we are sometimes painfully aware of the role that death plays in our beloved artform. It has even become a punchline. Browse the Julliard bookstore for instance and you will see books about opera with titles like Weep, Shudder, Die. But, funnily enough, in an artform seemingly obsessed with death and in many cases murder specifically, there are very few operas about serial killers. True, Berg’s Lulu features a cameo from Jack the Ripper, but he only appears in the end and his chief function is to kill the leading lady. In another case, Lucrecia Borgia technically poisons all her guests at a dinner party. But that point is overshadowed by her grief when her son, who has accidentally poisoned himself along with everyone else, refuses the antidote. This, of course, leads to a flashy aria for the soprano.

This new chamber work was recently performed at University of Rochester’s Eastman School of Music.  Elizabeth Cree is available from July 9th through August 7th.  It was composed in 2017 with music by Kevin Puts (an Eastman graduate in ’99 with a Doctor of Musical Arts) and a libretto by Mark Campbell. It tells the story of Elizabeth Cree, The Limehouse Golem, a music hall performer in 1880s London whose victims include a prostitute, a wealthy family, other members of her theatre troupe and, perhaps most importantly to this reviewer, her husband–a theater critic.

Yes, it is a shame he must die but at least critics finally get to share the stage with the singers. And I am sure many a soprano has indulged in daydreaming about murdering a critic on occasion.

All jokes aside, the piece is an incredibly well constructed chamber opera with a musical range that runs the gamut from dense, foreboding choral writing for the crowd scenes such as Elizabeth’s trial and execution to rich, melodic arias for Michael Aiello playing Elizabeth’s husband John and music hall ditties which are reminiscent of Thomas Adès homages to Cole Porter in Powder Her Face. Aiello has an extremely rich and smooth baritone voice which he used to serve the creepy lyricism of his arias where he rhapsodizes about murdering “his” victims.

At the center of this work is a mezzo-soprano ingénue, here played by Kyrsten Chambers Jones. Her silvery voice lulls the audience into a false sense of security by soliciting empathy. In terms of operatic villains, this is a refreshing change of pace. To be sure, opera is full of mezzos as evil masterminds. Look no further than the old cliché that mezzos play either ‘bitches, witches, [or wear] britches.’ However, in most cases there is no mistaking that the mezzo is playing a villain.

By contrast in Elizabeth Cree, we instead have a musical depiction of a cunning and unsuspecting killer. Jones utilizes her plaintive mezzo to convey a seemingly vulnerable and sympathetic leading lady.

Jones’s true coup de théâtre was essentially an acting challenge.  In the opera’s final scenes, it comes out that Elizabeth framed her husband by writing about the murders in his journal. To make this painstakingly clear to the audience, Jones had to stand on stage looking innocent while she mouthed the text to Aiello’s aria. It is chilling in the first place to hear someone sing so lyrically about brutal murders. It is even more sinister to hear a lyric baritone voice sing of the ecstasies of killing through the mouth of an innocent. Opera lovers are certainly used to vocal gender-bending as a theatrical device–look no further than Cherubino in The Marriage of Figaro or the many countertenors and mezzos who play Handel’s aristocratic heroes in modern performance. However, in those cases the higher voices were used to portray characters who were either naïve boys going through puberty or wise rulers who were above the rest of society, more Gods than human. This is the first instance that I have seen where a male voice is used to heighten the portrayal of a woman as the true villain.

The opera was very much like Sondheim–both in the way the music was written and how the piece is structured. As with most of Sondheim, the basis of much of the music is an ostinato figure combined with sparce orchestration. It is also conceptually in the mold of a Sondheim musical; for instance, the final scene depicting Elizabeth’s hanging is staged like a vaudeville skit in a manner that recalls the second act of Follies. Similarly, the production directed by Stephen Carr capitalized on the theatrical metaphor, emphasizing the very public nature of Elizabeth Cree’s death. For instance, during the scenes that take place in the courtroom, the judge and others who interrogate the witnesses are perched at a high desk, making it clear that they are looking down. Additionally, the chorus is seated in the auditorium while the soloists are on stage. This simultaneously promotes social distancing while emphasizing the idea that the members of the chorus are members of the public commenting on the action. While the entire cast wore masks for the performance, only the chorus wore masks that covered their entire faces. This made the chorus truly anonymous bystanders watching the trial unfold.

As Eastman performance demonstrates, Elizabeth Cree is a powerful new chamber opera. The piece is full of twists and turns that in the end create a truly haunting work that sticks with the viewer long after the performance. Opera lovers who enjoy a good scare should definitely see this.

Elizabeth Cree is available from July 9 through August 7th.