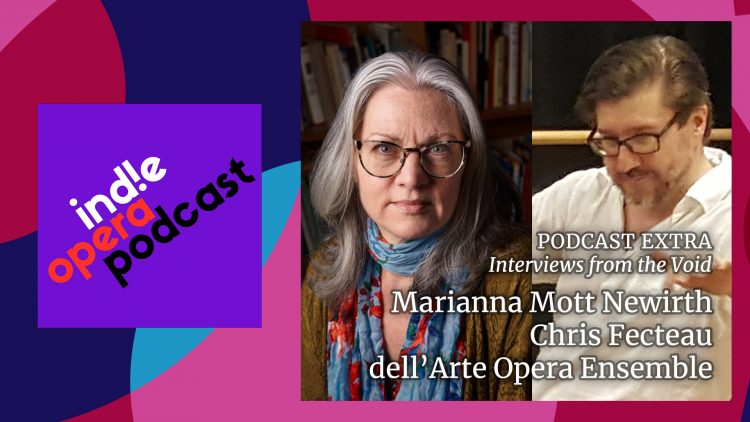 In this interview we hear from Chris Fecteau and Marianna Mott Newirth of dell’Arte Opera Ensemble about how they made their way through the worst of the pandemic by keeping to their core mission of singer development. They offered Zoom classes to all  season 2020-2021 artists including: vocal coaching on festival and standard repertoire roles; Wiki-translation project; Spanish & Italian language coaching; Chuck Hudson Acting for Opera; and “Juana’s Second Dream” Book Club.

“Songs from Hibernation”, a live-stream recital series was created for their 2020-21 artists to present mini-recitals of a half-hour in length, featuring repertoire from a broad range of composers. Each singer presented some of their old favorites, as well as new works they’ve discovered as they explored literature by BIPOC and Women composers.

Recent developments in 2021 include: Marianna Mott Newirth was promoted to Executive Director, A Summer Garden Recital Series was presented in Washington Heights/Inwood and an Audio Equipment Grants Program to provide artists with extra resources to successfully migrate to an increasingly “virtual” performing world.

An aria (with chorus) sung by El Alma, who is the soul of Sor Juana. El Alma is an androgynous spectre who foretells coming events, much like a Greek chorus, through Sor Juana’s own poetry and Plato’s Symposium. In this aria, which precedes Sor Juana’s trial before the Inquisition, El Alma sings of the perils of those who seek recognition, fame and infamy.

Since its founding in 2000 by Artistic Director Christopher Fecteau and Managing Director, Karen Rich, DELL’ARTE has focused on integrating the skills all singers must master into a comprehensive role preparation process by:

Providing role preparation guidance, from audition and casting, through coaching and rehearsals, to debut performances;

Providing singers with a comprehensive professional context for effective collaboration with the highest expectations and standards.

Participants in our singer-development programming receive a unique and carefully structured curriculum of private coachings and masterclasses with industry professionals designed to address practice methods, diction, musical style, movement and character development, thus preparing them for a career in an increasingly competitive opera world. Unlike many other programs, ours charges no fees and does not require singers to leave New York City.

Since its inception in 2000, more than 400 singers have benefited from dell’Arte’s programs. Of these, more than 30% perform regularly in opera houses and concert halls throughout the US and internationally, including LA Opera, Sarasota Opera, Deutsche Oper Berlin, the Royal Opera House (London) and Bel Canto at Caramoor. At least 10 have had Metropolitan Opera debuts and many are now on faculty at universities around the country.