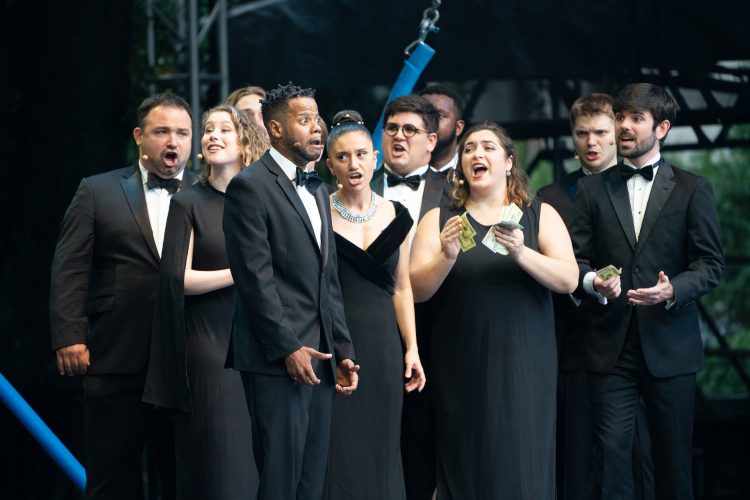 Every opera lover has their own story about how they first fell in love with the artform. However, it is safe to say that many of us got our first exposure to it from Looney Tunes, specifically cartoons like “What’s Opera Doc?” and “The Rabbit of Seville”. The latter is predominated by Rossini’s sparkling overture to The Barber of Seville. When an opera is so well known that it becomes part of popular culture, it may have an unexpected draw back. While it’s always good to allow a wide audience the chance to learn about Opera, the fact that Looney Tunes has allowed most of us to get to know the Barber of Seville from childhood also means that the score, or more specifically a certain way of performing it, has become part of our collective memory. As a result, it is easy to fall into the trap of thinking we know exactly how The Barber of Seville should be performed.

Enter Teatro Nuovo. Now in its third season, the company, founded by conductor Will Crutchfield, is dedicated to performing Bel Canto opera in ways that eschew modern performance traditions. In Philip Gossett’s book, Divas and Scholars, he discusses the pitfalls of tradition. He cites one of the cadenzas from the mad scene in Lucia di Lammermoor; in which she quotes the theme of the love duet which ends Act I. That cadenza has now been recorded by many major coloraturas, including Maria Callas and Beverly Sills. However that ornament did not originate with Donizetti but with Nellie Melba–the great Australian soprano from the early 20th century. Evidently after she interpolated that ornament it was so well received that other singers copied her. At some point it became so common that that specific embellishment was affixed to the score. Ironically, not only does this negate the fact that this specific embellishment was not written by Donizetti, but it also to some extent negates the improvisatory excitement that is an innate part of ornamentation.

But for the pandemic, Teatro Nuovo would’ve performed a concert version of Rossini’s masterpiece “Maometto II’ (1820). As it happened the group decided to return in 2021 with The Barber of Seville.  It’s rare for Teatro Nuovo to showcase something so well known, but due to the chaos of the past year, it makes sense that Teatro Nouvo would want to present a bit of operatic comfort food as live performances return to the city. It should be noted that these performances held in Damrosch Park on July 27 and 28, mark the first time since the pandemic that live opera was heard in Lincoln center.

With all that said, Teatro Nuovo deserves high praise for this production. It truly was an evening that challenged all preconceived notions about Rossini’s evergreen comedy. Both singers and orchestra worked as a cohesive ensemble to do away with centuries of tradition in both the vocal and instrumental writing. This performance shed a new light on everything from ornamentation to tempi, to the voice types we normally associate with this opera.

The tempi for certain famous sections were remarkably slow. Normally, sections like the patter in Doctor Bartolo’s aria, “A un dottor sella mia sorte”, are taken much faster. While this has the bonus of turning a bel canto opera into an Olympic display of skill, what you lose in speed, you gain in time to portray a character. In this case, the Doctor sung by Scott Purcell, became more like someone who would tie Rosina to the train tracks. This gets back to what seems to be the entire mission of Teatro Nuovo: not simply to present the score of The Barber of Seville in a renewed light, but more specifically to show that yes–it is a Bel Canto opera, and yes—that means that stylistically there is a premium on the voice and what it can do. But that doesn’t necessarily mean that singers need to showcase the athletic capabilities of their voices, but rather what they can do to communicate the drama of the story being told.

The matter of ornamentation extended even to the orchestral accompaniment. Led by Crutchfield and violinist Jakob Lehman, the orchestra highlighted rarely heard details in the score ; whether it be the twittering of the woodwinds in the stretta that ended Act I, or specific ornaments just done by individual instruments on repeats of certain phrases. It was hard to tell if this was due to research on the part of Teatro Nuovo or if this was simply due to the nature of performing an opera in what is basically a concert format. The orchestra was on stage (and not in a pit) and therefore certain details in the instrumental music could shine brighter than in a fully staged production.

In a performance of a Bel Canto opera today, the goal of much of the ornamentation is to be flashy and to show off the upper extremes of the singer’s voice. This is why modern audiences put a premium on cadenzas, they allow for vocal fireworks which culminate in an extremely high note on a cadential phrase. Here by contrast, not only were most of the ornaments new, but the placement and the scope of the embellishments were novel. They didn’t focus on showcasing the extremes of the voice, rather, they showcased what the voice could do within the context of a musical phrase. It wasn’t until “Dunque lo son”, about a third of the way throug Act I that Hans Tashjian, as Figaro sang an ornament that had previously been performed by the likes of Sherrill Milnes and Dmitri Hvorostovsky. Even so it is rare to hear those rapid-fire sixteenth notes in a performance.

Teatro Nuovo’s innovation extends not just to how the barber of Seville is sung, but also the voice types that sing it. Here, Figaro, Dr. Bartolo, and Don Basillio, were sung by basses. This is because in Italy circa 1816 baritones as a voice type were not yet in existence. That said, neither were any of these singers basses in the modern sense of the word. Rather, they possessed light voices capable of going into the depths of the bass voice when necessary. This is especially true of Tashjian.

The evening also featured some additions to well known arias like “Una voce poco fa”, this time performed with an added coda. We all know Rosina. We know that she is wily and not someone to be toyed with. But, in past productions, her cunning personality was mainly conveyed through ornaments that we have honestly heard a thousand times. What is interesting about this coda is that it added a bit of orchestral heft and darkness to the aria–bringing it more in line with something like “The Queen of the Night’s” Vengeance Aria from The Magic Flute. In that aria, we tend to focus on the coloratura fireworks, however the orchestration, though sparce, is frightening. As Rosina, Hannah Ludwig showcased her engrossing Mezzo voice, which had a burnished quality to it. She was matched by Nicholas Simpson who brought sweetness and sensitivity to Count Almaviva.

What is interesting about this rendition of “Una voce poco fa” is that it lacked one crucial word: “ma” which means “but” in English. Thanks to tradition, this word, and its placement within the aria, as a conjunction which connects Rosina’s letter writing to what she really is capable of doing when crossed, is something of a vocal acting challenge for the singer; to give their own interpretation to this “but.” And how they sing it tells us much about how they view Rosina.

At first I thought this must just be something that was not originally written by Rossini—another way the company presents opera as close to its original composition as possible. But then, in Act II, the “ma” appeared in Berta’s aria. While expertly sung by Alina Tamborini, it must be noted that the aria “​​Il vecchiotto cerca moglie” was originally a “sherbert” aria. These were arias that were given to secondary characters, typically in dramatic situations that were contrived to allow time for the set to change. These arias served two purposes, they gave more stage time to a singer in a secondary role and allow the audience to be entertained as necessary backstage business was conducted . The reason for the term, “Sherbet Aria”.is that while they were being performed, the audience would literally get up and go to the concessions for ice cream. It’s interesting to realize that a musical phrase that has become such an integral part of a famous aria was not originally written for the aria it now has come to define.

Singers who tackle well known roles face two challenges. Not only do they have to surmount the vocal hurdles of the characters they’re playing, but they also have to compete with an audience who is listening to them while simultaneously playing their favorite recording in their head. If Teatro Nuovo’s performance could be said to have a moral, it is this; opera has existed for over 400 years because throughout the centuries numerous singers have brought their own interpretations to these classic works. However, as groundbreaking as those interpretations may be, they should never codify a role and be the standard by which all other performances are judged.