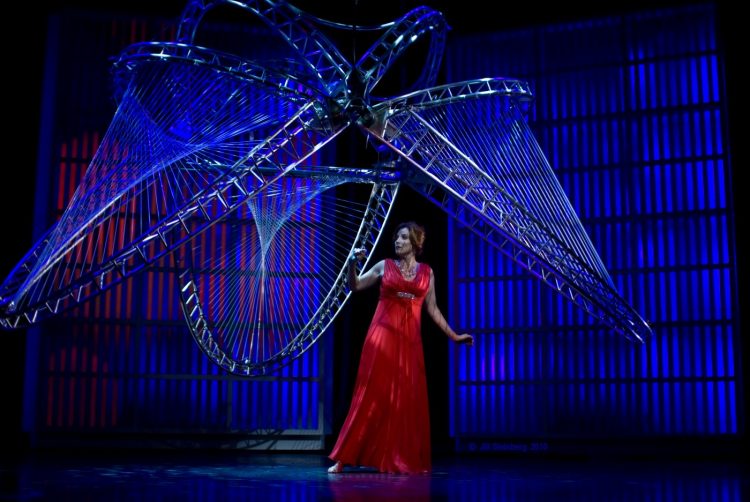 Death and the Powers is the latest and perhaps most ambitious operatic take on humanity’s relationship with science, immortality, and miracle cures.  Even so, reading the phrase “Tod Machover wrote an opera about robots starring robots” may cause as much confusion and consternation among readers as it caused me to write that. However, I would argue that this trend goes all the way back to Tchaikovsky and the late romantic era. Death and the Powers is the most ambitious incarnation of this trend. Unfortunately, the results were mixed. Furthermore, given the scope of what Machover tried to achieve it is hard to offer suggestions on how the piece might be improved. Nonetheless, I do have a hypothesis; Simply put, perhaps this opera is better served in live performance than by a recording.

Before going any further and discussing the opera on its own terms much needs to be said about Machover’s humanistic endeavors. For the sake of objectivity, I am writing this as a man who not only loves opera, but also has a disability. I have cerebral palsy and use a wheelchair. It would take another article to explain the intimate connection between my love of opera and my CP. Suffice it to say that the one has made it easier to thrive while living with the other.

Those who know me have heard me say on many occasions that if things were different, I would have loved to have been an opera conductor. Frankly, I became an opera critic so that I could at least have a voice in this field that I am so passionate about. With all that said, Tod Machover is a mensch. According to his bio, through his position as Academic Head of the Massachusetts Institute of Technology (MIT) Media Lab he’s been deeply involved in developing musical technologies and concepts for medical and well-being contexts, that are helping to diagnose and reverse conditions such as Alzheimer’s disease or allowing people with cerebral palsy to communicate through music.

Given that technology, music and even disability are intertwined in Machover’s work it makes sense that he would write an opera in which Simon Powers, an ailing scientist who fears death wants to have his consciousness uploaded to the Cloud in a bid for immortality. From there the opera attempts to explore the standard philosophical questions, is Simon Powers a man, a machine, a mixture of both and what does this mean to his family who are still human. It’s a powerful, timely story, at least on paper. Transforming that story into an opera is where things go awry.

One could argue that Tchaikovsky started this trend in his final opera, Iolanta. In that opera, a French medieval king locks his blind daughter in a pleasure garden with no outside world contact in a bid that she won’t discover that she’s disabled. However, she falls in love with a prince who convinces her to undergo a religious ceremony where a monk will cure her. If you remove the fairytale setting and replace the religious ceremony with a scientific procedure you have, I will argue the world’s first sci-fi opera.

In the 1920’s Leos Janacek composed The Makropulos Case. Today, although the opera is rarely performed it is considered to be a diva showcase; the last time it was performed at the Metropolitan Opera no less than Karita Matilla sang the title role. Based on a play by Karel Capek, it tells a story of a 300 year old opera singer. The daughter of an Alchemist who worked at the Hapsburg court, Emilia Makropulos was given an elixir of immortality as a child. Unfortunately, 300 years later immortality has lost it’s charm and everything, including sex i s boring. As a result, when she finally finds a way to die at the end of the opera, her final moments are kind of an ecstatic parody of the conclusion to Wagner’s Tristan and Isolde. The finale of The Makropulos Case shows that it is possible to live too long and that death is an integral part of life.

A more contemporary work is Philip Glass’s The Perfect American whose world premiere occurred shortly after Death and the Powers. In this opera, an ailing Walt Disney comes to terms with his mortality in a duet with a malfunctioning animatronic Abraham Lincoln.

It should come as no surprise that Death and the Powers was recently recorded by the Boston Modern Orchestra Project. The piece is short, clocking in at just under 90 minutes, however, it is perhaps the most involved recording of BMOP’s recent releases. This is very different from their recording of Gounod’s La Reine de Saba.

The main flaw of this opera which perhaps explains why it might fare better in live performance is that the depiction of robots is too literal and requires too much technology. As a result, the musical imprint of the robots on the score impedes the music’s ability to communicate the drama. Considering it from this angle the music of the robots exemplifies a problem that opera has had to contend with four centuries. In Death and the Powers the musical depiction of the robots is akin to word painting, this compositional technique from the Renaissance refers to music which mirrors the text instead of exploring it’s emotional content. To put it another way, in Death and the Powers, listeners can tell from the music that robots are integral to the plot. However, it’s very hard to distinguish anything about their emotional journey or for that matter how they relate to the humans with whom they share the stage.

How does Machover depict robots through music; his efforts create a mixture of white noise and computer generated frequencies. In addition, Machover employs  a combination of vocal timbres and repeated fragments of rhythm and this creates a collage which harkens back to two methods of composing electronic music established by Edgard Varese in France, and Karlheinz Stockhausen in Germany.

Varese and Stockhausen tackled electronic music from two different angles. In his magnum opus Poeme Electronique, Varese used a tape recorder to record sounds of Parisian city life, he then took the tape to his workshop and manipulated it, cutting it in certain places and looping it in others to “compose” the piece. Poeme Electronique has become the poster child for musique concrete.

Meanwhile, over in Germany, Stockhausen was composing elektronische musik. Basically, this was using a computer to generate a combination of sound frequencies and white noise.

Now, having diagnosed the problem, it is very difficult to offer solutions. This is because it is understandable that Machover should want to make use of all the technology at his disposal in order to depict the robots. Honestly, it is a question that requires much more thought than a simple review like this. With that said, there needs to be a better marriage between modern technology and standard compositional techniques. There are some old school methods that can be used to dramatically depict machines, the strong rhythms in The Rite of Spring come to mind. But again, that is a purely acoustic compositional tool.

In particular, Machover’s music in places obscures the voices. In an opera this is problematic. Sadly, this makes it difficult to even judge the singers on their own merits. Although James Maddalena, whose storied career includes creating the lead in Nixon in China, emphasized the hubris which causes the lead characters downfall.

Those characters that remain human fared better simply due to the lack of technology in their music, as well as the lack of engineering manipulation of their vocal parts. Of these, Joelle Harvey who sings Miranda, Simon’s daughter, deployed her sweet soprano to highlight her character’s pathos. In this regard, she made the most of the sparse baroque-like accompaniment of her aria heard in Scene Eight: One Last Time, where she mourns not so much her father’s death, but the absence she felt caused by his obsession with immortality.

One final note about the operas structure. It is a play within a play that occurs in the far future. The problem is that there does not seem to be a reason for the opera to take this form. Typically, a play within a play serves a greater purpose. Take for example, Corigliano & Hoffman’s The Ghosts of Versailles. In it, the ghost of Beaumarchais presents another Figaro play in the hopes of helping Marie Antoinette to come to terms with her untimely death. However, in Death and the Powers it is unclear why the robots are watching this opera. For that matter, it is difficult to discern what kind of future the robots are living in. The casual listener would be forgiven for assuming that the robots have overtaken humanity. But this isn’t necessarily the case, apparently the robots are commanded to watch this play annually by their departed human creators to gain “human rights status credits”. By the end of the play, the robots remain as confused as we the human listeners are.

Taken as a whole, Death and the Powers is a solid but flawed exploration of the relationship between opera and technology. Machover’s work here is noble. It offers an exciting look into the next phase of opera as drama through music. However, this is a first effort, and as such the connection between music and drama needs to be tweaked and refined. Nonetheless, we should all look forward to the possibilities Death and the Powers offers for Opera’s future.