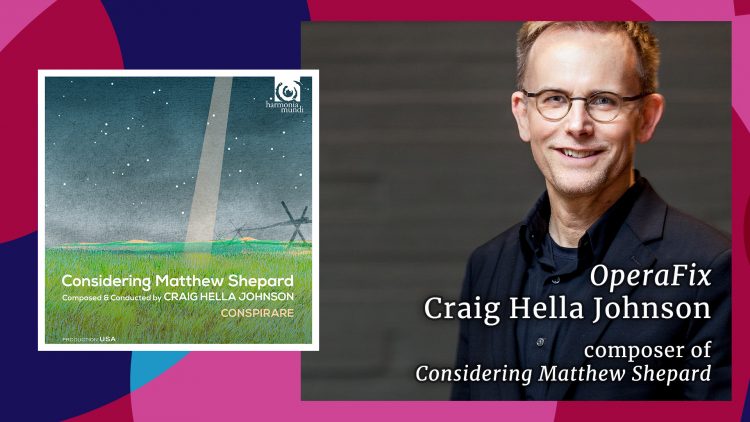 With me today is Craig Hella Johnson to talk about the creation of his oratorio Considering Matthew Shepard which is receiving its NY Premiere on November 6th by The Dessoff Choirs.

Matthew Shepard was kidnapped and then murdered on October 6, 1998.

In 2012 Craig began work on this oratorio after receiving the approval of Judy and Dennis Shepard.

Craig wanted to include the fence as witness/observer and wondered how to make that concept work dramatically. He found Leslea Newman’s book which included poems from the fences point of view.

Leslea was in Laramie as the keynote speaker for University of Wyoming’s The Gay Awareness Week to discuss her book Heather Has Two Mommies the night that Matthew was murdered.

Craig approached Michael in the last six months of this work’s creation who assisted with shaping the libretto, writing new original texts solo or in collaboration with Craig.

World premiere – Austin, Tx February 2016, it was recorded soon after that.

Rewrites or revisions of the work since it’s premiere:

Conspirare performed for the interment of Matthew Shepard’s ashes in the Washington National Cathedral, October 26, 2018.

Clip link 1: Prologue, 3. We Tell Each Other Stories

Considering Matthew Shepard: Prologue, 3. We Tell Each Other Stories

Craig Hella Johnson is the Founding Artistic Director and Conductor of Conspirare and Music Director of Cincinnati’s Vocal Arts Ensemble. Known for crafting thought-provoking musical journeys that create deep connections between performers and listeners, Johnson is in frequent demand as a guest conductor of choral and orchestral works.

Johnson joined the faculty at Texas State as Artist in Residence in fall 2016. He is a published composer and arranger, guest conductor and educator. Johnson’s first concert-length composition Considering Matthew Shepard was premiered and recorded by Conspirare for a 2016 CD release.

Johnson’s accomplishments have been recognized with numerous awards and honors. Notably among them, he and Conspirare won a 2014 Grammy® for Best Choral Performance, Chorus America awarded him the Michael Korn Founders Award for Development of the Professional Choral Art in 2015, and the Texas State Legislature named him 2013 Texas State Musician.

Conspirare is a professional choral organization under the leadership of Craig Hella Johnson. Inspired by the power of music to change lives, this ensemble engages singers from around the world who join voices to deliver world-class, extraordinary live musical experiences and recordings.

Their discography includes 13 commercial albums and 19 self-produced live albums. Conspirare was awarded the Texas Medal of Arts in 2019. Johnson and Conspirare were awarded a 2014 Grammy® for Best Choral Performance for The Sacred Spirit of Russia album and have been nominated eight other times. Conspirare’s most recent recording, The Hope of Loving, features works of Jake Runestad and received a 2020 Grammy nomination for Best Choral Performance.

Based in Austin, Texas, they perform an annual concert series there and tour in the United States and abroad. Conspirare has performed throughout the U.S., including appearances as a featured choir at the American Choral Directors Association annual conference and regional ACDA conventions. The group is also committed to an ongoing outreach program which includes free community Big Sings and performances at Travis County Correctional Facility. In 2013, Conspirare became a Resident Company of Austin’s Long Center for the Performing Arts.

Conspirare is a growing organization, which now includes the Conspirare Symphonic Choir, the Conspirare Chamber Orchestra, and Conspirare Youth Choirs, an educational program made up of three choirs (Prelude, Kantorei, and Allegro) under the direction of Nina Revering.