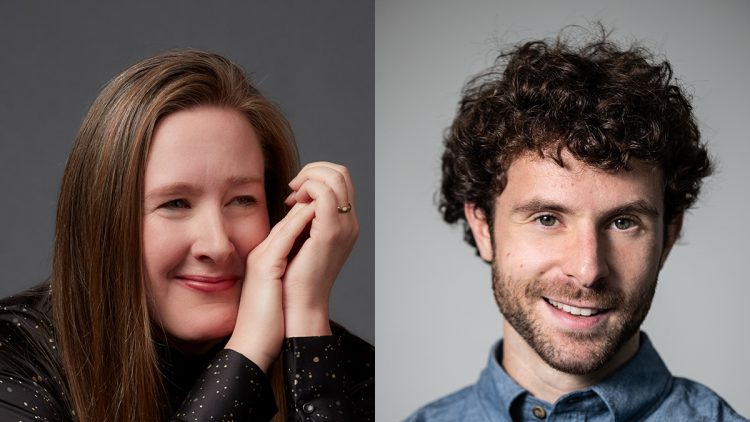 We welcome Sarah Ruhl, librettist and playwright, and Matthew Aucoin, composer, the two creators of a new version of Eurydice at the Metropolitan Opera. We discuss the history and meaning of this oft-adapted myth, and what drew both writers to it. We delve into their creative process and discover why Sarah chose to make some key changes to the story and characters. We also get a peek into how the two adapted Sarah’s original play into the current libretto, and how Matthew approached setting her text to music. It’s fascinating to hear about the piece’s long journey from its creation to its premiere at LA Opera with Mary Zimmerman directing, to the current remount at the Met. Both writers also have new books out, which should be on everyone’s reading list. Don’t miss this captivating conversation with two of opera’s most vital and thrilling creators.

Listen to the audio version here:

Walker: What do you mean that this story is always happening?

Peter: What was your reaction to Sarah’s original script Matthew?

Brooke: Eurydice is given her own thoughts and independence in this version.

Walker: Were you influenced by the versions of this story in writing and film?

Walker: How did you start to create your sound world for this opera?

Peter: How much did the opera libretto hew to the original script?

Peter: How was the first rehearsal at Met Opera? Is this the same production as done at LA Opera?

Matthew: Crossing, his first opera received many rewrites because of some mistakes when creating the libretto.

Walker: What was the process of working with Mary Zimmerman like?

Brooke: In Twyla Tharp’s book, The Creative Habit she writes that the worst thing she ever did is where she had an unlimited budget.

Walker: How do you think your play has changed from being morphed into an opera? Does it come across with a different meaning or overtones?

Peter: How did the melodies and music come together?

Brooke: Let’s talk about the new books you both have out now.

Description: End of Chapter One: Twins

Walker: How did having the twins affect Sarah’s ability to write?

Matthew: His book was written during the pandemic as a way to stay connected to the art form of opera.

Peter: What are your future projects?

Peter, Brooke & Walker discuss the production of Fire Shut Up In My Bones

Performers in clip: Will Liverman as Charles & the Male Dance Ensemble

Clip Credits: From the final dress of Fire Shut Up In My Bones, Act 3, choreography by Camille A. Brown, Metropolitan Opera 2021

Description: Aria – “Leave It On the Road”

Peter, Brooke & Walker discuss score/orchestration of Fire Shut Up In My Bones

Peter, Brooke & Walker discuss Matthew Aucoin’s essay about The Marriage of Figaro from his new book The Impossible Art: Adventures In Opera

Sarah Ruhl is a playwright, and writer of other things. Her ten plays include In the Next Room or the Vibrator Play, The Clean House and Eurydice. She has been a two-time Pulitzer prize finalist, a Tony award nominee and the recipient of the MacArthur “genius” award. Her plays have been produced on and off-Broadway, around the country, internationally, and have been translated into over fifteen languages. Her book 100 Essays I Don’t Have Time to Write was a Times Notable Book of the Year. She has received the Steinberg award, the Sam French award, Feminist Press under 40 award, the Playwright of the Year from the National theater conference, the Susan Smith Blackburn award, the Whiting award, the Lily Award, and a PEN award for mid-career playwrights. You can read more about her work at www.SarahRuhlplaywright.com. Her most recent book is Smile, the story of a face. She teaches at the Yale School of Drama, and she lives in Brooklyn with her children and her husband, Tony Charuvastra, who is a child psychiatrist

Matthew Aucoin (b.1990) is an American composer, conductor, writer, and

pianist. He  was awarded a MacArthur Fellowship in 2018, and is both Artist-in-Residence at Los  Angeles Opera and co-artistic director of the American Modern Opera Company. Aucoin’s newest opera, Eurydice, a collaboration with the playwright Sarah Ruhl, had  its world premiere at the Los Angeles Opera this past February, and will travel to the  Metropolitan Opera in the 2021-22 season.

The role of Artist-in-Residence at Los Angeles Opera, created for Aucoin, fuses his  work as composer and conductor. Aucoin has conducted LA Opera mainstage productions ranging from Verdi’s Rigoletto to Philip Glass’s Akhnaten; he has also conducted  his own works, including the opera Crossing, and founded a new late-night concert series, AfterHours. In addition, Aucoin coaches the singers in LA Opera’s Young Artist  program, and advises the company on new music.

The American Modern Opera Company (AMOC) is Aucoin’s newest project: an ensemble of some of the rising generation’s most exciting singers,

instrumentalists, and  dancers. In Aucoin’s words, AMOC is “an opera company, a new-music ensemble, a  rock band, and a touring theater troupe, rolled into one.” The ensemble has an annual  festival at Cambridge’s American Repertory

Theater, and has been in residence at the  Park Avenue Armory and Harvard University. Aucoin and AMOC are at work on commissions from the Philharmonia Baroque Orchestra and San Francisco’s ODC Theater.

Aucoin’s orchestral and chamber music has been commissioned and performed by  such artists as Yo-Yo Ma, Zurich’s Tonhalle Orchestra, Salzburg’s Mozarteum Orchestra, the Brentano Quartet, the Los Angeles Chamber Orchestra, the

Second Nature has been performed all over the continent, including productions at the Canadian Opera Company and the Music Academy  of the West.

In addition to his work in Los Angeles, Aucoin regularly guest-conducts nationally and  internationally. This past summer, Aucoin made his Santa Fe Opera conducting debut  leading John Adams’s Doctor Atomic, in a new production by Peter Sellars. He has  also appeared with the Chicago Symphony, the Los Angeles Philharmonic, the Los Angeles Chamber Orchestra, the Rome Opera Orchestra, the Music Academy of the  West, and Juilliard Opera, among others. This season, Aucoin conducts and curates  the San Diego Symphony’s annual festival, entitled Hearing the Future.

Apprentice at the Chicago Symphony, where he studied with Riccardo Muti.