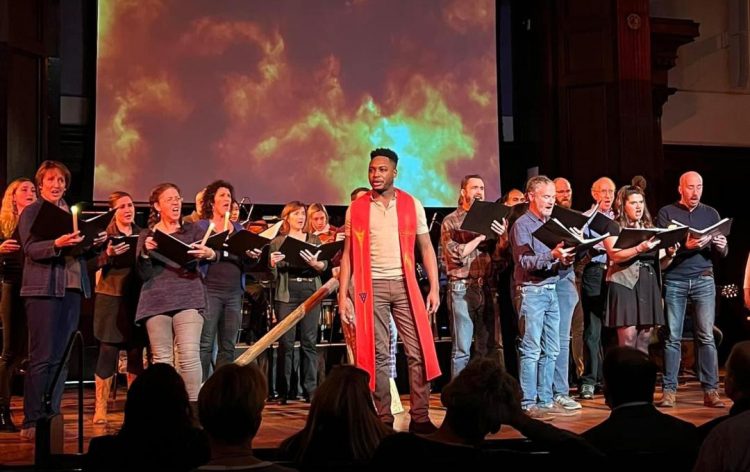 Say the word oratorio in casual conversation and chances are Handel & Mendelssohn are the first names to come to mind. The classic oratorios by those composers are typically centered on Biblical figures like Samson, Deborah, and Elijah, or early Christian saints like Theodora of Antioch. It is rare to find an oratorio based on the life of an ordinary person.

This is why Considering Matthew Shepard by Craig Hella Johnson is so noteworthy. To quote a line sung by the chorus near the beginning of the work, “Matthew Shepard never expected his life would be his story.”

For anyone who isn’t familiar with this tragedy, Matthew Shepard was a college student who in 1998 was the victim of a heinous homophobic hate crime. On October 6, 1998, after attending a meeting of the University of Wyoming’s Lesbian Gay Bisexual Transgender Association, he went to a bar where he met Aaron McKinney and Russell Henderson. Around midnight, they drove him to a deserted area; beat him and left him tied to a fence overnight. The next day, he was found by a cyclist who originally thought he was a scarecrow. He was taken to a hospital where he died after being in a coma for 5 days.

Considering Matthew Shepard is not the only theatrical work based on this horrific event. The Laramie Project, written in 2000, is a play by Moisés Kaufman and other members of the Tectonic Theater Project. The piece, which gets its name from the town where Shepard was murdered, is based on interviews that the theater company conducted with Laramie residents. The sources for the play also include public news reports, as well as journal entries written by members of the theater company.

Considering Matthew Shepard received it’s New York premiere performance on Saturday November 6, 2021, by The Dessoff Choirs at the New York Society for Ethical Culture.  A few weeks prior to the performance, The Dessoff Choirs hosted a seminar over Zoom, led by Malcolm J. Merriweather, who also conducted the performance, WQXR’s Elliott Forrest and Rod Caspers, who co-produced the performance, and the National LGBTQ Task Forces Communications Director Cathy Renna. Renna referenced a Tedx Talk she had done in 2014 where she discussed her reasons why she believed Matthew Shepard’s death garnered so much media attention. She believes the media attention occurred because he was ‘the All-American boy next door.’ His death, and its subsequent media attention led to the creation of the Matthew Shepard Hate Crimes Prevention Act in 2009 which expanded the federal protection of a 1969 hate-crime law to include crimes motivated by a victim’s actual or perceived gender, sexual orientation, gender identity or disability.

While writing the oratorio Craig Hella Johnson originally envisioned a piece modeled on the Bach Passions, however, those works all end with Jesus’ crucifixion. By contrast, as the works title implies in writing the piece Johnson wanted audiences to consider what Matthew Shepard and his story means to both their individual lives and their community. Matthew Shepard’s’ brutal murder is definitely part of that story, however, Johnson didn’t want to end the piece there as that is only one part of Shepard’s legacy.  To that end, Johnson wrote an epilogue which is meant to reflect a communal healing.

Considering Matthew Shepard resembles the Bach Passions – in particular the St. John Passion. Those familiar with The Death of Klinghoffer may know that Adams also based that opera on the St. John Passion – in particular he was drawn to the way that Bach used the recitative to tell the Biblical story while using the arias as a way to allow the contemporary listener to reflect on how they relate to Jesus’ suffering and death. Additionally, much like The Death of Klinghoffer where the story is told not so much by the lead characters as by others who observe events, Johnson’s oratorio includes the various perspectives of not only Shepard’s parents but the fence he died on as well as the deer that kept him company all through the night.

Musically, Considering Matthew Shepard contains a variety of styles. Everything from Gregorian chant and sprechstimme to blues, spirituals, and country music. This serves two purposes – not only does this mix of styles make the piece more accessible to listeners but it also reflects Johnson’s desire to create a community through music. It also needs to be said that Johnsons’ composition is noteworthy for the times where there was a lack of music. The narration of Shepard’s murder and the subsequent trial was set to spoken text, even more noteworthy was Matthew Shepard’s father’s speech to the murderers in the court room.  In oratorio, as in all classical vocal music, the interplay between spoken and sung text can serve to heighten the drama. In the case of Dennis Shepard’s speech, although it was underpinned by music, the fact that it was simply spoken by Jon Lowy, put greater attention on the words and served to emphasize the fact that despite what happened to his son – Dennis Shepard courageously faced his son’s murderers. The sections with Gregorian chant gave the piece the feel of a requiem. This was in no small measure highlighted by baritone Markel Reed’s performance. Despite his fach, his voice has a rich bass flavor, which brought to mind famous avenging characters of the operatic stage such as the Commendatore from Don Giovanni.

Tami Petty is an extremely versatile singer with a clear and penetrating soprano. She offered riveting performances of music ranging from blues as in “Keep It Away From (The Wound of Love)” to spirituals. In the latter case, most notably the first piece of the Epilogue: “Meet Me Here,” she sang several appoggiaturas with noteworthy control.

Conductor Malcolm J. Merriweather leading the performance brought sweetness out of the choir while offering a dynamic reading of the score which highlighted rhythmic passages while at the same time emphasizing melody and introspection in the slower, more contemplative movements.

When this piece was first premiered by Craig Hella Johnson’s choral group Conspirare in Austin in 2018, the piece was performed as a concert. By contrast, The Dessoff Choir’s performance was semi-staged and featured projections. Also, there was only one singer playing Matthew Shepard, Matthew Cahill, who possesses a warm baritone. In previous performances, particularly those at colleges and universities, Matthew’s role had been sung by multiple people. Again, this was to show that Matthew Shepard’s story could happen to anyone.

The projections created by Rod Caspers and Elliott Forrest added another dimension to the piece. They ranged from snapshots of journal entries in Matthew Shepard’s own handwriting, to various family photos, as well as news coverage and press clippings from his murderer’s trial, or photos of multiple mourners who visited the fence where he died.

It might not have been Craig Hella Johnson’s intention to write a piece that mourns Matthew Shepard, nonetheless Johnson did write a requiem. Matthew Shepard’s story is tragic but his death is only part of his legacy. Considering Matthew Shepard celebrates the life of it’s protagonist by building a community through music and showing how we all can relate to Shepard’s story.