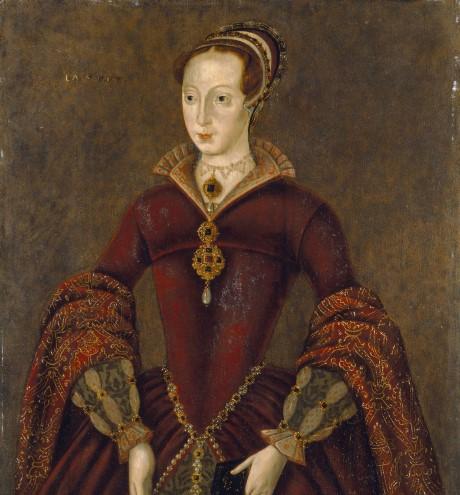 Lady Jane Grey, also known as the “Nine Days Queen,” was Britain’s first female monarch. She was crowned after the death of Edward VI, who was the son of Henry VIII and Jane Seymour. Edward was a militant protestant. As such, he didn’t want any Catholics (or women for that matter) to take the throne. Given that the Catholic Mary Tudor, Henry VIII’s eldest daughter, was next in line to take the throne, he rearranged the succession so that any sons of his protestant cousin, Jane Grey, would take the throne after his death. However, he died young, and in his final days—realizing that he wouldn’t live to adulthood—he changed the succession to include Lady Jane Grey and her male heirs. However, Henry VIII had made it clear that Mary was next in line for the throne, and as such she was seen even by the English populace (before she gained the moniker “Bloody Mary”) as the rightful ruler. It took Mary’s forces nine days to overthrow Jane Grey. Mary, now queen, threw Jane in prison not originally with the desire to kill her. But when Jane became a figurehead for several assassination attempts on Mary’s life, Mary signed Jane’s death warrant.

The story of Lady Jane Grey is the subject of composer Arnold Rosner and librettist Florence Stevenson’s opera, The Chronicle of Nine: The Tragedy of Queen Jane. (1984). The piece was recently recorded by the Boston Modern Orchestra Project (BMOP).

The reason why there are so many operas based on the Tudor royal family is because, much like today, they were known for their turbulent reigns. Many of the Tudor operas we know come from the Bel Canto Era (ca. 1800-1850). Think of Donizetti’s Tudor Trilogy. Chronologically, the world was still reeling from the chaos of the French Revolution of 1789, which famously beheaded two monarchs who were seen as anointed by God to rule. Prior to that, opera—in the guise of Opera Seria—bolstered the Divine Right of Kings by depicting royalty as noble just figures who suffered for the good of the state but ultimately came to happy endings.

The French Revolution proved that the royalty was still mortal. As such, the opera world had to grapple with human royalty. Therefore, the political and romantic tribulation of the Tudor family, most notably in the figures of Elizabeth I and Mary Queen of Scots, was seen as ideal for the operatic stage. This is because even if these characters did not die, they led tumultuous personal lives that did not necessarily end happily.

Loyal followers of Indie Opera have probably read my review of Gounod’s La Reine de Saba which was released by BMOP in a recording conducted by founder Gil Rose. It suffices to say that the group specializes in recording seldom heard operas by either canonical or contemporary composers. This year, Rose won a Grammy for his work with BMOP. Additionally, the company also presents themed seasons of live opera. Given that they recently devoted a season to the Tudor dynasty, it makes sense that they should record an opera about Lady Jane Grey.

According to the liner notes, the opera gets its title because nine is a sort of symmetrical number for the piece. Not only did Queen Jane reign for nine days, but there are nine historical characters in a work which contains nine scenes. The work is interspersed with ballets, orchestral interludes, and ballads in the style of court minstrels of the late renaissance. Structurally, these ballads play a crucial role in the piece. Each of the three acts begins with a courtly ballad summarizing the action to follow. This serves several purposes. To begin with, it gives the work the feel of an Elizabethan drama like Romeo and Juliet or Henry V, both of which feature a chorus summarizing the action. However, on a deeper level. This creates a contrast between a simple story being told, and the heightened emotion of the characters who experience the plot.

The orchestration is brilliant for its new take on older forms, this dialogue between the new and the canonical is present from the overture onward. Impressionistic chords reminiscent of Debussy come up against brass playing a regal fanfare. This is clearly a nod to Monteverdi whose Orfeo begins with a Toccata where the brass fanfare is nothing less than the musical symbol of Monteverdi’s patrons, the Gonzaga family who ruled Mantua. In the overture to the Chronicle of Nine however, the brass and strings are in a dialogue that is sometimes foreboding, sometimes antagonistic, and occasionally ceremonial. When taken as a whole, the overture feels like a modern take on a Pavane, a processional dance form that began in medieval France before spreading to the rest of Europe. In fact, dance music provides the baseline for several pieces in the opera such as the trio for Jane and her parents that opens act one.

In terms of the vocal music, the score owes a debt to Monteverdi. There are few formal arias as we would recognize them. Instead, the vocal lines are simple and unadorned direct reflections of natural speech such as we would find in Monteverdi’s Orfeo or Perri’s Euridice. However, the vocal line works in tandem with the orchestra to become more expansive and expressive as called for by the drama. This marriage of drama and direct musical representation of speech is a calling card of certain composers of contemporary opera like Tyshawn Sorey, whose“Save the Boys” and “Cycles of My Being”were recently performed virtually on the Opera Philadelphia Channel. This is one of the reasons why Sorey’s music is thrilling.

The Chronicle of Nine also contains a few standard set pieces which include ensemble and chorus. Most notably, these are Jane’s coronation and execution. The latter is particularly impressive. Here, Jane, sung by Megan Pachecano, whose sweet soprano emphasized the characters youth and naïveté bids the crowd a dignified farewell, while a chorus sings a requiem off stage. The scene also displayed a chorus of street vendors selling food for those who want to watch the execution. History buffs know from the French revolution that the many beheadings during The Reign of Terror had a grotesque carnival like atmosphere. But this is one of the few operas, with the possible exception of John Corigliano’s The Ghosts of Versailles to actually depict the gaudy nature of public executions. Even so, here the music is better suited to a funeral than a party. Despite the somewhat festive atmosphere everyone knows a child is about to die.

This piece has three strong female characters. Jane, a soprano, has to contend with two mighty mezzos: her domineering mother Frances and her cousin Mary Tudor. These women are portrayed by Rebecca Krouner and Stephanie Kacoyanis respectively. They show what two people of the same voice type can bring to different characters. Both women want power. However, Frances is a domineering mother trying to raise her daughter to be successful at court. By contrast, Mary Tudor has a much smaller role, but during her duet with Jane in the penultimate scene, she appears as a woman who has had to fight to stay on the throne and consequently has grown old before her time. As with the historical Mary Tudor, she does not necessarily want to kill Jane, but rather sees it as her only choice.

The organization of the male voices in The Chronicle of Nine is another crucial element of its structure. These characters fall into two categories: those whose power is at best nominal, and those who manipulate the political situation, whether on behalf of Queen Jane or Queen Mary. In the first camp we have the minstrel, Jane’s father Henry, and her husband Guildford Dudley, played by Gene Stenger, William Hite. and Eric Carey respectively. All these men are sturdy tenors with smooth lyrical voices who fit the profile of singers who specialize in early music. Stenger, in particular, would be ideally suited to the tenor soloist in Handel’s Messiah. On the other hand, Aaron Engebreth, who played Jane’s father-in-law John, possesses a rich baritone. He was a good match for Krista river, whose sweet but edgy soprano highlighted his wife’s conniving nature.

However, there was one important difference between the two; like Verdi’s lower voice aristocrats eg Macbeth and Simone Boccanegra, he fears he will get swept up in the volatile political current. As Queen Mary’s plotting supporters the Earls of Arundel and Pembroke, James Demler and David Salsbery Fry both possessed stentorian voices, making them both apt villains. Yet their religious devotion made them sympathetic. The two men’s discussion of omens is underpinned by a novel detail in the orchestra, namely the use of celesta. Despite it’s sweet sound, this bell-like keyboard can convey a range of emotion, whether it be peace in the love duet from Verdi’s Otello or characterizing the eerie ghosts in The Turn of the Screw. Here, it reflects the religious awe of Mary’s supporters. However, it returns later on to depict the uneasy serenity of Jane’s prison.

In the panoply of operas based on Tudor monarchs, The Chronicle of Nine is a unique addition. In it, the Tudor dynasty remains very fallible. However, unlike Donizetti’s Tudor operas, the downfall of these rulers is not personal or romantic, but rather solely a question of political acumen. Throughout its nine scenes, the work gives us an in-depth look at the pawns and puppet masters who wielded power during nine days that changed English history.