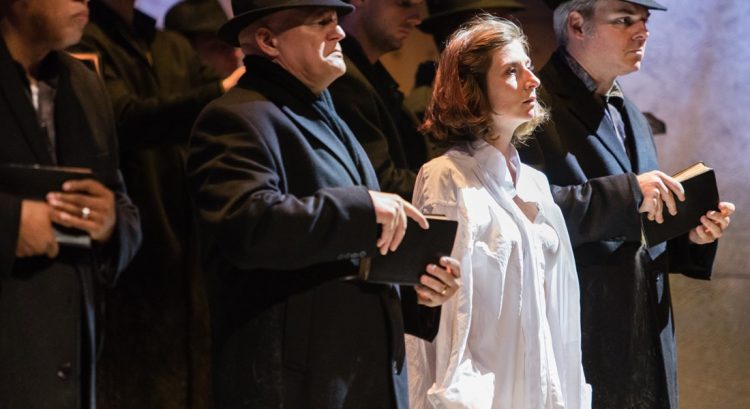 The last thing I did in the times before New York City (and subsequently, much of the country) shut down due to the pandemic, was see the new production of The Flying Dutchman at The Met. In fact, I wrote a review of it for this same illustrious podcast. In my review, dear readers, I mentioned that it was ironic that this new Flying Dutchman should immediately follow the company premiere of Handel’s Agrippina. The latter is about the eponymous title character, the fiercely independent woman who became the only female ruler of the Roman Empire.

On the other hand, The flying Dutchman centers on a woman and her obsession with a man, in spite of her merely knowing him by his portrait. She sacrifices everything for him, and in the end falls victim to the overblown operatic trope of dying for love. In this light, these two women cannot be more different. Yet, in her own way Senta is a strong woman. She believes so strongly that she can redeem The Dutchman that everything she does is geared towards that goal. This is what gives her the courage to kill herself at the end.

With this in mind, I present you with the case of Bess—the leading lady of Breaking the Waves. This opera, composed by Missy Mazzoli with a libretto by Royce Vavrek, is based on a 1996 film by Lars von Trier. In this opera, as in the film, Bess is a woman from a strict protestant sect in Scotland. Her profound faith in God and deep love for her husband guide her to sacrifice herself in an effort to cure him after he becomes paralyzed from an offshore drilling accident.

Missy Mazzoli has said in interviews that she is attracted to stories about strong lead characters, particularly women. However, audiences may need to dig deep to find that quality in Bess. She is a woman who complies with her husband’s wishes, to have a multitude of extramarital sexual encounters; with the goal of recounting them in detail to her husband, so that he can regain a means of intimacy with his wife, albeit vicariously. However, things eventually get out of hand, culminating in her death after she willingly foregoes caution and participates in a violent group sexual encounter. She does so in an ultimate sacrifice, to cure her husband’s paralysis. While her sacrifice appears to work, the reality is that Jan concurrently receives successful treatment, which allows him to regain function.

To be fair to Bess, she is initially apprehensive about following Jan’s instructions, however between her husband’s lack of empathy and the dictates of her male-dominated religion, where wives must obey their husbands, she eventually acquiesces and does her “duty”. The story has other issues as well. Most notably, the fact that one cannot spiritually heal someone of a physical disability. However, I would call Bess a strong woman. She is strong, not only in her faith, but also as a person dealing with her own, albeit undiagnosed, disability.

She suffers from auditory hallucinations which she interprets to be the voice of God. Her mental illness makes her an outcast. When she marries her husband Jan in the beginning of the opera, it appears that Jan has to take care of Bess. However, Jan’s accident causes a slight role reversal. Even though Jan still tells Bess what to do, it is Bess who ultimately decides to take responsibility for her actions and do what she thinks is best to take care of her husband. These choices are contrary to the dictates of her strict Calvinist community (particularly its male leaders), and the objections of her sister-in-law and confidant, Dodo.

Prior to writing the opera, Mazzoli took a trip to Scotland and tried to incorporate its topography into her composition. The resulting score is quite compelling. The vocal lines are incredibly lyrical, allowing for some deeply passionate duets for Bess and Jan, but the orchestration is foreboding and the melody rests on top of some incredibly dissonant harmonies. Essentially this piece is a study in contrast. The instrumental writing has the heft of an early 20th century orchestra, but somehow is able to maintain the purity and clarity of the baroque period.

Additionally, many sections in the libretto are repeated by different characters, most notably by Bess and the male chorus that dominates the work. There are very few women in the piece, only Bess, her overbearing mother and Dodo. By contrast, the chorus plays many roles, whether it be the religious leaders in Bess’s community, Jan’s fellow shipmates, Bess’s lovers or even the voices inside her head. Bess and the chorus form a symbiotic, almost parasitic relationship, where they repeat text immediately after Bess sings it, however this is far from call and response. Instead, what sounds sweet and lyrical when sung by soprano Kierra Duffy’s Bess, takes on a menacing tone when repeated by the chorus. Mazzoli’s score accomplishes this by implementing changes in rhythm, glissandos in the strings, and pungent percussive piano chords in the base. These were all deftly explored by Maestro Steven Osgood.

As Dodo Mezzo Eve Gigliotti was touching, she was the mother Bess never really had. She possessed a rich Mezzo which she put to excellent use towards the end of the opera, where she condemns the community’s religious leaders at Bess’s funeral. Gigliotti’s singing brought out the parallels between this scene and Amneris’s judgement scene, where she curses the priests at the end of Aida. As Jan and Dr.Richardson, both John Moore and David Portillo sing sweetly. Moore deployed his vocal heft when necessary to emphasize Jan’s helplessness after his accident.

The production directed by James Darrah was sparse, the set design gave the piece an industrial feel. However, the most notable facet of this production was the lighting. For the most part, it was appropriately dark, but at times the lighting lent the production the quality of film noire. Such as in the scene depicting Jan’s accident where everyone on the ship is indistinguishable except Jan who is bathed in ghostly light.

One other bit of stage direction stands out. Towards the end of Von Trier’s film, children pelt Bess with rocks, chanting “who’s a tart!”, (Tart being slang for a promiscuous woman). Here, religious elders ask Bess that same question while hitting her with bibles.

While this opera’s depiction of disability is far from perfect, it must be said, Missy Mazzolli and Royce Vavrek have given us an engrossing new work of music drama. While this piece may be problematic, it is still one of the few pieces to take an honest if misguided look at disabled sexuality. Despite its blemishes, it’s still a work that should be seen and experienced and I applaud everyone who worked on this production.