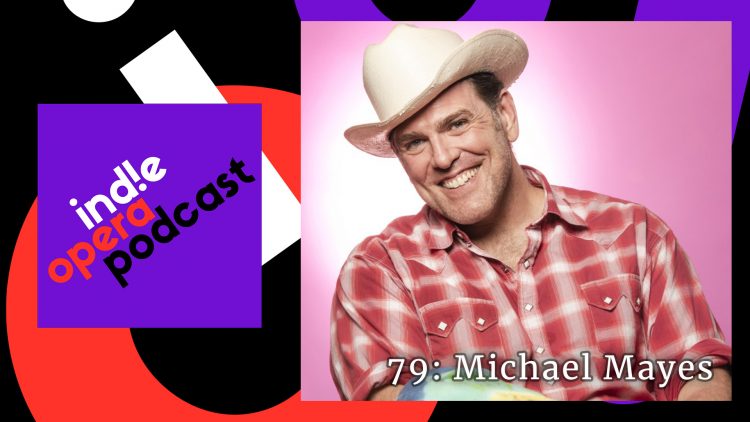 Baritone Michael Mayes joins us to to share his insights into what keeps people coming back to opera and how he gets to “The Quick”, his popular podcast. Known for his powerful performances in Dead Man Walking and other contemporary opera, he recently showed audiences a new side of himself singing and playing country guitar in Atlanta Opera’s “Crossroads” concerts. He describes the many successful initiatives Atlanta Opera has employed to thrive during Covid times, including its outdoor “Big Tent” series, its team of superstar Company Players, and streaming opera. There’s plenty of bluegrass and salty language in this hilarious episode, so we advise that you use your headphones around children and sensitive individuals!

Listen to the Audio only version here:

The co-hosts and Michael discussed how classical vocal training allows him to sing any style of music he chooses to.

Other recent roles/operas performed by Michael

Michael began and built his career on the ‘Opera Chitlin Circuit”

We discussed how the smaller opera companies found the path towards being more flexible and could adjust to the Covid pandemic better.

“The Quick” on (TDO) The Dallas Opera Network

The Marvelous World of Your Singing Hostess, Mari Lyn, a multi-episode serialized opera

Spotlight Media has paired with ATL Opera Productions to produce and present their online operas and concerts.

What’s Next for Michael?

The Sound of Music – Houston Grand Opera at TDECU Stadium

Baritone Michael Mayes enjoys a busy operatic career in both traditional and contemporary operatic roles with theaters throughout the United States and Europe. His critically acclaimed portrayal of Joseph De Rocher in Jake Heggie’s Dead Man Walking has been seen in multiple US theaters including Atlanta Opera and Washington National Opera and internationally with Teatro Real, New Israeli Opera and the Barbican in London. Mr. Mayes is known for his portrayals in other contemporary operas including Older Thompson in Glory Denied, Lawrence in The Wreckers, Adam in The Canticle of the Black Madonna, Kinesias in Mark Adamo’s Lysistrata, Edward Gaines in Margaret Garner, and most recently Daddy in Taking Up Serpents. Recent highlights include his debut with Staatsoper Stuttgart the as title role in Nixon in China, Sweeney Todd with the Bergen Philharmonic Orchestra, Rigoletto with Houston Grand Opera, Tonio in Pagliacci with Boston Lyric Opera, Thoas in Iphigénie en Tauride with Staatsoper Stuttgart, Conte di Luna in Il trovatore with Seattle Opera, Doug in Everest with Lyric Opera of Kansas City, Starbuck in Moby Dick and Sharpless in Madama Butterfly with Pittsburgh Opera, Alfio/Tonio in Cavalleria rusticana/Pagliacci with Madison Opera, and Wozzeck with Des Moines Metro Opera.