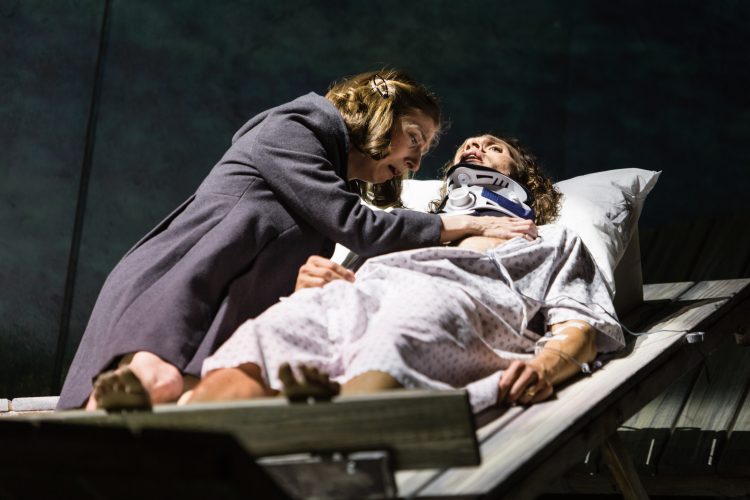 It feels silly to say this, as we mark a year since COVID-19 came to the US, but the pandemic ruined my plans. You see, June 2020 was to be The Met’s company premiere of Breaking the Waves in a coproduction with BAM. The opera—with music by Missy Mazzoli and text by Royce Vavrek—which had its premiere at Opera Philadelphia in 2016,is one of only a handful of operas centered on a character with a physical disability. And it is the only one to examine disabled sexuality. Needless to say, as a disabled musicologist, I was first in line for a ticket to this production. Yet, dear readers, you may be surprised to learn that when the run was canceled, part of me breathed a sigh of relief. Yes, Breaking the Waves is a groundbreaking piece for the reasons mentioned above. But its portrayal of disabled sexuality is unsettling. But that is not even the worst part.

For those who do not know, Breaking the Waves is based on the 1996 film by Lars von Trier. In it, Bess, a member of a Calvinist community in Scotland, is married to Jan: a Norwegian immigrant who works on an oil rig. Shortly after their wedding, Jan returns to the oil rig where he sustains a spinal cord injury in a drilling accident, leaving him paralyzed.

Consequently, this forces Bess and Jan to rethink their sex life. And that is exactly where my problems with this opera begin. Jan comes up with the idea for Bess to pursue copious extramarital sexual relationships, and recount them to him in graphic detail. Any sane person would immediately recognize the dangers posed to Bess by Jan’s lack of care or planning, or sufficient concern for his wife’s wellbeing. However, the real problem arises when Jan starts to heal—due to his medical treatment—which simultaneously occurs during Bess’s sexual odyssey, more than implying a sense of correlation between the two.

The opera culminates in Bess sacrificing herself, dying from injuries sustained during a violent group sexual encounter that she willingly undergoes—knowing the dangers, but believing that her sacrifice will cure Jan. Although in the end Jan is cured by surgery, the opera makes it seem like Bess’s actions elicit a miracle.

As a person with a disability, I am no stranger to well meaning individuals who hope and pray for miracles to cure me. No such thing exists. However, when LA Opera and Opera Philadelphia announced a coproduction of Breaking the Waves, streaming online March 19th-April 12th, I began to consider miracles as a narrative device in operas involving characters with a physical disability. What follows is a survey of such works.

It is funny to consider how many operas are tangentially about Jesus, yet never actually portray him. Richard Wagner wrote an entire opera about the Holy Grail, with a 90-minute communion at the end of the first act. And yet, Jesus never once appears. Gian Carlo Menotti’s Amahl and the Night Visitors faithfully upholds this tradition. Non-opera lovers may know it as the 40-minute Christmas-time opera, typically presented for families to introduce their children to the theater. Naturally, because it is written for Christmas, the baby Jesus plays a substantial off-stage role, culminating in a miracle—because that is just his thing. In this case the miracle involves the healing of a poor disabled boy, who is visited by the magi on their way to Bethlehem.

The three kings spend the night in the hobble of Amahl and his impoverished mother. When confronted with the opulence of the visitors, Amahl’s mother attempts to steal from her royal guests, to save her son the humiliation of begging. However, she is caught in the act. Amahl comes to the defense of his well-meaning if misguided mother, moving the kings to sympathy towards their plight. The kings permit Amahl’s mother to keep their stolen gold, citing that Earthly riches will not be needed in the kingdom of The Messiah. Their generosity prompts Amahl’s mother to return the gold, and Amahl to offer his crutch (as he has nothing else to offer) as a gift for the infant Jesus. It is this selfless gesture that brings about the long-distance miracle, healing Amahl of his disability.

This is an example of the intricate balancing act performed when depicting disabled characters on stage. In general, this is an acceptable use of a miracle cure, because the opera is about Jesus and Christmastime. However, this still makes me uncomfortable. To begin with, Amahl is a victim of inspiration porn: the act of praising disabled people for mundane tasks and branding it as bravery. Even before the miraculous ending, Amahl is a happy go lucky disabled boy, not unlike Tiny Tim. When faced with his mother’s concerns about becoming beggars, he tries to assuage her fears by saying how fun it will be—that they can dress in costume, he knows lots of catchy songs people can dance to, etc. This all smacks of Tiny Tim’s immortal phrase, “God bless us everyone!”

Finally, in the ending itself, there is an implicit quid pro quo: Amahl is only healed when he offers his crutch, and in a sense converts to Christianity. If I had a penny for every time I was told that prayer and devotion to Jesus would make me walk, I could probably afford surgery to do so (but just so we’re clear, that surgery does not exist).

But what about operas not tied to holidays? Ones that feature adults with disabilities. Breaking the Waves is one such example. The opera has had both popular and critical success. It is one I really had high hopes for, but I was shocked by how badly It missed the mark.

Bess becomes a Christ figure through her sacrifice in exchange for her husband’s miraculous healing. I can sympathize on a level with Jan’s position. Having a disability poses an immense difficulty when entering romantic relationships, especially where intimacy is concerned. However, Jan forces his wife into situations that are incredibly unsafe and questionably consensual. What is worse is the miraculous ending that gives Jan an outlet no truly disabled human-being has. No amount of physical sacrifice will make your disability magically go away. Furthermore, it turns Bess into a Christ figure, but Jesus himself is not involved, and the audience is left wondering whether Jan is deserving of his wife’s sacrifice and its accompanying miracle-cure.

Conversely, miracles as a narrative device can be executed properly. I give you the case of Iolanta, Tchaikovsky’s final opera: a one act fairytale. This opera tells the story of Iolanta—a blind princess who is installed by her father in a pleasure garden. Her ladies in waiting are instructed to ensure that the princess wants for nothing, because the king is terrified that she might find out that she is blind. The scary thing is that it works so well that the princess believes that eyes exist solely to release tears when crying. However, one day she meets a knight and falls instantly in love. The princess learns of her impairmentfrom her suitor. The knight then gives her the courage to submit to a ritual led by a monk, who will pray to have her sight restored. The ritual is, however, contingent on her faith in the process. Furthermore, she must stand up to her father, and advocate for her desire to go through with the ordeal.

Ultimately, she is cured, and she begins a new life with the man she loves. Because Iolanta is a fairytale, everything about it takes on an allegorical tone. Therefore, the miracle is symbolic. Musicologists argue that it symbolizes a sexual awakening. However, I would argue that the miracle illustrates Iolanta’s first steps in coming to terms with her disability. This puts it in strong opposition to Breaking the Waves, which inserts a miracle into a hyper realistic scenario.

At the beginning of the opera, Iolanta is in a state of blissful ignorance. Yet, when she is given the opportunity to have a loving relationship—something that everyone should have the chance to experience—she must confront her disability. Here, we see a crucial element of the disabled experience. As you get older, needs and wants change, and one’s relationship to their disability must change to accommodate that. This is a scary process. And many times, structures need to be broken down and rebuilt. And unfortunately, there is never a true point of stability. But with courage and a few good people in your corner, it is scary but not impossible.

What can we learn from all of this? Miracles do exist in the lives of people with disabilities. However, it is not in the way most able-bodied people may think. At times it is a challenging experience, yet ultimately it is a rewarding one; and not one that can or should be prayed away. The true miracle is learning how to live with a disability and thrive with it.