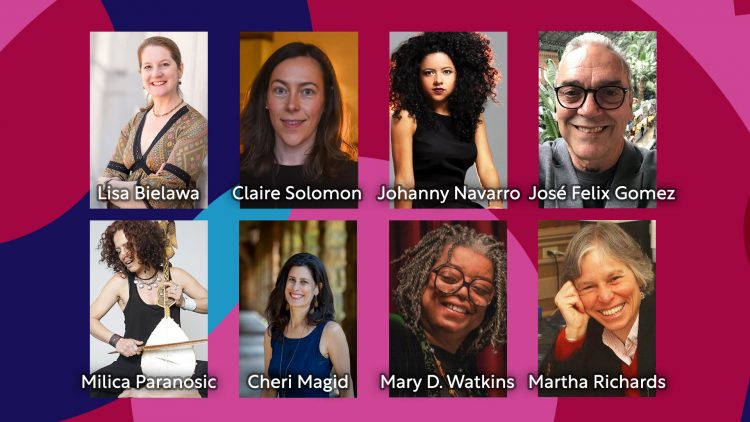 The Indie Opera Podcast is releasing an episode which was recorded in the Spring of 2020 that got derailed during the start of the pandemic, and features all the composer/librettist teams to receive the 2020 OPERA America Discovery Grants which support composers who identify as women in the development of new operatic works and the advancement of their careers in the opera industry.

We are joined by composers Lisa Bielawa, Mary D. Watkins, Milica Paranosic, Johanny Novarro; librettists Claire Solomon, Cheri Magid, and Jose Felix Gomez; and producer Martha Richards. There are lots of music and video highlights in this long-delayed episode, and we include updates on all the projects that they have been creating since the start of the pandemic.

CENTURIES IN THE HOURS:

What was the impetus and genesis of this new work?

Song Cycle transforms into and Opera:

Redempcion, 2nd opera by Johanny & Jose still to be produced.

¿Y los Pasteles? (Where are the Pasteles?) is their third opera, and the project that received the Discovery Grant funding.

Penelope and the Geese:

What’s up with and where are our Artists during this Covid-19 shutdown?

is a Rome Prize winner in Musical Composition, the recipient of the 2017 Music Award from the American Academy of Arts & Letters and was named a William Randolph Hearst Visiting Artist Fellow at the American Antiquarian Society for 2018. Kulturprojekte Berlin recently premiered her work Mauer Broadcast, a series of pop-up choral performances for the 30th anniversary of the fall of the Berlin Wall. Her music has also been premiered at the NY PHIL BIENNIAL, Lincoln Center, Carnegie Hall, The Kennedy Center, SHIFT Festival, and Naumburg Orchestral Concerts. She began touring as the vocalist with the Philip Glass Ensemble in 1992. In 2019, she became the inaugural Composer-in-Residence/ Chief Curator of the Philip Glass Institute at The New School. She received a 2018 Los Angeles Area Emmy nomination for her made-for-TV-and-online opera Vireo: The Spiritual Biography of a Witch’s Accuser, created with librettist Erik Ehn and director Charles Otte. Bielawa is currently at work on her expanded opera version of Centuries in the Hours as well as Broadcast from Home, a new large-scale interactive work in response to the coronavirus crisis. Broadcast from Home combines short compositions by her with performance submissions from the public, as well as their written testimonies about the current experience of living in isolation.

is a writer, translator, and professor of Latin American and comparative literature. She is the author of Fictions of the Bad Life, a book about literary prostitutes, and short fiction and essays about avant-garde theater, anarcho-feminism, Manic Pixie Dream Girls, translation theory and new music.

Solomon’s fiction blurs the line between historical and speculative, pop and avant-garde, to create darkly comic works that are both futuristic and steeped in the past. As a critic, she is known for a multidisciplinary approach to narrative, theater and music, which centers “minor” works by historically marginalized writers.

She speaks several languages, and has translated the work of Roberto Arlt, Lidia Falcón and Juan Goytisolo. She is currently writing a novel about higher education. She is also a classical pianist.

The Puerto Rican female composer, Johanny Navarro have been commissioned, and performed by leading ensembles and soloists, including Elisa Torres, Luis Miguel Rojas, The Catholic University of America Symphony Orchestra, American Harp Society, Inc., and Coralia from the Puerto Rico University. Her piece Celebration for piano trio (2016) was selected by The Arts Club of Washington DC has the music work for the commemoration of its 100th anniversary.

Navarro’s Videntes Stellam for chorus and orchestra (2016) was premiered at the National Shrine of the Immaculate Conception in Washington D.C. With this majestic and colorful work, the composer made her debut with the Symphony Orchestra of Puerto Rico, conducted by Maestro Roselín Pabón at the José Miguel Aglerot Coliseum. Her first chamber opera, Frenesí (2017), was premiered in Washington D.C. and later in her country, Puerto Rico, produced by the composer. In the summer of 2019, Navarro was chosen to be part of the Puccini International Opera Composition Course in Luca, Italy; mentored by the maestro, composer, and director Giralomo Deraco.

The afro-Caribbean influence are Navarro’s cultural inspiration and are especially present in her musical aesthetic. Her music has been performed in Puerto Rico, Cuba, Mexico, United States, France, Italy, and Spain. http://www.johannynavarro.com/

Milica earned her Master’s Degree in composition from The Juilliard School where she was a music faculty for over 20 years; a positions she has recently  order to dedicate her time to writing, teaching and producing, and to running her Harlem-based non-profit for music and multimedia, Paracademia Center, Inc. https://www.milicaparanosic.com/

The opera Penelope and the Geese, for which she wrote the libretto and Milica Paranosic composed the music, will have a workshop production August 2020 co-produced by ShoutOut Saugerties and 11 Jane Street Gallery in Saugerties, NY and will have two concert performances in Mexico City in October at the historic Anfiteatro Simón Bolívar. Cheri’s plays have been seen at Primary Stages, New Georges, The New Group, The Women’s Project, Rattlestick and South Coast Rep, among others.   She was the inaugural Susan P. Stroman Playwright at University of Delaware and the Tennessee Williams Playwright at Sewanee, where she also had a two-summer residency for Penelope and the Geese. She is a member of Dorset Theatre Festival’s Women Artists Writing group, was a 2014 Audrey Resident at New Georges, and a 2014 Walter E Dakin Fellow at the Sewanee Writers’ Conference. Cheri has been commissioned by Cincinnati Playhouse, South Coast Rep, The Keen Company, and the Southern Foodways Alliance. Cheri is writing a podcast for Pretty Matches, Sarah Jessica Parker’s company.  She wrote for the Emmy-award-winning television show Arthur and is an Assistant Arts Professor of Dramatic Writing at NYU Tisch.

is a composer, arranger, performer, and recording artist based in Oakland, California.  She has composed three operas on historical themes – Dark River: The Fannie Lou Hamer Story (about civil rights activist Fannie Lou Hamer), Emmett Till: The Opera (about the 1955 murder of Emmett Till), and Queen Clara (about Clara Barton, founder of the American Red Cross). Trained in classical music at Howard University, her music is a passionate mixture of classical, jazz, gospel, and blues influences.  Her opera about Fannie Lou Hamer was staged by Oakland Opera Theater in California in 2009 and by the Mount Holyoke Symphony Orchestra in Massachusetts in 2014. Concert versions have been performed in Atlanta and Washington, D.C.  There are plans for a New York production of Emmett Till: The Opera at John Jay College this year.

Watkins has released four albums of her own compositions, and she has been featured on many others as a composer, arranger, and performer. She has written music for individual singers, theatrical productions, films, instrumental ensembles, and symphony orchestras. In the Bay Area, she is especially well-known for her jazz adaptation of The Nutcracker Suite, which was performed annually by San Francisco’s Dance Brigade for many years. https://marydwatkins.com/

Richards has been frequently recognized for her commitment to women and to the arts. In April 2006 she was one of three U.S. nominees (with Quincy Jones and Wynton Marsalis) for the prestigious international Montblanc De La Culture Award for outstanding service to the arts. In April 2009 she was inducted into the BayPath College 21st Century Women Business Leaders Hall of Fame for her work in philanthropy. She has been honored as one of three “founding mothers” of the Women’s Fund of Western Massachusetts.  In 2018 StateraArts created an  award in her honor, the Martha Richards Visionary Woman in Leadership Award, which is given annually to a visionary woman who uplifts, amplifies, and advances women in the arts.