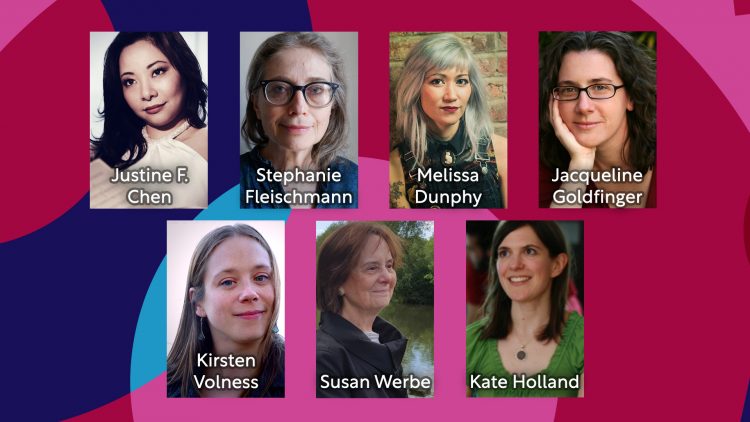 The Indie Opera Podcast is releasing part two of an episode that was recorded in the Spring of 2020 that got derailed during the start of the pandemic and features all the composer/librettist teams to receive the 2020 OPERA America Discovery Grants which support composers who identify as women in the development of new operatic works and the advancement of their careers in the opera industry.

Peter, Brooke, and Walker welcome the three remaining composers with their librettists and play video samples of their operas with musicologist Greg Moomjy’s music notes.

Justine Chen, composer, and Stephanie Fleischman, librettist, talk about delving into Justine’s multifaceted Taiwanese family history for Seven Sisters, which follows the form of a formal Taiwanese funeral. Melissa Dunphy and Jacqueline Goldfinger, composer and librettist, share the macabre origin of Alice Tierney: an unsolved 1880 murder in Philadelphia on Melissa’s property, and discuss the novel way they are choosing to tell the story. Kirsten Volness, Susan Werbe, and Kate Holland, composer and librettists of Letters That You Will Not Get: Women’s Voices from the Great War, discuss the work’s fascinating journey from song cycle to opera, and how they set to music the real-life accounts of multiple women on all sides of the conflict who lived through World War I.

CLIP 1: Love Duet for Alan & Christopher from The Life and Death(s) of Alan Turing

Greg Moomjy Note about the Score

The OPERA America Discovery Grant is the first grant that Melissa Dunphy has ever won.

Genesis of the opera

LETTERS THAT YOU WILL NOT GET – Women’s Voices from the Great War:

Creating the story arc and characters:

Greg Moomjy Note about the Score

What’s up with and where are our Artists during this Covid-19 shutdown?

Her first opera, The Maiden Tower, was presented at Juilliard, NYCO’s VOX 2006 Showcase, and by Chants Libres. Her opera Jeanne, featured in VOX 2008, was described as “lyrical, atmospheric… striking… Throughout, Ms. Chen balances despair and humor.” (NYTimes)

She is working on a full-length opera commissioned by American Lyric Theater on the life of computer-scientist Alan Turing, an evening-length choral work for The Crossing, and a chamber opera with Stephanie Fleischmann.  Recent honors and activities include grants from the Jerome Fund for New Music, Frances Goelet Charitable Lead Trust, and Opera America.  She has been featured on WNYC’s Studio 360, and WBAI.

She received her DMA in composition from Juilliard, where she also earned her Bachelors and Masters in violin and composition.  Passionate about education, Chen created the curriculum and heads the music department at Pierrepont School in Connecticut.

is a librettist and playwright whose texts serve as blueprints for intricate three-dimensional sonic and visual worlds. Her “lyrical monologues” (New York Times), “smart” opera libretti (Opera News), plays, and music-theater works have been performed internationally and across the United States.

is a composer who specializes in political, vocal, and theatrical music. She first came to national attention when her large-scale work the Gonzales Cantata was featured in The Wall Street Journal, The Atlantic, National Review, Fox News, and on The Rachel Maddow Show, and was staged by American Opera Theater in a sold-out run. Other notable works include the song cycle “Tesla’s Pigeon,” which won first place in the NATS Art Song Composition Award, and choral work “What do you think I fought for at Omaha Beach?” which won the Simon Carrington Chamber Singers Competition and has been performed by ensembles including Chanticleer and Cantus. Dunphy has been composer-in-residence for the Immaculata Symphony Orchestra, Volti, and the St. Louis Chamber Chorus. In addition to her concert and choral music, she is a Barrymore Award-nominated theater composer and sound designer and is Director of Music Composition for the O’Neill National Puppetry Conference. Dunphy has a Ph.D. in composition from the University of Pennsylvania and a B.M. from West Chester University. www.melissadunphy.com

is an electro/acoustic composer and pianist whose music is inspired by nature, myth, science, spirituality, and environmental and sociopolitical issues. She has received commissions from BMI Foundation, ASCAP/SEAMUS, World Future Council Foundation, and Third Practice Electroacoustic Festival, writing new works for Hotel Elefant, NOW Ensemble, Transient Canvas, Ann Arbor Symphony, and Experiential Orchestra. She performs with NYC-based Hotel Elefant and Providence-based Verdant Vibes, a new music ensemble and concert series she co-founded in 2015. Recipient of the MacColl Johnson and RISCA Fellowships in Music Composition, Kirsten was 2017 composer-in-residence at the Music Mansion creating the First Fridays concert series, and served on the board of directors as Secretary. She collaborates with Meridian Project on multimedia performances exploring astrophysics, writes and performs operas with homeless advocacy group Tenderloin Opera Company, and is an affiliate artist of Sleeping Weazel theatre company. Her first opera Letters That You Will Not Get: Women’s Voices From The Great War is in development with The American Opera Project with support from a 2020 OPERA America Discovery Grant. She taught privately and at the University of Rhode Island before joining the faculty at Reed College as Visiting Assistant Professor of Music.

is an independent scholar who focuses on the social and cultural history of WWI, working with artists to create performance pieces that highlight individuals’ responses to the war, using original writings from men and women from both sides of the conflict. Susan commissioned a dance piece based on a war poem, performed at a Boston arts festival. She was creator, executive producer and dramaturg for The Great War Theatre Project: Messengers of a Bitter Truth, performed in the USA and UK. She has served as presenter or panelist at WWI conferences at the National World War I Museum, USA, and the University of Kent, UK; and a conference on War, Literature & the Art, USAF Academy. She was a panelist on Visual Memory in a Time of Endless War,  companion to an art installation Paul Emmanuel: Remnants, hosted by Boston University.  She holds a BA in English Literature from New York University and a Master’s in Education from the University of Massachusetts.

trained in London as an actor and director at the Webber Douglas Academy of Dramatic Art. She has performed in New York, regional theatre, and international arts festivals. Directing credits include: Little Wing as part of a Field Artist Residency, Cloud 9 at the Drayton Theatre in London, Henry VI Part 1 at the Fall Festival of Shakespeare, Bongani in FringeNYC 2011, and the solo show The Actual Dance starring Sam Simon. Kate has produced and directed June and Nancy in FringeNYC 2012, and Clear Cold Place and A Bright Room Called Day with Vilde Chaya Collective. Kate co-wrote No Provenance, a new play about love, loss and art, with longtime collaborator and award-winning playwright Caroline Prugh, which was presented at FringeNYC 2014. Kate co-wrote the script for and directed the short film No Monsters in Berlin which featured Berlin-based Syrian refugees as members of the cast and crew.  The film was awarded the Jury Prize at the Diversity in Cannes Short Film Showcase as well as the Best Short Film at the 2017 New York Short Film Festival.  Kate is currently working on the script for a feature-length version of No Monsters. In December 2018, Kate directed the premiere performance of Letters That You Will Not Get: Women’s Voices from the Great War.