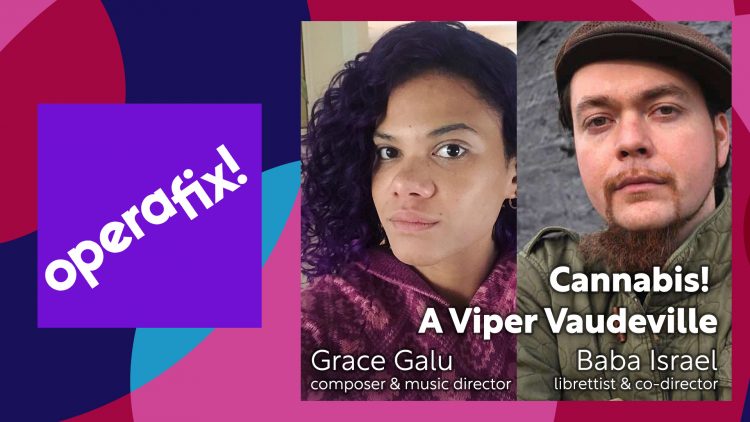 (Cannabis originally planned to open its run during HERE and BMP’s PROTOTYPE Festival on January 7, 2022. Due to COVID, the 2022 Festival and all performances of Cannabis were postponed.)

A theatrical concert exploring the history of cannabis using music, dance, and spoken word grounded in the Hip Hop tradition of the remix and mashup.  Inspired by Martin A. Lee’s book Smoke Signals: A Social History of Marijuana, CANNABIS! A VIPER VAUDEVILLE weaves the music of icons such as Louis Armstrong and Bob Marley with the stories of grassroots activists Dennis Perron and Brownie Mary with personal narratives. From Congo Square to the speakeasies of the jazz age, from the revolutionary happenings of the ’60s to the AIDS activism of the San Francisco buyers club, our time traveling tale invokes a tradition of rebel spaces — sites of music, healing, and resistance.

In collaboration with Soul Inscribed, a hip hop and spoken word collective and an ensemble of dancers that includes members of the revolutionary Urban Bush Women.

BIO: Grace Galu (Composer, Performer) is a vocalist, actor, guitarist and composer. She combines the sounds of her Irish and Congolese heritage and her LES upbringing in a soulful and gritty twist.. Grace was featured in Buskerball, and recorded “Firelight” with Fearless Music. Her composition, “Ordinary Sentiment” was featured in the Ed Burns film, “Purple Violets” which premiered at the Tribeca Film Festival. Grace devised The Mendelssohn Electric with Trusty Sidekick, and was cast as the lead in their production, The Gospel Electric, commissioned by the Park Avenue Armory. She is a core member of the band Soul Inscribed, and was twice selected as a cultural ambassador for the American Music Abroad program. She has been selected as a cultural ambassador for their next residency program (2022). Grace is also a recipient of the NEFA NTP grant. Soul Inscribed has recently been signed to the music label, Tokyo Dawn and just released their EP, Tune UP. Grace is an artist in residence at HERE Arts Center and the composer for Cannabis! A Viper Vaudeville. Grace voiced Wisdom in Nia Witherspoon’s production, The Dark Girl Chronicles (2021 at The Shed).

BIO: Baba Israel (Creator, Writer, Performer) is an artist, producer, educator, and consultant raised in New York by parents who were core members of the Living Theatre. He was Artistic Director of Contact Theatre in Manchester where he developed several festivals and productions. He was a resident artist at BRIC creating his latest multimedia performance The Spinning Wheel in collaboration with London-based company Unfinished Business. He is a core member of Hip Hop/Soul project Soul Inscribed, which recently completed the American Music Abroad program. He holds an MFA in Interdisciplinary Arts from Goddard College and is the Co-Artistic Director of the Performance Project based at the University Settlement. He is a proud member of HERE’s HARP program and is developing his current production, Cannabis! A Viper Vaudeville.