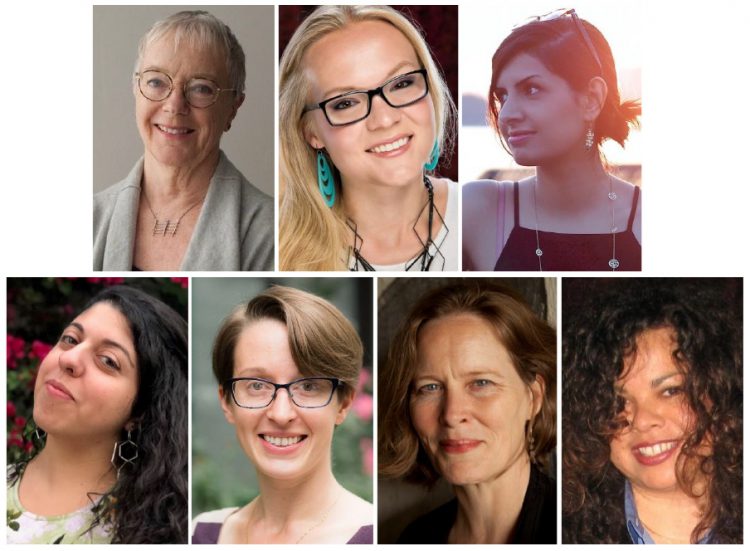 Excerpt: I Dream of a City

A brief synopsis of the opera:

In the wake of their devastating defeat, the widowed women of Troy wait on the beach below the ravaged city to be claimed by their Greek conquerors as slaves and concubines. Though the war is over, exile and degradation lie ahead; the fates of these women – including Queen Hecuba, her mad daughter Cassandra, and her daughter-in-law Andromache – still hang in the balance. Originally written in response to the Bosnian War in 1995, this new opera adaptation of Euripides’ Greek tragedy resonates with today’s refugee crisis.

Sarah Taylor Ellis writes music that empowers female voices and blurs the boundaries among music theater, art song and opera. In addition to The Trojan Women, Ellis is the composer of These Girls Have Demons (in development with Pittsburgh CLO) and a steampunk Regency adaptation of Jane Austen’s Emma. She is senior lecturer in musical theater at the University of Chester, and she holds a Ph.D. in theater and performance studies from UCLA.

This is the interlude from Seamstress, a documentary and multimedia opera based on the collected oral histories of Palestinian women and girls. It is placed between two of the oral histories, which are both presented in song-form.

Donia Jarrar is an Arab and Muslim-American composer, pianist, and interdisciplinary artist. Born to a Palestinian father and an Egyptian mother, she grew up between Kuwait City, Alexandria, Ramallah, and New York. Her personal experiences have strongly shaped her compositional voice, leading her to explore themes of intergenerational memory, trauma, identity, exile, displacement, and cultural narrative in her work.

Jarrar was recently awarded the 2019 Discovery Grant for Female Composers from the National Opera Center of America for her work Seamstress, a documentary multimedia opera based on oral history interviews conducted with Palestinian women and girls from her community. She has been commissioned by the Doris Duke Foundation for Islamic Art and is a featured musician on the Emmy-award winning series Arab American Stories.

She holds a Doctor of Musical Arts degree from the University of Michigan.

No recordings available yet

Libretto for the opera by Joan Schirle. This chamber opera is based on the correspondence of America painter, Morris Graves (1910-2001). A workshop production is projected for 2020 in Blue Lake, California, at Dell’Arte International, a theater company and regional art center.

The opera is scored for 4 singers, 2 speaking roles and a chamber orchestra of 7 multi-instrumentalists, including piano, strings, reeds, percussion, glass armonica and sampler.

Very loosely based on Calderon de la Barca’s La Vida Es Un Sueño, it tells the story of the coming-of-age of a young girl. On the eve of her 18th birthday, Rosaura has a series of 18 dreams in which she comes to terms with the loss of her family, all of whom are dead. In this dream, she brings to life her unborn twin, Segismundo.

Gina Leishman, composer and multi-instrumentalist, is musically at home in many worlds, including jazz, circus and classical. Born in the U.K., she has made her home in New York since a994, writing for theater, opera, TV, film, concert stages and downtown venues. her ensembels include Kamikaze Ground Crew, dedicated to original composition: Mr. Wau-Wa, dedicated to the songs of Bertolt Brecht: and various quartets dedicated to the Leishman Songbook. Her previous operas include: Vagabond, Actaeon and Burning Dreams.

Author of the book on which the opera is based, Sor Juana’s Second Dream.

The book and libretto, like the opera, is a work of historical fiction, chronicling the life, poetry and secrets of 17th century Mexican nun, genius poet and protofeminist, Sor Juana Inés de la Cruz. Sor Juana’s work has withstood the test of time, solidifying her as one of the first great poets of the Americas and a potent Latin American feminist icon. Her secrets are revealed in her correspondence with La Condesa de Paredes, the wife of the reigning Spanish Viceroy of New Spain (Mexico).

The opera is currently being orchestrated by Carla Lucero for a modified Mexican Baroque chamber ensemble, featuring ocarina, recorder, indigenous percussion, Spanish vihuela, guitar, harpsichord and strings.  The opera will premiere in November 2019, with stage direction by Peter Kazaras, the Director of Opera UCLA in UCLA’s Herb Alpert School of Music, and with music direction by Mary Chun.

The first aria is sung by the character, La Condesa de Parades, the Vicereine of New Spain (Mexico). It is a song of fear and yearning, as she receives notice that the tenure of her husband’s reign as Viceroy has been cut short. She has fallen deeply in love with (Sor) Juana, and fears that Juana’s work will be destroyed by the Church without her protection. She pleads with Juana to make copies of her work so that she can publish it in Spain. She wonders how they will survive without each other.

The second aria (with chorus) is sung by El Alma, who is the soul of Sor Juana. El Alma is an androgynous spectre who foretells coming events, much like a Greek chorus, through Sor Juana’s own poetry and Plato’s Symposium. In this aria, which precedes Sor Juana’s trial before the Inquisition, El Alma sings of the perils of those who seek recognition, fame and infamy.

Carla Lucero is originally from Los Angeles. Her mother is Indian, and her father, New Mexican. She studied composition at CalArts.
After working in Hollywood as a film composer, her love for opera and counterculture drew her to San Francisco, where Wuornos, her first opera, premiered. Her second opera, Juana, will premiere in November 2019 at UCLA.

Lucero’s third opera (in development), touch, is about American icon, Helen Keller. Scenes from touch were performed by West Edge Opera in 2017. In 2015, Castillo Interior, about Spanish nun and mystic, Santa Teresa de Avila, was commissioned by chamber ensemble, Earplay.

Carla Lucero lives in Napa and is the US Director of ComuArte International.

Based on a poignant Japanese folktale, this chamber opera tells the story of a man’s kindness to an injured crane, who then returns to him in the form of a woman and becomes his wife. She brings him a magical secret gift at the expense of her well-being. But, the gift is requested one time too many, and her secret is ultimately betrayed. Large ethical questions are woven into this simple yet multilayered story. When her true identity is revealed, the crane-wife departs – a tragic ending or a liberation?

The Trials of Patricia Isasa.

An opera by Kristin Norderval, libretto by Naomi Wallace

It premiered in Montreal at the Monument National Theater, May 2016.

The opera is based on the life story of the Argentine architect and human rights activist Patricia Isasa. In 1976 Patricia Isasa — then a high school student, and just 16 years old — was abducted, imprisoned and tortured by the military junta that ruled Argentina from 1976 to 1983. Isasa was one of as many as 30,000 citizens who were “disappeared” in Argentina, often for activities such as belonging to a union, working with the poor or voicing opposition to economic and political policies. Very few survived.

Patricia Isasa was held for 2 years but never charged with any crime. After her release, Isasa felt compelled to find out who had been responsible for her abduction, torture and detention in a secret prison. 33 years after her abduction she managed to identify and bring her torturers to justice. In December 2009 six of Isasa’s torturers were sentenced to 19-23 years behind bars. Those convicted included a federal judge, a chief of police and the mayor of her hometown.
Based on personal conversations held with Patricia Isasa in 2010, the opera raises question about the amnesty given to highly placed people in government, the use of torture for political reasons, and the need to act with urgency.

Adult Patricia sings this aria before she is about to testify in court about her experiences of being tortured and raped in prison during the dictatorship. She has finally decided to testify despite the costs and the dangers to herself, but she also reminisces about her love affair with the woman who kept her alive in prison. She remarks that everyone wants to hear about torture, but no-one asks about love.

Kristin Nordeval is a composer and singer who specializes in developing new works for voice, cross-disciplinary works and works using interactive technology. Her opera The Trials of Patricia Isasa was premired at the Monument-National theater in montreal in 2016 and won Quebec’s Opus Prize in two categories: best production in Montreal and best contemporary music. The New Yorker’s Alex Ross listed her solo CD, Aural Histories, on his “Ten Notable Classical Music Recordings of 2012.”

We the Innumerable, Libretto by Lisa Flanagan

Excerpt: An Aria from the first scene of We the Innumerable

We the Innumerable: After the 2009 presidential election in Tehran, Iran, Roya and her husband,Siavash, become targets of the state for participating in nationwide protests against the election result. Siavash is murdered, and Roya is imprisoned and put under extreme pressure to record a confessional stating that her husband was a Revolutionary Guard force who was killed by the enemies of the state. The opera is the heroic journey of an Iranian woman who protects the truth in the face of fear and violence.

Described as “stark” by WNPR and a winner of 2nd Hildegard competition, Niloufar Nourbakhsh’s music has been commissioned and performed by Symphony Number One, I-Park Foundation, PUBLIQuartet, Women Composers Festival of Hartford, Cassatt Quartet, Forward Music Project and others at numerous festivals. One of the founders and co-director of Iranian Female Composers Association, Nilou is a strong advocate of music education. she is currently a Teaching Artist Associate for composition students of NY Philharmonic Young Composers program and teaches piano at Brooklyn Music School, while finishing her doctorate at Stony Brook University.

Duel, a duet or The Girlfriend, a quartet

The opera examines issues of gender bias through the journey of one ambitious female video game designer who decides to take matters of sexist gaming industry into her own hands. A multi-media production, Mirror Game incorporates electroacoustic music, projections and choreography for a rich sensory experience that combines reality with the imaginative virtual reality of video games.

One is “The Girlfriend” – a cute piece I did for a workshop – a sort of prototype scene.

Video game designer Cybil and her best friend, Tony start a gaming company with fellow designers Olivia and Melody. Fed up with the portrayal of women in video games and the ways in which female gamers are often sidelined and bullied, they brainstorm to develop a groundbreaking idea to turn old sexist tropes on their heads. As the team throws out ideas, they sideline Tony, distrustful of the male lens. However, Cybil soon sees the need for a male ally in this fight. Together they invent a game more appealing to a broader audience that will make a more substantive impact on the culture.
Music Track credits:

Celebrated for her music’s charm and wit, Celka Ojakangas (b. 1992) is an award-winning Los Angeles-based composer who is unafraid to compose music that is both accessible and “out of the box.” Her compositions have been performed and commissioned by many artists including USC Thornton’s Wind Ensemble, yMusic, and the Portland State University Opera. Celka is the winner of USC’s 2017 New Music for Wind Ensemble Contest, the honorable mention recipient of IAWM’s 2018 Alex Shapiro prize, a finalist for the American Prize’s 2018 search for new music for wind band and a finalist for the Morton Gould Young Composer’s Award in the years 2016-2019. Celka is presently pursuing her doctorate at the University of Southern California, studying under Ted Hearne.