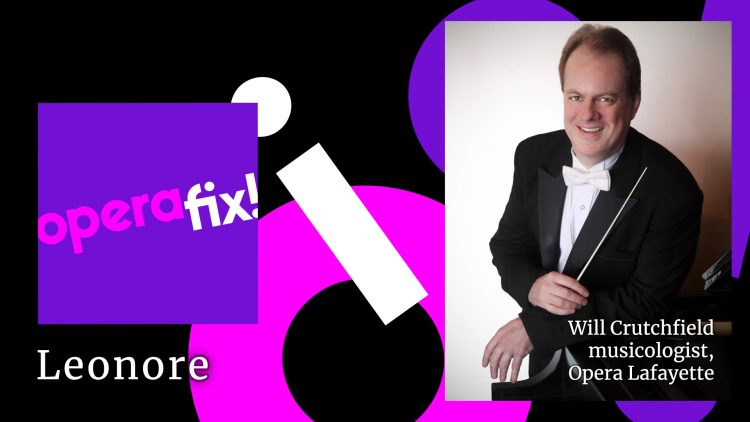 Musicologist Will Crutchfield discusses his path towards re-imagining the lost section of
Florestan’s Act Three aria from Beethoven’s 1805 version of Leonore.

The centerpiece of Opera Lafayette’s 25th-anniversary season is Beethoven’s Leonore (1805), the composer’s first version of his opera Fidelio. The company’s first opera sung in German and its largest production to date, these performances are the culmination of Opera Lafayette’s Leonore Project, which aims to recapture the origins of this touchstone of the operatic canon.

The story of bravery and injustice speaks to us today. A wife disguised as a man seeks to rescue her husband, wrongfully imprisoned and awaiting his death.This season’s production of the Beethoven’s Leonore follows the company’s 2017 modern premiere of Gaveaux and Bouilley’s Léonore, ou L’Amour conjugal (1798), which was released earlier this year on DVD on the Naxos label.

BUY TICKETS for 3/2 and 3/4 at Kaye Playhouse at Hunter College, NYC

WILL CRUTCHFIELD BIO:
Will Crutchfield (born 1957) is an American conductor, musicologist, and vocal coach. He is the founding Artistic and General Director of Teatro Nuovo, a company that presented its inaugural season in the summer of 2018 at State University of New York at Purchase. The new company continues the work that Crutchfield began as the Director of Opera for Bel Canto at Caramoor International Music Festival, a widely-heralded program which celebrated its twentieth and final season in 2017.

As Director of Opera for the Caramoor International Music Festival from 1997 to 2017, he has conducted over 30 titles by Rossini, Donizetti, Bellini and Verdi with the Orchestra of St. Luke’s and various Internationally renowned soloists.

A specialist in the bel canto repertoire, he prepared the first performing edition of Donizetti’s Élisabeth ou la fille de l’exilé and conducted its world premiere at the Caramoor Festival on July 17, 2003. Crutchfield conducted Rossini’s Ciro in Babilonia at the 2012 Rossini Opera Festival in Pesaro, marking the first collaboration between his Bel Canto at Caramoor program and the Rossini Opera Festival. He returned to the Rossini Opera Festival in 2014 to conduct Aureliano in Palmira in the world premiere of the critical edition of the score which he edited for Casa Ricordi. His performances and the subsequent recording of this work garnered the 2015 prize for best rediscovered work at the International Opera Awards. In the summer of 2016, he conducted Aureliano in Palmira in its North American premiere for the Bel Canto at Caramoor International Music Festival

OPERA LAFAYETTE COMPANY BIO:
Opera Lafayette seeks to bring fresh interpretations of rediscovered gems and historical masterpieces from the 17th through 19th centuries to modern audiences. Founded in 1995 as The Violins of Lafayette, the company was part of a period instrument renaissance, a movement that provided a primary avenue for performing musicians searching for new ways to explore music of the past. Our debut season took place in the Salon Doré of the Corcoran Gallery of Art in Washington, DC and featured four chamber music concerts by some of France’s greatest 18th-century composers. In 2001, the company was reincorporated as Opera Lafayette, reflecting our increasing concentration on opera that unites musical, vocal, and choreography to present richly nuanced realizations of the 17th- through 19th-century repertoire. In 2012 and again in 2014, Opera Lafayette achieved international fame when, at the invitation of Chateau de Versailles Spectacles, we were invited to perform at Opera Royal in Versailles, France, closing with five sold-out performances.