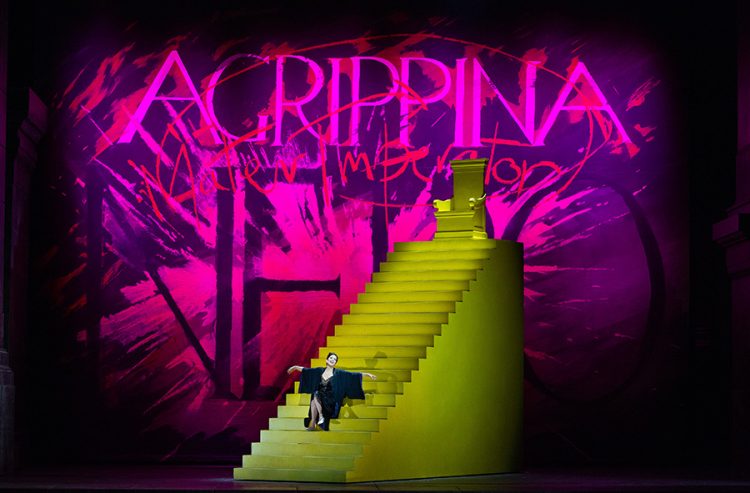 My favorite part of every opera season might come as a surprise to you. No, its not opening night at The Met, nor is it the Richard Tucker gala. Don’t get me wrong, I love those events. They’re fantastic evenings. The best part of which is the palpable sense of camaraderie between audience and performers. At this year’s Richard Tucker gala, for instance, I turned to my friend who himself is a budding opera lover, and said, “Come on, you gotta admit opera lovers really know how to throw a party!”

Instead, the performance I look forward to every year is the annual appearance of the English Consort under the direction of Harry Bicket at Carnegie Hall. Every year, they perform a piece by Handel, either an opera or an oratorio in a concert. No elaborate sets or costumes, no director with a potentially inane or even asinine concept. Simply Handel and his glorious music performed by people at the top of their game.

Every year without fail, it’s an incredible experience, at the end of which I always leave with two remarks. First, why do they only give one performance every year? They should at least stay in New York for a weekend. Second, how can people think of Handel as dusty and formulaic just because he’s Baroque? Yes, his operas can be four hours long, but with such engrossing music, does it really matter? Time, after all, is a relative concept in opera, and four hours can easily feel like an hour and a half. This is partially why at the beginning of the baroque revival in the 1950s and 60s, scholars just assumed that many of his arias occurred towards the beginning of his works. There was an element of wishful thinking in this. For example, why force yourself to wait until act III of Julius Caesar for Cleopatra’s haunting Piangerò la sorte mia. This is why I can’t wait for my series of three Handel performances this season, which began on February 6 at The Met with the opening night of the company’s premiere production of Agrippina. The rockstar cast included Joyce Di Donato, Brenda Rae, and Kate Lindsey, who are led by Harry Bicket. I am thrilled to have the chance to see him twice this season as opposed to just one performance at Carnegie Hall.

Mr. Bicket did not disappoint; his reading was crisp and buoyant, which kept the performance at a lively pace. The decision to perform the last two acts without an intermission certainly helped keep things moving. Unfortunately, the cast was mixed.

Joyce DiDonato dominated in the title role. Her Agrippina was oddly sympathetic, because she made you wish that women could have held power in Rome. She certainly was more savvy than all of the bumbling men around her. She’s also adept at finding the emotion at the center of Handel’s music. On the page, Handel doesn’t give singers much to hide behind. Or, for that matter, much to go on. All the emotional impact rests in the voice and what the singer does with it. DiDonato is more than capable of rising to the challenge; as is evident in her second act aria where she frantically ruminates on the best way to stop her plans from crumbling, only to decide in the end to have Claudius murdered.

Nero is perhaps the most unfortunate part of Agrippina’s legacy. It’s important to remember that this is a woman whose son was Nero and whose brother was Caligula. Which is perhaps even more reason to wish that Agrippina could have ruled on her own merits.

Handel’s opera portrays Nero as an oversexed teenager. Perhaps some things never change. Therefore, it seemed appropriate that this production called upon Nero to execute several stunts, some of which were sexually charged. Kate Lindsey deserves a medal for being able to do everything from sliding on the floor to (and I’m just going to say it) humping the throne. Some of these physical stunts actually added to the character. After all, what better way to show Nero’s disrespect and inadequacy for affairs of state than to show him literally violating the throne.

However, some of these acrobatics seemed gratuitous. I’m not sure why Lindsey had to sing an aria mid-pushup. I’m glad to know she can, but not quite sure why she had to. Unfortunately, while she was adept at the physical demands of the production, she didn’t quite measure up to the musical ones. Her voice frequently sounded pushed. That said, in her final aria in which Nero is firmly back under mommy’s control safely on his way to ruling, Lindsey was exuberant. The fact that she sang the aria while doing lines of coke added another dimension to Nero’s mania, even though eventually the joke did get a little stale.

Brenda Rae was a multidimensional emotionally volatile Poppea. She posses a very sweet silky coloratura soprano. She’s also no stranger to Handel. Last year, she sang the title role in Semele, at Carnegie Hall with the English Consort. She gave an excellent performance then, but here something seemed off. Her voice didn’t seem to carry to the back of the house. Perhaps that’s because The Met’s auditorium, with over 4,000 seats, is double the size of Carnegie Hall.

Matthew Rose is no stranger to comedy. Met audiences have seen him as Baron Ochs in Der Rosenkavalier. He played Claudius as an egotistical, inept head of government. Watching him play golf and attempt to seduce women while wearing a large suit and uncomfortably long red tie felt strangely familiar. He sang well, smoothly, and with a steadiness of tone. However, this production called on him to grunt in nearly every scene upon his entrance and exit. There are certainly many parallels between Claudius and Tim Allen in Home Improvement, but much like with Nero’s acrobatics, some of it lacked purpose.

True to most Handel operas, Agrippina has a bevy of countertenors. Iestyn Davies as Ottone and Christian Zaremba as Lesbo both gave great performances. Iestyn Davies has a great smoothness of tone which he used to great effect in his act II duet with Poppea. This duet had its world premiere last night, and I hope it gets picked up in other performances. It was not the only novelty in the score. The second act featured a harpsichord solo, which audiences might know from the battle scene toward the end of Handel’s Rinaldo. It was executed with great virtuosity by Bradley Brookshire.

Nicholas Tamagna sang strongly as Narciso, making an auspicious Met debut. As Pallante, Duncan Rock made quick work of his many ornaments, even if he seemed to occasionally push his voice.

David McVicar’s production is set in the modern Roman Empire, and by that I mean it’s as if the Roman Empire lasted to today. It managed to be funny, while at the same time highlighting the power politics behind the scenes. The central image was a throne atop a rather large staircase, which strangely makes one think of Pride Rock. However, more importantly, occasionally the backdrop for the throne would consist of a family tree of the Julio-Claudian emperors. Part royal linage, part football-playbook, it was honestly hard to tell if this was a family tree or a battle plan.

The choreography by Andrew George put the Pretorian Guard on display in all of their ridiculousness. McVicar’s other well-known productions, like his take on Handel’s Julius Caesar, are no strangers to dance. In the case of Julius Caesar, he was inspired by Bollywood to set the story in the colonial Egypt of the 1920s. However, in that production, the choreography made more sense on video where you could see it up close, as opposed to in the cavernous Met auditorium. Fortunately, the choreography here made perfect sense.

Despite its blemishes, The Met’s Agrippina is a cause for celebration. Handel operas need to be showcased and extoled for the wonderful pieces of music theater that they are. Whether or not The Met is too big a house for them is a separate issue. Regardless, Agrippina deserves to be seen. In true Handelian fashion, despite the mixed performances, this was a great evening at the theater-one not to be missed.