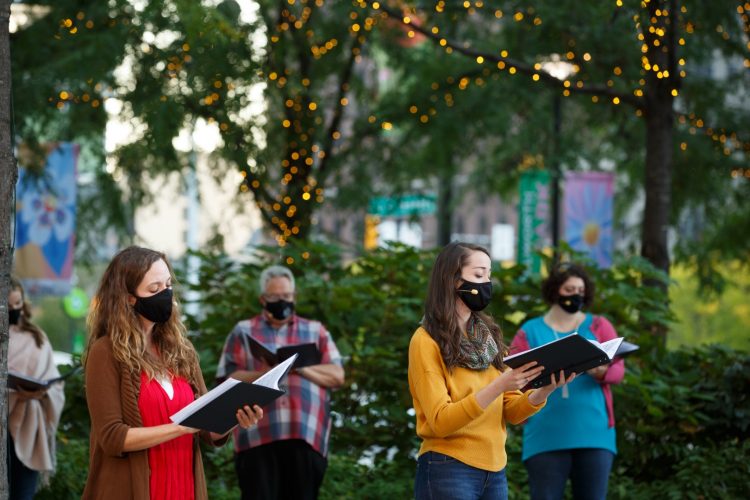 Unless you’ve been living under a rock, opera fans by now realize that COVID-19 has been particularly hard on the performing arts. Chorus and orchestra members of companies across the board have been out of work since early 2020.

Many companies have been forced to cancel their seasons. The Metropolitan Opera, for one, is not slated to schedule performances again until September 2021.

This is why two events that recently took place in New York and Philadelphia are so heartening.

In New York, The Met Opera Chorus performed Christmas music on the steps of The Metropolitan Museum of Art. This was part of the NYC Next Festival, which was organized to show the city’s enduring vibrancy even amidst the pandemic. While in Philadelphia, members of The Opera Philadelphia chorus got their moments to shine both collectively and individually as part of “LOVE in the Park,” a free concert that took place in Philadelphia’s Dilworth Park. The concert, which is now available to stream from the Opera Philadelphia Channel (via their site or app), features an eclectic mix of popular hits from opera and Broadway. Spanning the gamut from The Barber of Seville to Waitress, and plenty in between.

However, this performance was more than just a hit parade. Shots of Dilworth Park reveal that, despite COVID, people still manage to get out and have fun. Couples are shown sitting together eating hotdogs, parents are pushing strollers, and one guy (who got really into the festivities) was shown dancing with himself during Marissa Chalker’s performance of “I Could Have danced All Night.”

The evening had several standouts, including West Side Story’s “Maria,” sung by Topher Mihalka, and “Di Rigori Armato Il Seno,”‘The Italian Tenor Aria’ from Der Rosenkavalier, performed by Daniel Taylor. Both singers handled the music’s high tessitura with ease. And in the case of Mihalka, he thrived on Bernstein’s subtle dynamic shifts. ‘The Italian Tenor Aria’ is a showstopper, sung by all the world’s famous tenors, from Caruso on. Taylor brought warmth and smoothness to this staple. His portrayal of Tony in West Side Story’s “Tonight” showcased sweetness, even if he was slightly underpowered compared to Natalie Dewey’s “Maria.” Lauren Cook’s full-bodied lyric soprano was a joy to listen to in “Till There Was You” from The Music Man.

Edward Madison brought out the joy in “All Good Gifts” from Godspell. Joanna Gates sang both Carmen’s “Habanera” and “Cruda Sorte” from L’italiana in Algeri. Both Carmen and Isabella are experienced women and Gates’s performance had a healthy measure of frankness. In her hands, these women were not afraid to be blunt.

Corey Don Bonar’s heroic tenor was a glove-like fit for the serenade from The Student Prince, while Mark Malachesky gave a dynamic performance of “In Praise of Women” from A Little Night Music. He made the most of Sondheim’s tricky rhythms, while deftly navigating between sung and spoken text.

The final credits were accompanied by snippets of audience interviews showcasing a variety of age ranges. One little girl, about 4 years old, gleefully said that she was “dancing all night”. The consensus was clear; the audience members needed the performance just as much as Opera Philadelphia’s chorus needed to perform. It’s always good to be reminded that music is part of what makes any city dynamic, especially now during this pandemic.