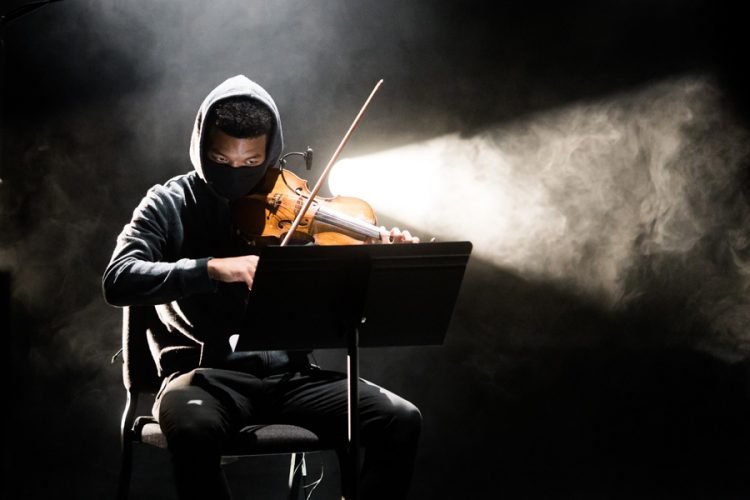 One of the watershed experiences of my life as an opera lover was attending a lecture at The Met, given by William Berger. During his talk, he described his understanding of the significance of the soprano voice in opera. He said that being an opera singer in the 19th Century was one of the few ways a woman could make money for herself and manage her own finances. He used this fact to draw a parallel to the use of the soprano voice on stage, noting that you could hear it soaring above everyone else in big ensembles.
I was reminded of that lecture, watching Cycles of My Being Clip on the Opera Philadelphia streaming app, with music by Tyshawn Sorey and text by Lawrence Brownlee and Terrance Hayes. The piece is a song cycle, meant to reflect the experience of black men in America. The first thing I noticed while watching this is how Brownlee’s voice can just cut through the air and grab your attention. His voice is, in a way, its own clarion call that demands to be heard.

The opera world is in a time of great transition. On top of the pandemic, opera companies in the United States need to acknowledge the on-going dialogue about racism. There are several ways of doing this. Seattle Opera highlighted minority businesses in their Summer Recital series, The Drunken Tenor. Next year, The Met will finally perform an opera written by a Black composer, when Terence Blanchard’s Fire Shut Up in My Bones takes the stage on the opening night of the 2021-2022 season.

Opera Philadelphia however has made a noteworthy effort to bring black composers and performers to the forefront. Since March of 2017, Lawrence Brownlee has been the Artistic Advisor to the company. Before he took center stage in Cycles of My Being, he headlined the season opener with an installment of his recital series, Lawrence Brownlee & Friends, which featured Lindsey Reynolds and Karen Slack—two black sopranos. Additionally, in the now-mythical pre-COVID past of 2015, Brownlee sang the lead in Charlie Parker’s YARDBIRD; an opera about the jazz great, which Opera Philadelphia brought to the Apollo Theater in Harlem.

In contrast to the florid music customary to the heroes of Bel Canto opera that Brownlee is known for, the majority of the music in Cycles of My Being is declamatory and lacking in traditional aria structure. Instead, the music is driven by simple composition techniques and orchestral colors. These can range from simple ostinato figures in the bass, which here are used interchangeably to express fear and anger, as well as joy. As well as drones for the clarinet and strings, which represent the tenacious nature of hatred.
The only time the song cycle ventures into familiar territory is toward the end, with a brief section of call and response, where Brownlee led the instrumentalist who had a brief speaking part in a way that a soloist would lead a gospel choir.

The performance was filmed in black and white, which allowed the performers to stand out clearly as individuals. Cycles of My Being began with a recorded Black Lives Matter chant. Over the din, you can hear the activist leader say, “Let’s take a knee for nine minutes in honor of those who lost their lives.” This was a subtle but poignant remembrance of George Floyd. There was a Black Lives Matter sticker on a music stand and before starting Brownlee puts two photos of Black Americans who died at the hands of racial violence on his own. These photos of Emmitt Till & George Floyd serve as a reminder of the sad fact that 60 years later, violence against black people is still constantly current.

The music was composed by Tyshawn Sorey to text written by Terrance Hayes and Lawrence Brownlee, adapted from Hayes’ book of poetry called “American Sonnets for my Past and Future Assassins.” In a post-performance conversation, Sorey mentioned that he avoided standard musical forms when composing this piece because he wanted each movement to be driven by the emotional force of the text. As a result, the piece feels very organic.

The libretto is also incredibly direct.

The piece starts with pointed questions to America; “do you love the air in me, as I love the air in you?” from the first movement, Inhale, Exhale. A particularly moving section of the work is the second movement entitled Hope (pt. 1) where the libretto defines hope through a catalog of its opposites. “When walking hope is a swagger / When breathing hope is oxygen.” The sixth song, Each Day I Rise, I Know has an incredibly virtuosic clarinet solo. During the post-performance conversation, the clarinetist, Alexander Laing said that he named it, The Testifying Solo.

Cycles of My Being provides an unflinching look at what it is like to be a black man in contemporary America. The piece originally had its world premiere at Opera Philadelphia in 2018 and it went on to be performed at Carnegie Hall the same year. The post-performance was filmed the day that the verdict was announced in Breonna Taylor’s murder trial. Brownlee noted that unfortunately, despite the fact that the piece premiered in 2018 it is still relevant in 2020 and it is likely to still be relevant in 2025.

Photo: Violinist Randall Mitsuo Goosby in Cycles of My Being.