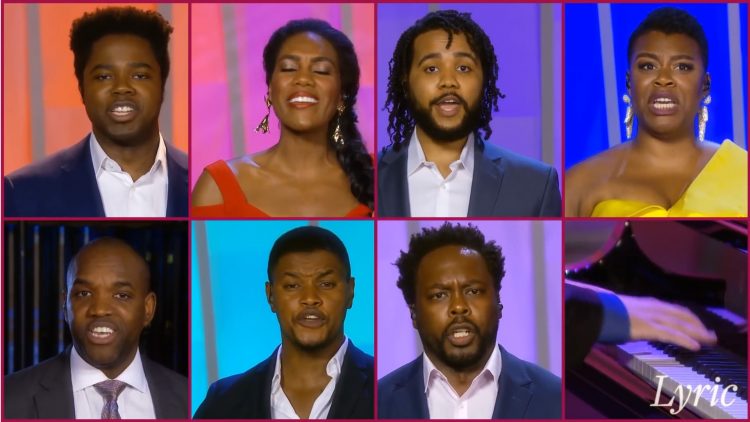 For anyone who has spent the past year living under a rock, 2020 is a hellscape. But, say what you will about coronavirus, the ongoing conversations over race, and the presidential election; this year has provided us with some prime meme-fodder.

One of my favorite memes, which has been circulating around the classical music groups on Facebook, shows a picture of a house burning down, with the caption “the world right now,” and in the panel below it, Will Ferrell screams “I have a degree in opera!” As if totally oblivious to the current state of society.

While that meme is funny, Lawrence Brownlee’s recent concert, the latest edition in his “Lawrence Brownlee and friends” series —which opened Opera Philadelphia’s virtual 2020-2021 season—proves it wrong. Featured on the Opera Philadelphia app, from now until the end of the season, it begins with Brownlee vocalizing at the piano. Anyone who has had the pleasure of seeing him knows that he brings an uncommon richness and depth of voice to coloratura tenor roles, like Tonio in La fille du régiment and Arturo in i puritani. These are roles that have historically been the domain of high flying, brighter-voiced stars like Pavarotti. But to hear Brownlee’s stentorian voice for the first time in a long time was so refreshing, there are scarcely words to describe it.

The performance, which also featured sopranos Karen Slack, Lindsey Reynolds, and Sarah Shafer with dynamic accompaniment by pianist Myra Huang, was interspersed with one-on-one conversations between the performers. These conversations covered a wide range of topics; everything from what inspired them to become opera singers, to their connections to the city of Philadelphia, and how they hope the opera world will change for the better in response to COVID 19.

This pandemic has produced a variety of responses from opera companies across America. The sad truth is that we all know that we will not be able to gather in the theater to experience live opera in person until at least 2021. While that prospect is disheartening, it is unfortunately necessary for the art form and indeed for humanity to survive. The true challenge this pandemic poses to opera companies is how can they redefine what opera is and refocus their mission to suit the current needs of society, and to allow the arts to speak to the current moment in all of its complexity.

There will always be a place for grand opera, and all that entails—getting dressed up, going to a big building, having champagne on a balcony, and then sitting in a gilded auditorium a la Frasier, but that is not what we need right now. And anyone who goes to the opera solely to experience such external trappings is simply not a true opera lover.

By contrast, Opera Philadelphia’s response—which gets back to the basics of the genre, focusing on the power of the human voice to convey emotions through song, while highlighting the connections between the opera company and the community it serves—is by no means the only response, but it is certainly a viable one. Additionally, Opera Philadelphia deserves major props for presenting a concert where 3 out of the 4 principal singers were people of color. In a time where the Opera Community is striving for greater representation both on stage and off, these singers all of whom are at the top of their game clearly demonstrate that talented singers of any race have always been there, they just need to be given greater opportunities to share their gifts.

A “Lawrence Brownlee and friends” concert contains a distinct mixture of popular operatic arias, spirituals, and more popular selections from the American songbook. This concert is no exception. However, alongside arias by well-known composers, like Donizetti, Massenet, and Irving Berlin, this concert brought female composers to the foreground. The program included “La mer est plus belle” by Nadia Boulanger, performed by Lindsey Reynolds as well as “Watch and Pray”, an incredibly moving setting of a spiritual by Undine Smith Moore.

The concert began with soprano Sarah Shafer singing the “Laudamus Te” from Mozart’s Mass in C-Minor the tessitura fit her perfectly. It sits in the upper register of Shafer’s limpid lyric soprano, however as enchanting as that was, Shafer’s performance of the spiritual “Deep River” was full of pathos allowing her to demonstrate her full range as a performer.

Lindsey Reynolds deployed Coloratura embellishments with great facility, as evident in her rendition of “Art Is Calling Me”—that evergreen aria from Victor Hubert’s The Enchantress. Here, she added an extended cadenza, which was a joy to listen to. However, her true talent as an artist lies in her ability to navigate between sung and spoken text. She dove in and out of Massenet’s “conversational melodies” in “Je sui encore” with aplomb.

In combination with her superb skills as an actress, she gave a bravura performance as the child in “Watch and Pray,” arranged by Myra Huang. This piece, essentially a conversation between a slave mother and daughter, on the evening before the daughter is to be sold down river, does not require any high flying embellishments or other hallmarks of refined classical technique, but it is repetitive and her adept acting skills brought urgency and nuance to each repeated phrase of “Mama, is massa gonna sell me to Georgia?”

The role of the mother was sung by Karen Slack. She doesn’t have that much text to sing, however Slack had to let loose with a wordless wail, before telling her daughter to “Watch and Pray”. To do that requires the singer to be the voice of an entire population, articulating the pain and tiredness that accompanies the separation of a family, something that unfortunately was forced on black Americans for centuries. Her large instrument was up to the challenge. Early on, her rendition of “Il est doux, il est bon” from Herodiade by Jules Massenet showcased her voice in all its richness. Herodiade is a rare opera and hopefully one day she’ll get to sing a full performance of it.

The majority of Brownlee’s selections consisted of spirituals and other pieces from The American Song Book, like “Anything you can do, I can do Better” where he engaged in playful vocal one upmanship with his colleagues. As always, his performances were brimming with energy. Witness for example, his take on “My Good Lord Done Been Here” where his joy was infectious. Additionally, he offered a refreshing interpretation of “Allegro io son”, heavy-duty opera fans will recognize this aria as an Italian translation of the tenor aria from Donizetti’s seldom performed “Rita”. In this Aria, a battered husband sings of his relief that he’s finally free of his wife. Typically, tenors take a meek approach to this piece, but Brownlee gave a rather buoyant performance. He was less relieved than happy to have a spring back in his step.

All things considered, this concert augers well for the rest of Opera Philadelphia’s season. All the participants gave engaging performances, and the format of the concert can serve as a model for other companies as they gain back their footing in the pandemic. Next up is a rebroadcast of La Traviata starring Lisette Oropesa. It will be available Oct-30th, stay tuned.