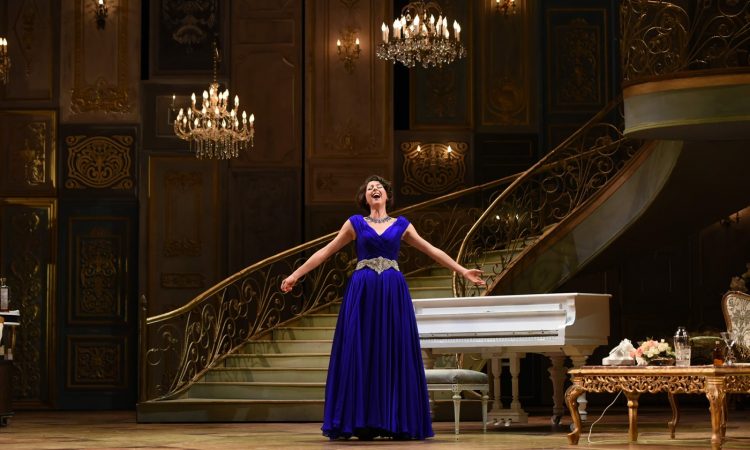 I know it has been a while, dear readers. But if you can find it within your power to remember all the way back to March when the pandemic had just begun, La Traviata was one of the first operas that The Met streamed publicly on its website. At the time, my first reaction to this choice was that it was well-intended, but slightly tone-deaf. After all, La Traviata is one of the most popular pieces ever written, with a score that is the equivalent of operatic comfort food. But, on the other hand, its leading lady dies of tuberculosis. And does an opera where the heroine dies of a respiratory illness really set the appropriate mood one week into a pandemic?

However, Opera Philadelphia changed my mind.

In the pre-performance lecture, Misled Transformation of a Heroine, on The Opera Philadelphia Channel (their new app and streaming service), Dr. Michael Mohammed took a scholarly quote which proffered that diseases bring out the ugly truths of society and shows where things need to change.

The way a society responds to problems of disease reveals its deepest cultural, social, and moral values. These core values – patterns of judgment about what is good or bad – shape and guide human perception and action. – Allen M. Brandt AIDS: From Social History to Social Policy

Just in case anyone needs a refresher, Violetta Valéry—the wayward woman of the title—is opera’s evergreen “hooker with a heart of gold.” In the last months of her very short life, she makes the daring decision to fall in love and begin a new relationship with a young idealistic nobleman, who has no idea how the world works. His father intervenes, forcing Violetta to end their relationship, in order to restore respectability and honor to the family, and most importantly to his daughter who is of marriageable age. Violetta performs this major sacrifice and dies in penury on the outskirts of society. It is not really about her tuberculosis, but the illness itself serves as a means to expedite her death, adding urgency to her plight. It is for this reason that it is easy to update Traviata and change the disease to other major scourges, like AIDS. Because, unfortunately, diseases always affect society, and it is those on the margins that suffer most.

This Traviata—which went live on the Opera Philadelphia Channel on Friday, October 30—is a rebroadcast of a 2015 performance, starring Lisette Oropesa. Opera fans are by now accustomed to rebroadcasts of prerecorded performances, The Met does it nightly. But this is a special rebroadcast, marking an important watershed moment in the history of modern opera. This performance marked Oropesa’s role debut. And since then, she has become a definitive Violetta, singing her first Met performances of Traviata shortly before the pandemic. So, what makes her so note-worthy? She’s a coloratura soprano who is also capable of deploying hallmarks of bel canto technique such as diminuendo and pianissimo to heighten Violetta’s tragedy. For instance, the most notable moment in her performance came at the beginning of Act 3 where she sang her opening lines from her deathbed barely audible. In a discussion with Lawrence Brownlee over Zoom, Oropesa reflected on the five-years that have passed since this performance for Opera Philadelphia.

Additionally, Traviata only has three major characters, making it ideal to reopen theaters as the world grapples with COVID-19. Oropesa recently reopened Madrid’s Teatro Real with Traviata, to great acclaim. Opera Philadelphia’s production, directed by Paul Curran, updates the action to the 1950s, an image of Violetta on the silver screen in her upscale apartment before the opera begins, posits the idea that she is a Hollywood starlet—perhaps a Marilyn Monroe type figure, who also died very young, and had a sex life that was lived very much in the public eye. Curran’s production also capitalized on the grandeur of the demimonde.

For instance, in Act 2, Alfredo’s summerhouse was less a cottage and more a mansion. Yet, Curran is able to demonstrate opulence without overdoing it. Anyone who has seen the 1999 Franco Zeffirelli production at The Met will doubtless remember the gigantic chandelier in Violetta’s apartment which dwarfed the party guests. Also, Curran made the interesting decision to constantly populate the stage with supernumeraries, whether they be stragglers at the party in Act 1 or workers at Alfredo’s estate. Particularly in the latter case, they seemed to be intruding on extremely intimate moments, such as the duet between Violetta and Papa Germont, but this was, perhaps, the idea. More importantly, Curran emphases Violetta’s swift change from a party girl in Act 1, to head of Alfredo’s household in Act 2.  We know from the beginning of the duet in Act 2 that Violetta presents Germont Sr with account books to show that she’s made her own money and isn’t after Alfredo’s.  But, here, Alek Shrader’s Alfredo is literally a man-child who spends the beginning of Act 2 lounging around and playing air guitar on his tennis racket.

As her naive love interest, Alek Shrader also processes a solid handle on the finer points of bel canto singing, however, he tended to push in his high register.  Throughout his career, he has been associated with lighter bel canto roles like the Count Almaviva and Don Pasquela’s Ernesto.  Perhaps, Alfredo was a size or two too big for him.  As his father, Stephen Powell has a very smooth Verdi baritone. Corrado Rovaris led a buoyant reading of the score, the most notable facet of his interpretation was the expansive take on Violetta’s farewell “Amami, Alfredo.” Many conductors take a fast tempo, portraying Violetta offering a hasty goodbye while she runs out of the room.  Here, Rovaris slow tempo allowed Alfredo and Violetta to have more of an intimate ‘proper’ goodbye.

This pandemic has offered opera companies a chance to experiment with different ways of performing, thereby expanding what opera can be.  Nonetheless, it is occasionally good to be reminded of the glories of past performances.  Especially when they involve singers that are still active and still have so much potential.