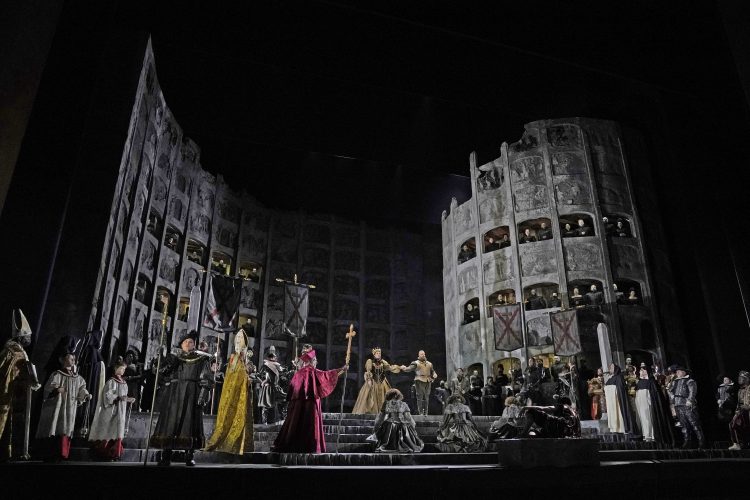 If Verdi had lived to see the American opera scene of the mid-to-late 20th century, he might be overjoyed to realize that the most frequently performed operas at the Metropolitan Opera could be listed as ABC: Aida, La Boheme, and Carmen. When he wrote Aida in 1871, he wanted a hit and all the economic prosperity that would come with a popular productions’ success. If history is any indication, it would appear that Verdi could say check.

However, it was Don Carlos—Verdi’s most ambitious work that was originally written for the Paris Opéra in 1867— which Verdi originally hoped would be his cash cow. Despite a run of 40 performances when it premiered, that is not exactly what happened. Several revisions and one Italian translation later, the piece still languished until 1950. In that year, the Met’s transformational General Manager, Rudolph Bing who would eventually bring the Met to its current home at Lincoln Center, staged a production on Opening Night of his inaugural season. Thus, the Met was the first to bring Don Carlo into the standard repertoire. However, the opera was still in its Italian translation.

Now, Met audiences finally get a chance to see the original French version when it debuts in a production directed by Sir David McVicar. So, why is this a big deal? And, for that matter, why are there multiple versions of this Verdi opera? That answer has several parts. First, we need to understand what it meant to write for the Paris Opéra. France was one of the major capitals of opera in the 19th century, and in Paris specifically, opera-going was codified. It was not like today where Met audiences can see Wagner’s Ring one night and The Merry Widow the next. The theater which one chose to attend would determine what kind of opera its audience would see. And the Paris Opéra was the home of French Grand Opera, a genre predicated on epic works with plenty of spectacle.

In fact, Don Carlos was one of the first operas to include elements of electric lighting in its production. The chance to write large-scale works made a commission from the Opéra a life goal for many composers. Yet, these composers were not necessarily given carte blanche. It was a rule that all pieces performed at the Opéra had to end a half hour before the last train left the city. This is ostensibly why Verdi had to make revisions: he simply wrote too much.

So, Verdi cut out the first act of Don Carlos. This was of course a problem; the opera tells the story of the ill-fated love between the son of Philip II; Crown prince Carlos of Spain and Princess Elizabeth of France, who is promised to be his future bride. After fleeing the Spanish Court and living in France incognito, he finally meets Elizabeth, declares his love for her, and the future momentarily seems bright. Until news comes that a peace treaty has been signed, ending a war between France and Spain, where Elizabeth is to be given in marriage to Philip—Carlos’s father. Naturally, this being an opera, Elizabeth accepts in order to end the war, and tragedy ensues.

Set in France’s Fontainebleau Forest the first act depicts the first meeting between Elizabeth and Carlos, as well as the plight of the peasantry, which is a driving force behind Elizabeth’s actions which set the rest of the plot in motion. At the risk of stating the obvious without the complete first act, the predicament of the characters in the oppressive atmosphere of the Spanish court dominated by the Inquisition, doesn’t make sense.

The other, and perhaps more important, reason that sets Don Carlos apart from its Italian counterpart is the French language itself. Even in the 1860s, opera in Italy was still written in a very stylized language with a lot of purple prose throughout the libretto. Directness in opera would come later, during the Verismo school which was dominated by Verdi’s successors. But in France, opera librettos had a degree of directness to them that was lacking in the poetic extravagance of its Italian counterpart.

To be clear, the Italian version of Don Carlos is indeed a translation and not an adaptation to please Italian censors, as was the case with La Favorita, the Italian version of Donizetti’s La Favorite. Additionally, when setting a translation to already existing music, one must make sure that the words fit the music. As such, certain passages of the Italian translation lose some of the ambiguity of the French language. Don Carlos is an opera where very little visible action takes place. The characters motivations are more implied than shown. A good example of this is during the duet between King Philip and the Grand Inquisitor. The priest asks the King what punishment to give his son for having a supposed affair with the Queen, as well as for potentially leading a revolt in the Netherlands. In the French version, the King replies, “Everything and nothing” and in the Italian version, he answers, “extreme measures.”

Additionally, Verdi’s music goes a long way to heighten the internal conflicts of the plot. There are very few show-stopping arias, and the big one, the veil song, only exists to add local color with its Moorish inflections. Verdi also turns common operatic tropes on their head. For instance, the love duet for Elizabeth and Carlos, in the garden of the monastery, is not a typical love duet. They sing at cross purposes, and the only time their music shows any sort of cohesion is when they both have a quiet outburst of frustration.

David McVicar’s production combined the best elements of the previous two stagings. It mixed John Dexter’s grandeur, and Nicholas Hytner’s austere Orwellian atmosphere. This fosters a more than apt vision of Spain at the apex of the inquisition. Prior to the start of act one, a large incense dispenser swung over the set, while a somber bell tolled periodically. This allowed the audience to feel the ever-present power of the catholic church before the opera even started. It should also be said that the incense dispenser became a lighting fixture in the monastery of Saint Just. Therefore, the power of the church literally became part of the architecture for the sets.

Additionally, the grotesque choreography during the Auto-Da-Fé scene highlighted the barbaric side of King Phillips Coronation festivities without falling into the pitfalls of previous productions. Incase anyone needs a reminder Auto-Da-Fé, which means “Act of faith” in medieval Spanish refers to a ceremony in which heretics and others who have ran afoul of the inquisition, were publicly shamed, tortured or even executed. The severity of your punishment depended on the nature and gravity of your offense, but of course, Verdi being the highly skilled dramatist that he was, decided that his heretics should automatically be burned at the stake. The fact that these displays of blood lust took place publicly, in front of the Glitterati of the Spanish court, made these ceremonies even more barbaric. However, the difficulty with this scene, in the larger context of the opera, is that there’s so much going on. It’s not simply an Auto-Da-Fé, but an Auto-Da-Fé in celebration of the Kings coronation, which is occurring simultaneously. This can sometimes cause the execution of the heretics to get lost in the stage business, as was the case with the John Dexter production. The other potential pitfall is how to stage the executions without looking trite or kitschy. For all its good points, this was the problem of Nicholas Hytner’s production whereas the curtain came down on lit pyres, it was obvious that the heretics were by that point transformed into blow up dolls.

Here, McVicar can be praised for striking a balance. While the audience got to see the heretics tied to giant candles at the end of the scene, a dancer who provided the courtly entertainment prior to the executions performed a truly demonic routine. He seemed to be a court jester. Someone who either didn’t understand what was truly going on, or was attempting to highlight the Hypocrisy of Philip the Second’s regime.

Musically, Don Carlos is through composed. More so than its Italian translation, which has more obviously demarcated “numbers”. This puts the opera in line with Wagner’s later music dramas and creates an altogether more compelling theatrical experience. For the most part, the piece was performed with very few cuts. This allowed for important characters, who aren’t seen until later in the Opera, to be more fleshed out. Such was the case with the ensemble at the end of the prison scene. Where Philip II, Queen Elizabeth, and Princess Eboli were all afforded the chance to react to Rodrigue’s murder. However, despite the opportunity to get insight on these characters, the music was slightly too repetitive. Proving that perhaps just a few other cuts were needed.

Despite its occasionally repetitive nature, the conductor Patrick Furrer, led a dynamic reading of the score. He demonstrated both the music’s expansiveness, as well as the pomp and energy, which are hallmarks of any Verdi opera. The singers ran the gamut from Jamie Barton’s splendidly dramatic characterization of Princess Eboli to Matthew Polenzani, who has made a name for himself in French roles, such as Nadir in The Pearl Fishers and brought a sweetness and naivety to Don Carlos. Here he was matched by Sonya Yoncheva, who was a refreshingly lighter voiced Elisabeth de Valois. In the Italian translation Elisabeth is typically played by a darker, heavier soprano voice, such as Anna Netrebko, who until recently, was slated to sing Elisabeth in the Italian version, Don Carlo next season. As Rodrigue, Etienne Dupuis was appropriately dynamic and proactive thereby counter balancing Carlos’ weak nature. John Relyea, as the Grand Inquisitor was awesomely villainous and truly deserved the fear and paranoia of the other characters.

Eric Owens possesses a very warm Bass voice. He deftly explored King Philippe’s complexities. Several years ago, he hosted the Met Opera’s National Council Auditions and treated the audience to “Ella giammai m’amo”, as the judges deliberated. It was a thrill to finally see him give a complete performance of the role.

As a genre, French Grand Opera has yet to truly rebound from its heyday in the 19th century. There are various explanations for this, perhaps these works are too expensive to stage, perhaps we are still waiting for the right singers to come along. Either way, these are questions for another article, for now let it suffice to say that when audiences do get the chance to see a French Grand Opera staged as well as this, they should run to see it. It might have taken Don Carlos awhile to enter the Repertoire, but the Met’s new production highlights the tension between the personal and the political giving the work its immense staying power.