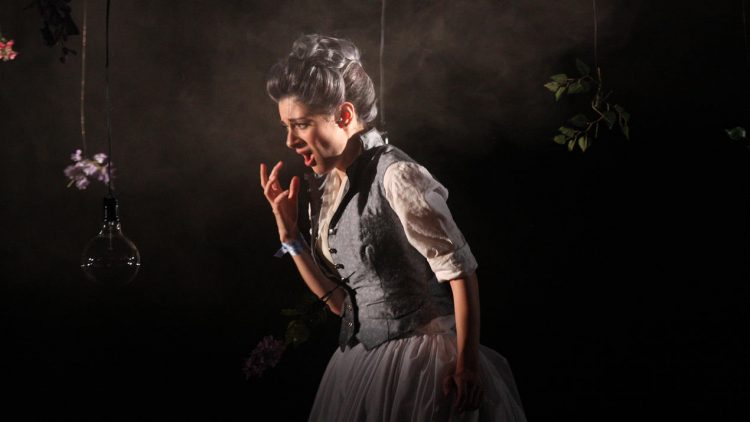 In a recent article in The Observer about The Met’s revival of La Boheme, James Jorden, makes a startling observation. He states that despite the popularity of The Met’s iconic Zeffirelli production, it eschews the central element of La Boheme’s tragedy, namely, that by watching it, it is very hard to get a sense that the characters are young and experiencing all of the emotions associated with a youthful love affair. I was reminded of this on November 15th when I attended a performance of Julliard Opera’s Così fan Tutti.

Così’s libretto has a bad reputation. The common belief is that it doesn’t make sense. How can Mozart and Da Ponte expect audiences to believe that grown women would be so easily tricked into thinking that their boyfriends, disguised as Albanians, are actually different people? Yet, Julliard’s ground-breaking production directed by David Paul reminds us that much like La Boheme, these characters are not adult aristocrats but love-sick young adults.

The action was moved from a mansion in Naples, Italy to Naples West High School somewhere in present-day America. Banners behind the bleachers proclaimed, ‘Congratulations Class of 2019!’ which puts the opera squarely in the weeks before graduation, when even the most established of high school sweethearts have to face doubts about their relationship.

Without giving away the ending, it’s important to note that Così has had a very interesting production history, which dates back to its premiere in 1790. This is because Così is one of those operas that everyone thinks they know the story of, but they don’t. Traditionally, the trick is revealed at the last possible second; the sisters forgive their boyfriends, and everyone falls back in love with their original partner.

However, in the libretto, Mozart and De Ponte, left things open-ended. Mozart, who was known for having several affairs, was more interested in offering a musical depiction of the psychology of relationships. He didn’t seem to care if those relationships followed the lines of standard cultural norms. Therefore, the libretto has always allowed for the story not to end so cleanly. The two couples do not need to re-form in the same way they were at the beginning and the partners could still be angry at one another.

This has provoked many reactions over the centuries, most famously Beethoven’s Fidelio (1805) about a steadfast wife who dresses as a man to rescue her husband from prison and was meant to emphasize everything Così calls into question. Yet, if you emphasize the youth and naivety of these characters as this production does, then not only does the story make much more sense, but the audience understands that the question is not ‘are women immoral?’ but ‘are these four people of both sexes, extremely naïve about the nature of adult relationships’?

It was one of those rare evenings at the theater where everything just coalesced into a performance whose musical values were flawless. The conductor, Nimrod David Pfeffer, led a buoyant, exciting reading of the score and everyone was in fine voice. It feels strange to note that James Ley and Erik van Heyningen playing Ferrando and Guglielmo respectively were surprisingly physically adroit. Yet, this must be stated because they heightened what would have otherwise been a throwaway moment in the score. When trying to impress the ladies, Ferrando and Guglielmo, now dressed not as Albanians but as new preppy kids, complete with pastel shirts and bright yellow sweaters, managed to plant one foot on the leg of their respective sweethearts who were sitting down in order to show their sexual prowess.

Of course, the scheme could not have been possible without the machinations of Despina and Don Alfonso, sung by Mer Wohlgemuth and William Socolof. They each deserve credit for making their sexual tension palpable. William Socolof also stood out for his incredibly youthful portrayal of the character, as this Don Alfonso was not an ancient confirmed bachelor but instead was a high school jock whose ideas about women and relationships were just as questionable as those of his greener friends. Megan Moore, playing Dorabella turned “Smanie implacabili” into the teenage tantrum that we all know it really is.

This production was also notable for setting the action in all the typical places where high school students would congregate and share secrets. For instance, instead of taking place lounging around the mansion while having coffee, “Ah guarda sorella” occurred in the girls bathroom. Similarly, the climactic scene in Act 2 which not only features Fiordiligi’s aria, “Per pietà” but also contains all of the final confrontations, takes place in front of the bleachers now all decked out for prom and graduation. This brought “Per pietà” sharply into focus as this is supposed to be a happy time in their young lives. Instead Fiordiligi is facing what is her first betrayal. And perhaps that is the real question Mozart is asking us – the tragedy of youth as both the young people of both Boheme and Così will tell you, is that it’s way too short and can be quickly interrupted by major calamity.

Whether it’s betrayal or Tuberculosis, it doesn’t really matter, what’s important is whether we can stand up to these challenges and become wiser people.