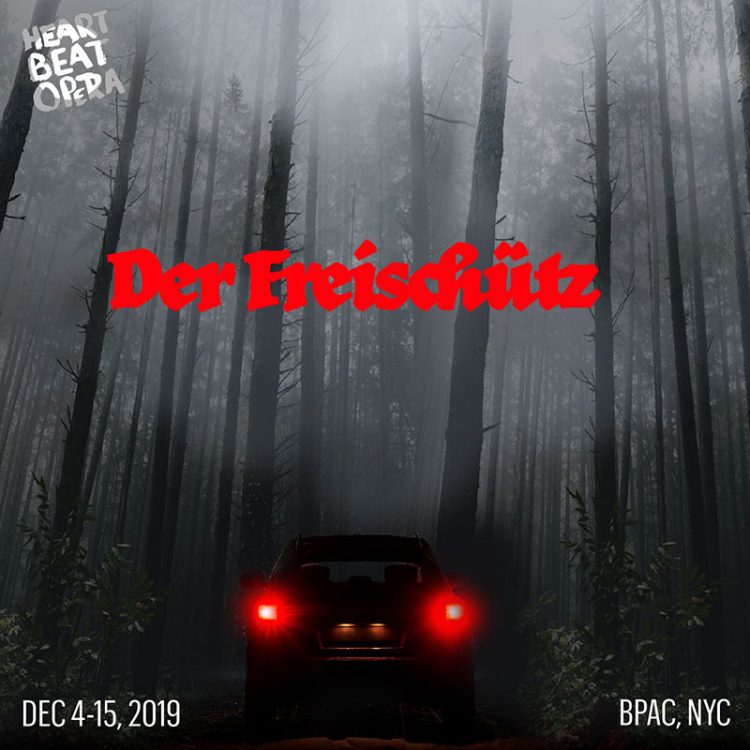 Gregory Moomjy has joined Indie Opera Podcast to writer opera reviews and articles about opera. His first article is about the Pharaoh Akhnaten and the reviews cover Akhnaten and Cosi fan Tutte.

“Baby, It’s Cold Outside”, is another classic song whose lyrics are highly problematic in our current day and age.

Daniel first met Ethan Heard in 2006 when he worked on a production of Street Scene with him.

Louisa and Daniel have created an updated version of Der Freischutz to somewhere in modern day mid western America.

This will be Heartbeat Opera’s largest cast used yet, 17 total onstage.

Dan has orchestrated for a chamber orchestra of 7 which will feature members of Cantata Profana:

Also there will be newly created underscoring during the spoken scenes that will support the dramatic moments. In the original only the Wolf Glen scene included underscoring.

Chloe Treat is the co-director for this production.

The movies and sound worlds of the filmmakers of David Lynch & Lars von Trier have inspired the style of this opera production.

The choice of arrangements and instrumentation comes out of many conversations between director and music director:

Der Freischutz is a real “numbers” opera containing many folk-song like arias and ensembles, so the band is styled after a dance band.

Louisa and her husband, Michael Attias created new English language dialogue, however, the songs will be sung in German.

Heartbeat tackles our first work by Verdi, creating a reordered, 90-minute version of Macbeth entitled Lady M. We center Lady Macbeth’s experience, looking at the story through a contemporary American lens. What does it mean to be an ambitious, driven woman today? How do power and wealth corrupt? And how do we strip away clichés that have accumulated around this story — and the character of Lady Macbeth in particular — in order to encounter this thrilling material in a fresh way? For 6 singers and 7 players, our adaptation features electronics, cutting-edge sound design, and three female soloists as the Witches, honoring Shakespeare’s original text and bringing Verdi’s thrilling music to life in surprising and otherworldly new ways including surround sound, vocal distortion, pitch manipulation, texture, and exaggerated dynamic contrast.

The cast of six remaining characters are:

Daniel has had a recent success with his Fantasy on Twin Peaks for the Dover Quartet.

EPISODE 69, JANUARY 2020 our guests will be soprano, Jennifer Zetlan and composer, Ricky Ian Gordon to talk about the new opera, Ellen West

has been performed by the Dover Quartet, Minnesota Orchestra, Choir of Trinity Wall Street, Nashville Symphony, Cabrillo Festival Orchestra, and Lorelei Ensemble, at venues including Carnegie Hall, (le) poisson rouge, Royal Albert Hall, Beijing Modern Music Festival, and David Lynch’s Festival of Disruption, and has been featured in the New York Times and WNYC’s Soundcheck. Daniel has received the Charles Ives Scholarship from the American Academy of Arts and Letters and two ASCAP Morton Gould Awards. Recent projects include the release of A Demonstration on New Amsterdam Records, Canal Songs for the Albany Symphony’s Erie Canal bicentennial, and a fantasy on Twin Peaks for the Dover Quartet. As a performer, Daniel has collaborated with such luminaries as David Shifrin, Ani Kavafian, Yura Lee, and the Imani Winds. This spring, Daniel was the pianist for Steven Spielberg’s upcoming film West Side Story.

Daniel is co-Music Director of Heartbeat Opera, for which his re-orchestrations of classic operas have garnered national acclaim, core member of Cantata Profana, and rotating principal pianist of NOVUS NY. Daniel’s work has been described as “richly detailed yet delicate” by the New York Times and “witty” and “ingenious” by the Wall Street Journal. Daniel received his DMA from Yale University in 2018.