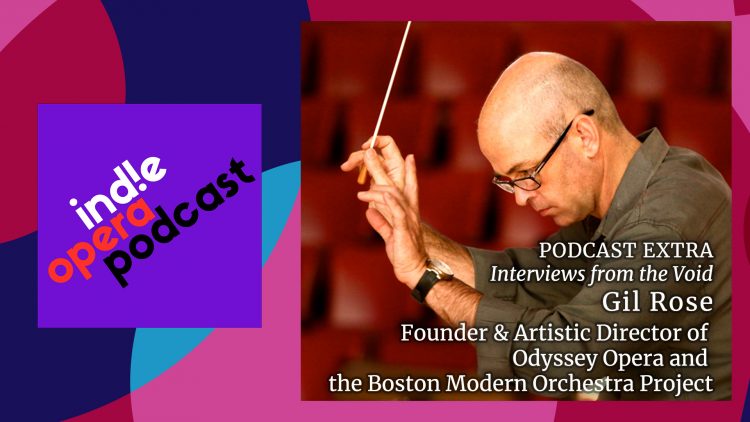 Gil Rose, Founder & Artistic Director of Odyssey Opera and the Boston Modern Orchestra Project talks about the three remaining opera productions of his 2020-21 season: Rossini’s – Elisabetta, Regina D’Inghilterra; Britten’s – Gloriana; and German’s – Merrie England. Also what it felt like to win the 2020 Grammy for best opera recording of composer Tobias Picker’s Fantastic Mr. Fox that resulted from a co-production by Odyssey & BMOP.

In 1996, Mr. Rose founded the Boston Modern Orchestra Project (BMOP), the foremost professional orchestra dedicated exclusively to performing and recording symphonic music of the twentieth and twenty-first centuries. Under his leadership, BMOP has won fourteen ASCAP awards for adventurous programming and was selected as Musical America’s 2016 Ensemble of the Year, the first symphony orchestra to receive this distinction. Mr. Rose serves as the executive producer of the BMOP/sound recording label. His extensive discography includes world premiere recordings of music by John Cage, Lukas Foss, Charles Fussell, Michael Gandolfi, Tod Machover, Steven Mackey, Evan Ziporyn, and many others on such labels as Albany, Arsis, Chandos, ECM, Naxos, New World, and BMOP/sound.

In September 2013, he introduced a new company to the Boston opera scene, Odyssey Opera, dedicated to eclectic and underperformed operatic repertoire. Since the company’s inaugural performance of Wagner’s Rienzi, which took the Boston scene by storm, Odyssey Opera has continued to receive universal acclaim for its annual festivals with compelling themes and unique programs, presenting fully staged operatic works and concert performances of overlooked grand opera masterpieces. In its first seven years, Mr. Rose has brought 30 under represented operas to Boston, and introduced the city to some important new artists. In 2016 Mr. Rose founded Odyssey Opera’s in-house recording label with its first release, Pietro Mascagni’s Zanetto was followed by a double disc of one act operas by notable American composer Dominick Argento, and the world premier recording of Mario Castelnuovo-Tedesco’s The Importance of Being Earnest.

Formerly, Mr. Rose led Opera Boston as its Music Director starting in 2003, and in 2010 was appointed the company’s first Artistic Director. He led Opera Boston in several American and New England premieres including Shostakovich’s The Nose, Weber’s Der Freischütz, and Hindemith’s Cardillac. In 2009, Mr. Rose led the world premiere of Zhou Long’s Madame White Snake, which won the Pulitzer Prize for Music in 2011.

Mr. Rose also served as the artistic director of Opera Unlimited, a contemporary opera festival associated with Opera Boston. With Opera Unlimited, he led the world premiere of Elena Ruehr’s Toussaint Before the Spirits and the New England premiere of Thomas Adès’s Powder Her Face, as well as the revival of John Harbison’s Full Moon in March, and the North American premiere of Peter Eötvös’s Angels in America.

He has led the longstanding Monadnock Music Festival in historic Peterborough, New Hampshire. Since his appointment as Artistic Director in 2012. Mr. Rose has conducted several premieres as well as cycles of the symphonies of Beethoven and Mendelssohn. He made his opera stage directing debut in two revivals of operas by Dominick Argento as well as conducting, directing and producing a production and world premiere recording of Ned Rorem’s opera Our Town in the historic Peterborough Townhouse.

Mr. Rose maintains a busy schedule as a guest conductor on both the opera and symphonic platforms. Recent credits include: March 2016, his debut with New York City Opera at the Appel Room at Jazz at Lincoln Center. He has since returned to City Opera in 2017 (as Conductor and Director) and 2018 conducting a Double Bill of Rameau & Donizetti’s Pigmalione. In 2019, he made his debut conducting the Juilliard Symphony in works of Ligeti and Tippett.

As an educator, he has served on the faculty of Tufts University and Northeastern University as well as worked with students at a wide range of colleges such as Harvard, MIT, New England Conservatory, Carnegie Mellon University and the University of California at San Diego amongst others.