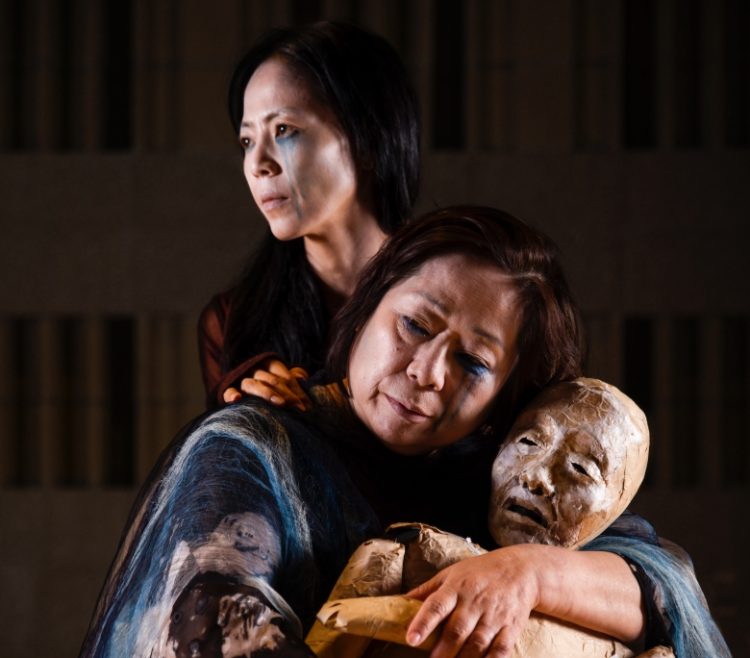 Blood Moon is a poetic, opera-theatre piece for three characters who encounter the past on the night of a full moon: a nephew who returns to the mountain-top where he left his aunt to die forty years earlier, the ghost of the aunt he abandoned, and the moon that presides over this night of reckoning. A contemporary response to a 15th century Noh play, Blood Moon uses choreography, puppetry, and a Taiko-infused score to create a meditation on the end of life, the nature of joy, regret, and whether atonement is possible.

​Artistic Director Garrett Fisher’s music-driven theatrical and film world combines opera, dance, Indian raga, Noh theater and film which The New York Times describes as ​”fusions that have both a ritualistic intensity and an improvisatory freedom…a groundbreaking hybrid…a strong, unified and strikingly individual utterance of unambiguous beauty.” Based on a collaborative process that allows performers their own interpretations, his pieces cohesively integrate a diversity of influences that defy any specific genre or tradition.

Garrett has created more than 12 full-length multimedia pieces that have been premiered in Seattle, New York, Los Angeles, and Cologne, Germany. These include: The Passion of Saint Thomas More, Moon in the Bucket, Stargazer, Silk Road, Psyche, The Passion of Saint Sebastian and At the Hawk’s Well. Wall Street Journal critic Brett Campbell writes: “Among American composers of his generation, Garrett stands out because of the way he’s assimilated such diverse global musical and other artistic influences into a distinctive, original, yet listener-friendly sound. And he’s successfully created a strong collaborative process for making multimedia productions that may be a sustainable model for independent twenty-first-century American composers.”

Ellen McLaughlin’s plays have received numerous national and international productions. They include Days and Nights Within, A Narrow Bed, Infinity’s House, Iphigenia and Other Daughters, Tongue of a Bird, The Trojan Women, Helen, The Persians, Oedipus, Ajax in Iraq, Kissing the Floor, Septimus and Clarissa, and Penelope. Producers include: the Public Theater, The National Actors’ Theater and New York Theater Workshop in NYC, Actors’ Theater of Louisville, The Actors’ Gang L.A., Classic Stage Co., N.Y., The Intiman Theater, Seattle, Almeida Theater, London, The Mark Taper Forum, L.A., The Oregon Shakespeare Festival, The Getty Villa, California., and The Guthrie Theater, Minnesota, among other venues.
Grants and awards include: Helen Merrill Award for Playwriting, Great American Play Contest, Susan Smith Blackburn Prize, the NEA, the Writer’s Award from the Lila Wallace-Reader’s Digest Fund, the Berilla Kerr Award for playwrighting. T.C.G./Fox Residency Grant — for Ajax in Iraq, written for the A.R.T. Institute.
She has taught playwriting at Barnard College since 1995. Other teaching posts include Breadloaf School of English, Yale Drama School and Princeton University, among others.
Ms. McLaughlin is also an actor. She is most well known for having originated the part of the Angel in Tony Kushner’s Angels in America, appearing in every U.S. production from its earliest workshops through its Broadway run.