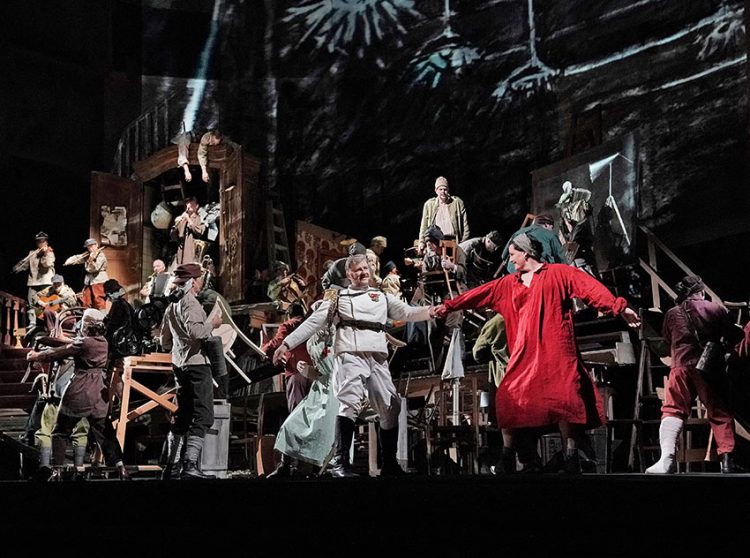 Well, it’s officially 2020. Not only is it the beginning of a new year, but it’s also the start of a new decade. Despite all the negativity in our world, this is a time for optimism.

The Metropolitan Opera would beg to disagree.

On December 27’ 2019, William Kentridge’s production of Alban Berg’s Wozzeck had its company debut. This marks The Met’s first new staging of the opera in 20 years. The piece, one of the greatest atonal operas, deals with World War One, domestic violence, and insanity. The work ends when one child tells another, “You, your mother is dead”. Is there a better way to wash down all that champagne?

In all seriousness, this is a star-studded new production. Peter Mattei and Elza van den Heever sing Wozzeck and his wife Marie. Music director Yannick Nézet-Séguin takes the helm in the pit.

Wozzeck marks Kentridge’s return to The Met since his production of Berg’s Lulu in 2015. The South African artist’s work is interdisciplinary. Films of his drawings and collages usually are the backbone of his work for the stage. Typically, the material he uses reflects a major theme of the opera. The dark ink used for the drawings in Lulu for example, symbolizes the blood of her victims. Similarly, the cut paper of the collages represents the fragmentation of Lulu’s soul. In Wozzeck, drawings of war and its devastation illuminate the protagonist’s unstable mind.

Unfortunately, due to the overhang of the parterre, the videos were hard to see from the back of the orchestra. Nonetheless, their pervasive gray tones lent the production a ghostly feel. Occasional flashes of color were reminiscent of bombs. Additionally, as with the current production of Madama Butterfly, the decision to represent Wozzeck’s son as a puppet, made the child’s plight especially heartbreaking.

Wozzeck’s atonal music is more than an exercise in music theory, it is a perfect vehicle to depict the psychological damage and abuse that society has inflicted on a common soldier. The perpetrators of this cruelty are nameless characters, such as a doctor, and a drum major. Atonality pervades the opera in many forms, creating a sense of doom and destruction. It can be seen in the contrast between the orchestra and the singers. Occasionally, like a Bernard Herman score, Berg uses atonality to illustrate a character’s interpretation of events as filtered through their unstable minds, think of the shower scene in Psycho. The violins do not depict the scene from Marion Crane’s point of view, but rather from the murderous mind of Norman Bates’ alter ego.

In any atonal opera, it is important to showcase the dynamics, and textures of the orchestra. Nézet-Séguin certainly did so. Yet, as in the Act III scene where Marie reads The Bible, he could draw out intense lyricism.

The singing was excellent all around. Both leads are versatile performers. Their range runs from Mozart, to Donizetti, to Wagner. Peter Mattei really explored Wozzeck’s mental instability, but also brought nobility to his suffering. Elza van den Heever was a multidimensional Marie. She was tender with her son, introspective when alone, and capable of standing up to the men around her. Despite being murdered at the end, she was a force to be reckoned with.

There was also a compelling cast of secondary characters. Gerhard Siegel played the Captain like a cartoon villain. Christian Van Horn was appropriately self-important as the Doctor. As the misogynistic Drum Major, Christopher Ventris seemed to be more bluster than anything else.

All in all, it was a great night at the opera. Despite its dark side, this is an incredibly cathartic piece. Yes, it is depressing but honestly you leave the theater feeling better than when you arrived. Perhaps that is why The Met chose it to kick off 2020. Happy New Year!