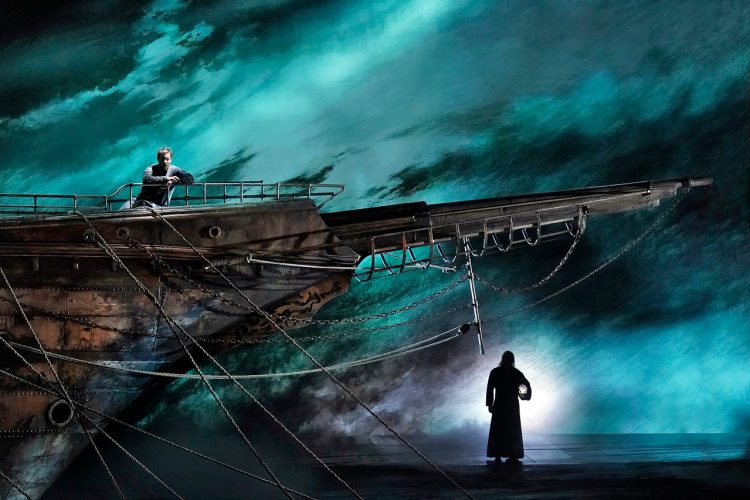 Now that the next Met season has just been announced and performances are under way for the final new production of the current one, I find myself reflecting on this season’s batch of new productions.  I’m struck by the irony that a new production of The Flying Dutchman should follow so closely after the company premiere of Agrippina.  Think about it, in Agrippina, we see a woman surrounded by idiotic men in power, yet she is barred from holding political sway purely because she’s a woman. This is the only reason why she spends the entire opera scheming, and as a result, gave history Nero. Now, wouldn’t it be better if a savvy woman like Agrippina was allowed to take the throne? She might have at least been better in a fire.

By contrast the final new Met production of this season is Richard Wagner’s Der Fliegende Holländer (The Flying Dutchman). A piece which depicts a woman who has to jump into the sea to prove her fidelity to a man.  Okay, truth time.  I loved The Flying Dutchman and I still get goose bumps every time I hear the concluding section of the Overture where Senta’s redemption leifmotif is on full display. But still, understanding that this is Opera and women in the art form really know how to die for love, I can’t help thinking that Agrippina is somewhere in her black cocktail dress throwing a martini against the wall.

And yet, we must give Senta her due. In a recent episode of The Met’s In Focus podcast William Berger, a staple of The Met’s radio broadcasts, makes the case for her, saying that her music is much more vibrant and emotional than that of the other women in her village.  This not only marks her as different but also shows that she exists on another plane.

Senta is also the focal point of this production directed by François Girard. Previously Girard directed Parsifal at The Met.  Senta and her relationship with the Dutchman’s portrait is the center of Girard’s production. She is so attached to it that the entire Met stage is transformed into a giant oil painting.  In Girard’s own words, The Flying Dutchman is about “a woman so obsessed with a portrait that she is eventually swallowed by it”

With all that said, it seems only right to begin my discussion of the March 6 performance with Senta, played exquisitely by Anja Kampe. During the overture a dancer, Alison Clancy, portrayed Senta on stage, establishing her as the centerpiece of this production. The storm called up in the pit raged around her. Yet, it was unclear whether she created it, or was swept up by it. At times she faced it with statuesque poise, as if she were a priestess. At others, she bent sideways, as if she were a tree about to be blown over.

Her red frock, which she wore throughout the opera, made her stand out even more from her fellow villagers. This was particularly true of the women in her sewing circle, who all wore white. The dress also stood out against the dark Scandinavian backdrop. Kampe’s profound, yet sweet soprano was riveting. This Senta clearly existed in another realm, and her voice added to the character’s Cassandra-like quality. Her rendition of the Act II Ballad was oracular. In fairness, her top notes were occasionally uneven. But, what’s the use of spotless singing if the artist has nothing to say?

At just under 2 1/2 hours, Dutchman is incredibly short for a Wagner opera. Girard’s production gave the piece a very cinematic feel. The decision to turn the stage into a painting helped a lot in this regard. The frame around the stage confined the action, encapsulating it, and, at the same time, focusing the audience’s attention. The ropes hanging from the ceiling in Senta’s cottage were reminiscent of the thread of fate that the Norns spin in the prologue of Gotterdammerung. Also, just as in Gotterdammerung, The Dutchman cut through the rope at the end of the scene. This brought inevitability to the denouement.

Additionally, Maestro Valery Gergiev, who returned to The Met for the first time since 2015, kept the action moving in the pit. His dynamic reading of the score demonstrated not only it’s full symphonic weight, but also moments of quiet intimacy, giving the work the refreshing feel of a chamber piece. This was thoroughly engrossing and made the opera even more like a movie.

Welsh superstar, Bryn Terfel, dropped out of the production months ago citing injuries. In his place Evgeny Nikitin was an elemental Dutchman, lending the character a potent mix of pathos and ferocity. The way he made his entrances, materializing as if from nowhere, made him even more of a force of nature.

However, from the back of the orchestra, it was impossible to see the Dutchman’s shadow. A dancer was following Nikitin from backstage, mimicking his every move. This was to produce a shadow which, according to Girard, would symbolize the Dutchman’s supernatural status. On paper, this is a cool idea. In practice, it didn’t seem to contribute anything.

Franz-Josef Selig was a strong, smooth voiced Daland, Senta’s father. At times he got lost in ensembles. David Portillo sang sweetly as the Steersman. Sergey Skorokhodov, as Erik, Senta’s bland mortal fiancé, pushed his voice, particularly in the high register. Nonetheless, his Act III aria was affecting. Shoutout to The Met chorus who made for some robust villagers and sailors.

In the end, everyone who worked on this should be proud of themselves. It really was one of the best shows of the season. Go see it!