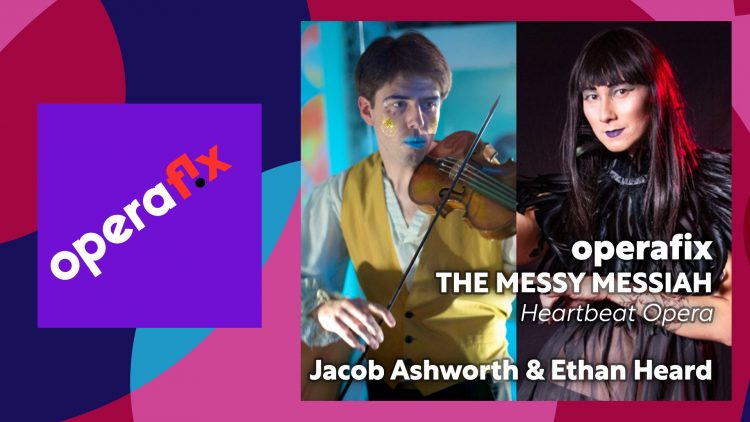 After six years of Halloween revelry, Heartbeat Opera’s annual drag extravaganza moves to December and comes home for Christmas! Every winter season, joyful musical traditions abound: at the school pageant, the holiday party, and in every elevator. This year, with familiar favorites from Handel, Tchaikovsky, Strauss, and more, Heartbeat starts a few traditions of its own… each with a peppermint twist. Expect naught nativities, bawdy ballet, frosty frolics, and a very messy Messiah.

These interdisciplinary celebrations playfully mix opera classics with pop culture and drag to create an otherworldly experience—making both opera and drag accessible to all. Each extravaganza is overseen and conceived by Heartbeat artistic directed by Ethan Heard,  who founded the Yale School of Drag (which continues today) while a student at the Yale School of Drama.

Proof of vaccination and masks required

Heartbeat Opera was founded by Ethan Heard (Co-Founder & Artistic Director) and Louisa Proske (Co-Founder & Resident Director) in 2014, after they graduated from Yale School of Drama’s directing program. Daniel Schlosberg and Jacob Ashworth joined the team as Co-Music Directors from the first season. In the summer of 2021, Proske relocated to Germany, and Heartbeat welcomed Derrell Acon as Heartbeat’s first Associate Artistic Director. Annie Middleton is the company’s Managing Director, and Penny Pun is the Associate Producer.

The Artistic Director and Co-Founder of Heartbeat Opera, “a categorically imaginative company, which has made its name with vital reshapings of repertory operas” (The New Yorker), Ethan Heard has directed Breathing Free: a visual album and Lady M: an online fantasia of Verdi’s Macbeth (created during quarantine), La Susanna (Kennedy Center and BAM), Fidelio, Butterfly, Dido & Aeneas, Kafka-Fragments, six drag extravaganzas, and a performance on the High Line. These productions have been called “urgent and powerful” (The New York Times), “relevant and heartbreaking” (The New Yorker), and “incisive and inspired” (Opera News). Other opera includes Truth & Reconciliation, Desire|Divinity (Judson), Empty the House (Curtis), and Sisyphus (Experiments in Opera); L’Orfeo (Yale), and Poppea (Princeton). Musical theater includes Little Shop of Horrors and A Little Night Music (Berkshire Theatre Group), Sunday in the Park with George (Yale), and Into the Woods (Princeton). He also served as Resident Director of The Secret in Beijing and Shanghai. He received his BA and MFA from Yale. He now teaches at Yale School of Drama and Yale Institute of Sacred Music.

Along with Co-Music Directing Heartbeat Opera since the beginning, Jacob Ashworth is the “impressive Artistic Director” (New York Times) of Heartbeat’s sister company, the baroque and modern “crack ensemble” (New Yorker) Cantata Profana, which he founded in 2012 at the Yale School of Music. As an Artistic Director, Jacob has become increasingly well known as a curator, always telling a new story of the history of music; his vision for crafting rarely-heard masterpieces into theatrical, genre-bending chamber music shows earned Cantata Profana the 2016 CMA/ASCAP National Award for Adventurous Programming.