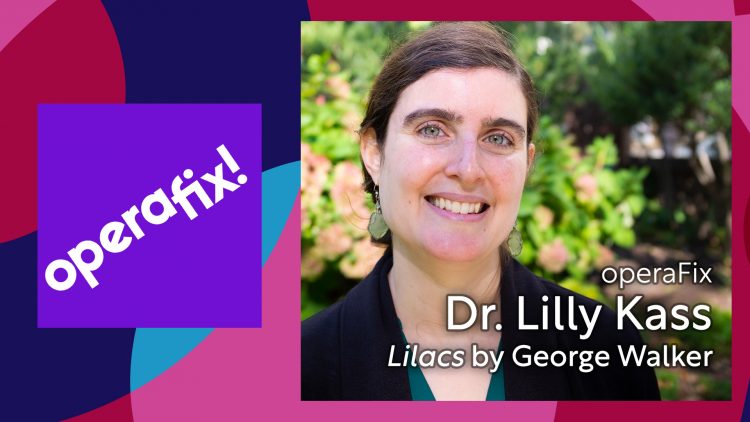 The January 21st performance was live-streamed and is available to watch FREE on the Opera Philadelphia Channel through February 20, 2022.

Each performance opened with Lilacs by American composer George Walker (1922-2018). The 15-minute work, scored for soprano soloist and orchestra, is a setting of 4 stanzas from the Walt Whitman’s poem, “When Lilacs Last in the Dooryard Bloom’d,” a poignant reflection on the assassination of President Abraham Lincoln. Premiered on February 1, 1996, in Boston, Lilacs was awarded with that year’s Pulitzer Prize for Music, making Walker the first Black composer to win the award. Soprano Tiffany Townsend, who made her company debut as Princess Ninetta in Prokofiev’s The Love for Three Oranges in Festival O19, returned as the soloist for Lilacs.

Oedipus Rex is a Handelian opera-oratorio for orchestra, narrator, soloists and male chorus, its Latin libretto was translated from Jean Cocteau’s French interpretation of Sophocles’ archetypal Greek tragedy. Returning to Opera Philadelphia in the title role is tenor William Burden and making her company debut, mezzo-soprano Rehanna Thelwell, will be singing Jocaste.

Walker was first exposed to music at the age of five when he began to play the piano. He was admitted to the Oberlin Conservatory at 14, and later to the Curtis Institute of Music to study piano with Rudolf Serkin, chamber music with William Primrose and Gregor Piatigorsky, and composition with Rosario Scalero, teacher of Samuel Barber. He received his doctorate from the Eastman School of Music. Walker taught at Rutgers University in New Jersey for several years, retiring in 1992.

Walker’s first major orchestral work was the Address for Orchestra. His Lyric for Strings is his most performed orchestral work. He composed many works including five sonatas for piano, a mass, cantata, many songs, choral works, organ pieces, sonatas for cello and piano, violin and piano and viola and piano, a brass quintet and a woodwind quintet. He published over 90 works and received commissions from the New York Philharmonic, Boston Symphony, Cleveland Orchestra, Philadelphia Orchestra, and many other ensembles. He was the recipient of six honorary doctoral degrees.

Walker was the father of two sons, violinist and composer Gregory Walker, and playwright Ian Walker. He died on August 23, 2018 in Montclair, New Jersey at the age of 96. (Click here for more comprehensive bio)

The Scholar in Residence is part of the Opera Philadelphia’s Education & Community team, participating in company lectures, Reflection and Re-Vision panel discussions, the development of Dress Rehearsal Program resources, and other educational programs and community engagement events.

Lily Kass is an interdisciplinary scholar, educator, and artist. She teaches music history courses on topics such as “Powerful Women in Opera,” “Mozart Operas,” and “Exoticism on the Musical Stage” across the Mid-Atlantic Region, at institutions such as Johns Hopkins University, Temple University, and the University of Pennsylvania. She earned an A.B. in Literature from Harvard University in 2010, and a Ph.D. in Musicology from the University of Pennsylvania in 2017. Lily’s research focuses on how operas are reimagined, adapted, and translated to meet the needs of new audiences.

Lily shares Opera Philadelphia’s passion for making opera accessible and inclusive, and she has been a frequent collaborator with Opera Philadelphia’s Community Initiatives department since 2014. She has also lectured for the Philadelphia Chamber Music Society. In 2011, Lily served as a Lectures and Community Programs Fellow at the Metropolitan Opera Guild, promoting and developing lecture series and facilitating backstage tours of the Metropolitan Opera House.

Lily is a trained coloratura soprano, and she co-founded the opera scenes program at the University of Pennsylvania, which she directed from 2014-2018. She is currently honored to serve as a Marian Anderson Scholar Artist with the National Marian Anderson Museum and Historical Society.