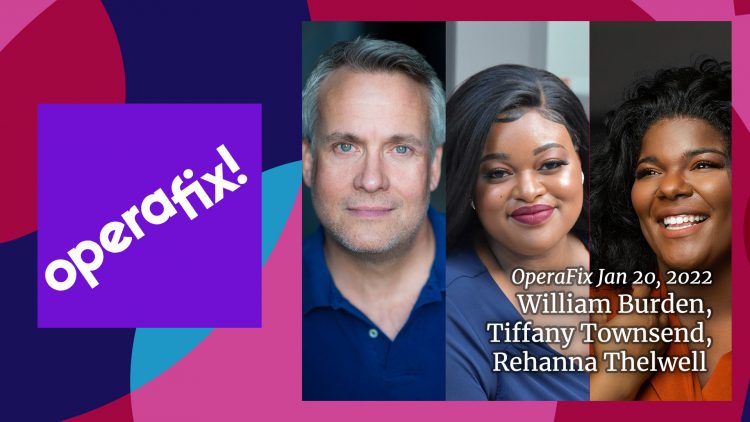 Oedipus Rex is a Handelian opera-oratorio for orchestra, narrator, soloists and male chorus, its Latin libretto was translated from Jean Cocteau’s French interpretation of Sophocles’ archetypal Greek tragedy. Returning to Opera Philadelphia in the title role is tenor William Burden and making her company debut, mezzo-soprano Rehanna Thelwell, will be singing Jocaste.

Each performance opens with Lilacs by American composer George Walker (1922-2018). The 15-minute work, scored for soprano soloist and orchestra, is a setting of 4 stanzas from the Walt Whitman’s poem, “When Lilacs Last in the Dooryard Bloom’d,” a poignant reflection on the assassination of President Abraham Lincoln. Premiered on February 1, 1996, in Boston, Lilacs was awarded with that year’s Pulitzer Prize for Music, making Walker the first Black composer to win the award. Soprano Tiffany Townsend, who made her company debut as Princess Ninetta in Prokofiev’s The Love for Three Oranges in Festival O19, returns as the soloist for Lilacs.

This season, Mr. Burden returns to the Metropolitan Opera for the US premiere of Brett Dean’s Hamlet and to the Philadelphia Orchestra for the world premiere of the concert version of Kevin Puts new opera, The Hours.

Raised in Florida, Mr. Burden received his master’s degree in Vocal Performance at Indiana University. He was also a member of the Merola Program in San Francisco and at the Apprentice Artists Program at the Santa Fe Opera. Mr. Burden has been a member of the faculty at the Mannes School of Music since the fall of 2015, and in the fall of 2018, he joined the voice faculty of the Juilliard School of Music. He previously served as Artist-in-Residence at the 2017 and the 2021 Glimmerglass Festival.

Mezzo-soprano Rehanna Thelwell, a New Jersey native returned to the Cafritz Young Artist program of Washington National Opera for their 2020-2021 season after a successful first year in which she appeared as Third Lady in the Young Artist production of The Magic Flute as well as Conchetta in the American Opera Initiative new work, Night Trip. Along with her mainstage roles, Thelwell had the opportunity to workshop new works with Esperanza Spalding for Iphigenia and Missy Mazzoli and Royce Vavrek for The Listeners. Additional engagements for 2020-2021 included joining the National Symphony Orchestra as the Narrator for Portrait of a Queen, recording Blue with Washington National Opera, her mainstage debut with Opera Theatre of Saint Louis as Aunt Lou in Highway 1, U.S.A, and Opera in the Park with Madison Opera. The 2021-2022 season sees her 3rd year with the Cafritz Young Artist program of Washington National Opera where she will sing a performance of the title role in Carmen. Additionally, she joins the South Florida Symphony Orchestra for Handel’s Messiah, makes her debut with Opera Philadelphia as Jocasta in Stravinsky’s Oedipus Rex, and sings Beethoven’s 9th Symphony with the Memphis Symphony.

A native of Jackson, Mississippi, soprano Tiffany Townsend recently received her Professional Studies Certificate in Opera from The Curtis Institute of Music. She received her Bachelor of Arts from Millsaps College studying under James C. Martin and Masters of Music from The Juilliard School studying under Marlena Malas.

At Millsaps, she was seen as Lucy Lockit in Benjamin Britten’s The Beggar’s Opera and performed Fiordiligi in Cosí fan tutte in scenes. At Juilliard she has performed scenes from L’amico Fritz by Mascagni and Louise by Charpentier, and covered the role of Dorothée in Cendrillon by Massenet and Countess in Le Nozze di Figaro. At the Chautauqua Institution Ms. Townsend performed First Lady in Die Zauberflöte and various scenes in their Opera Scenes concert in 2017.

At Curtis, she performed Female Chorus in Britten’s Rape of Lucretia, Tatyana in Tchaikovsky’s Eugene Onegin, Donna Anna in Mozart’s Don Giovanni, Brenda in Rene Orth’s Empty the House, and Samuel Barber’s Hermit Songs with Mikael Eliasen.Ms. Townsend has appeared in concert with The Mississippi Chorus, Millsaps College Singers, The New York Festival of Song, George Crumb’s Winds of Destiny with The Juilliard Percussion Ensemble in Alice Tully Hall. She made her professional debut in September 2019 as  Princess Ninetta with Opera Philadelphia.