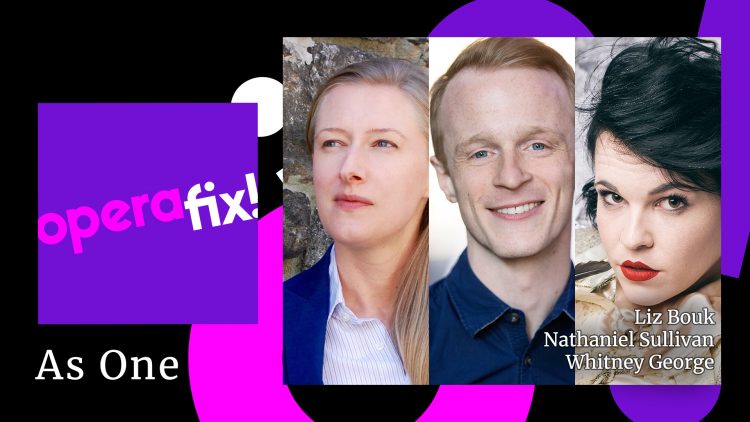 AS ONE: A Chamber Opera for Two Singers & String Quartet

In As One, two singers share the role of a sole transgender protagonist. We invite you to experience Hannahs journey of self-actualization as she discovers and uncovers her truest self.

After graduating from The University of Cincinnati, CCM and Westminster Choir College, Liz moved to the Syracuse area and began studying with Katherine Ciesinski at the Eastman School of Music. During the 2017-2018 season, Opera News praised Liz’s “impressive firmly-grounded contralto” as Augusta Tabor, in Utopia Opera’s production of The Ballad of Baby Doe. Again with Utopia Opera, Liz’s portrayal of Fosca in Sondheim’s Passion also earned glowing reviews. With the composer/librettist team Felix Jarrar and Bea (Brittany) Goodwin Liz premiered two new roles: Mrs. Cratchit in Gramercy Opera’s A Christmas Carol: The Opera and Tristan Tzara in Tabula Rasa. The creative team wrote Tzara specifically with Liz in mind – to coincide with his own public coming out as a trans-man. In the 2018-19 season, Liz performed Hannah-after in Alamo City Opera’s As One, La Suora Infermiera in St. Petersburg Opera Company’s Suor Angelica, and Sarah in the World Premiere of Stonewall with New York City Opera at Lincoln Center. Recent credits include creating the role of Queen Anne in Princess Maleine a new opera by Whitney George & Bea Goodwin produced by dell’Arte Opera Ensemble.

Recent credits include his Carnegie Hall solo debut in Finzi’s Requiem da Camera with the New York Choral Society, and the world premiere of Matthew Greenbaum’s Crossing Brooklyn Ferry with Momenta Quartet. Awards and recognitions include the Grace B. Jackson Prize for exceptional service at the Tanglewood Music Center (2019); Third Place in the Lyndon Woodside Oratorio Solo Competition (2019); Third Place in the Orpheus Vocal Competition (2019); and First Place in the NATS National Musical Theatre Auditions (2018). Sullivan’s 2019-20 season includes Laura Kaminsky’s and Mark Campbell’s As One with mezzo-soprano Liz Bouk (November), and the world premiere of Jacob Bancks’s Karkinos with the Quad City Symphony Orchestra (May). Sullivan received his BM from the University of Nebraska–Lincoln (2014) and his MM from the Bard College Conservatory of Music (2017).

Whitney most recently conducted the world premiere of Princes Maleine, her new opera with a libretto by Bea Goodman (based on the play by Maurice Maeterlinck), commissioned and produced by dell’Arte Opera Ensemble. Whitney George specializes in the use of mixed media to blur the distinctions between concert performance, installation art, and theater. Utilizing a wide variety of material including literary texts, silent film, stock footage, and visual arts, George’s compositions are characterized by an immersive theatricality that thrives on collaboration in all phases of the creative process. She was named as a John Duffy Composers Institute Fellow for two years running in 2010 and 2011 for her staged works The Yellow Wallpaper and And Thus the Whirligig of Time Brings in His Revenges.The Robert Starer Award commemorated her multi-movement orchestral work “The Anatomy of the Curiosity Cabinet” in 2011,and she received the 2017 Elebash Award for her orchestration of Miriam Gideon’s opera Fortunato. Whitney is Artistic Director and Conductor of the new music ensemble, The Curiosity Cabinet (est. 2010).