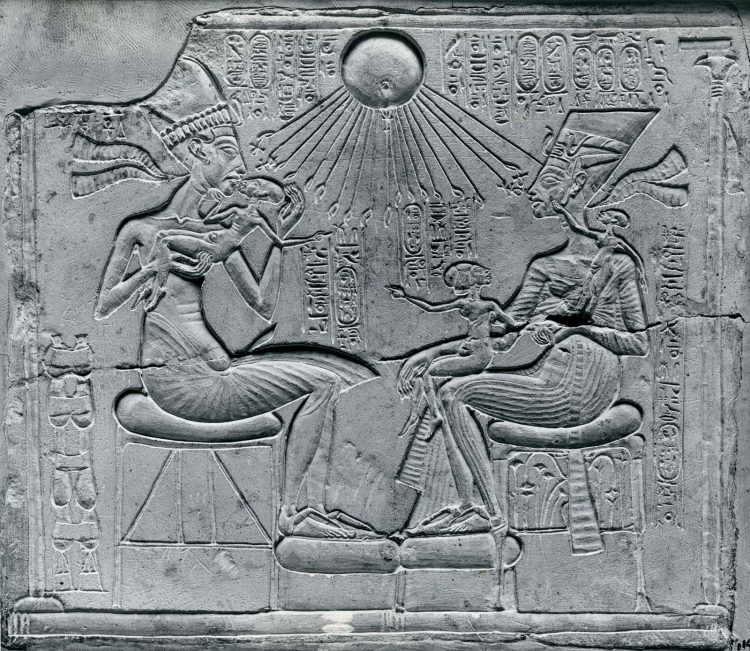 If you mention Ancient Egypt, what comes to mind? Pyramids, gods and goddesses, and pharaohs quickly populate the imagination. And, let’s not forget, the very famous love affairs and palace intrigues of Julius Caesar, Mark Antony, and Cleopatra. This is enough to make anyone want to study Egyptology.

The great opera composers felt the same way. Throughout the centuries, composers have set many operas in Ancient Egypt. They used the exotic locale as a backdrop to discuss contemporary issues. Verdi’s Aida illustrates the danger of Imperialism. Mozart’s Magic Flute uses a fairytale Egypt to examine gender politics during Europe’s age of Enlightenment. When Phillip Glass’s Akhenaten arrives at the Metropolitan Opera this month, New York audiences will see how Egypt’s rebel Pharaoh can speak to the 21st century.

Born during the 18th Dynasty, and originally crowned Amenhotep IV, Akhenaten (r 1353-1336 BCE) has much to recommend him to history. King Tut was his son. His queen, Nefertiti, was called the most beautiful woman in the world. Historians have also named him “History’s First Individual.” This title inspired Glass’ 1983 opera.

So, what made Akhenaten the first individual? Simple, he was the world’s first monotheist. Becoming the first person to believe in one god, he destroyed centuries of tradition. As a result, Akhenaten’s reign witnessed a revolution in religion, art, and social norms. Egypt’s gods gave way to the Sun, called Aten. Amenhotep IV became Akhenaten or “servant of Aten.” The old temples with their dark, cramped inner sanctuaries, which only priests could access, were demolished. Instead open-air temples with court yards surrounded by tables for personal offerings became the norm.

In art, realism held the day. Gods were no longer depicted as falcons, or humans with jackal heads. Instead, Aten was represented as the Sun itself. The radically monogamous king and queen were depicted as real humans and not divine rulers. Their palace featured a “window of appearances,” where the monarchs could easily commune with their subjects. This prefigured the royal balconies on modern palaces. Additionally, Akhenaten was rumored to be a hermaphrodite. When countertenor Anthony Roth Costanzo who sings the title role at the Met, gave an NPR interview, he said that the gender fluid depictions of the pharaoh in art of the period makes him the “first trans icon.”

Akhenaten is the last of three portrait operas by Glass. The other two are, Einstein on the Beach (1976), and Satyagraha (1980), a portrait of Gandhi. These works are non-linear tableaux which demonstrate the many sides of great people from history.

Philip Glass is a minimalist. This means his orchestra repeats the same phrase several times. Eventually, subjecting it to gradual variations. This is ideal for the opera’s many ceremonies. The text comes from letters and other documents. A setting of Biblical Psalm 104 shows Akhenaten’s influence on modern monotheism.

Unfortunately, Akhenaten’s reforms did not last beyond his reign. Egypt reverted to polytheism and branded him a heretic. The opera’s final scene pays tribute to this. In it, tourists in modern-day Egypt explore the ruins of his capital while the ghosts of his court make their way to the afterlife.

Gregory Moomjy is a graduate of Columbia University with a Master of Science in Journalism and Fordham University with a degree in Musicology. He has written many reviews and commentary on opera for a variety of publications including New Jersey Monthly, Salon, PC Gamer, and Mexico’s Pro Ópera. He currently resides in New York City.