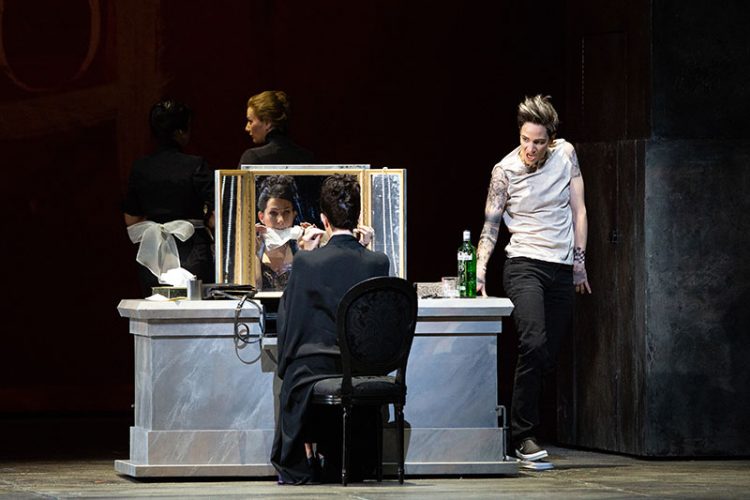 The Metropolitan Opera, February 6 through March 7, 2020

If you heard of a woman who among other things, was the only female leader of the Roman empire, gave birth to Nero, was Caligula’s sister, and wrote her memoirs which have since been lost, you’d probably ask yourself, why isn’t there an opera about her?

Well, there is. It’s Handel’s Agrippina, and its company debut occurs on February 6. The dream cast includes a bevy of baroque stars, such as Joyce DiDonato, Brenda Rae, and Iestyn Davies. Conductor Harry Bicket, a scholar of 18th century music, presides over the pit.

According to Director Sir David McVicar, despite taking place in ancient Rome, what the opera says about power and those who go after it, is so contemporary that he set the opera in modern times. Well, modern with a caveat. Imagine a world where the Roman empire just never ended. Perhaps the most interesting facet of this production is how McVicar and his design team periodically updated it. Originally from the late 1990s, they feel the need to constantly change the production, so it reflects contemporary culture.

If you’ve seen the posters of DiDonato’s Agrippina, as she prepares to eat the olives out of her martini, you may think that it’s a novel idea. Surprisingly however it is not, throughout the 50 or so years that the Baroque revival has lasted, scholars have shown that despite its somewhat stilted image, opera from the baroque period was seen as something incredibly relevant and very of its day. Today when we think of operas like Aida, which takes place in ancient Egypt, or Turandot, set in ancient China, we think of productions which are incredibly grand and ornate, dripping in gold, pharaohs, slaves, and imperial ministers of state. In the 17th and 18th centuries, however, that wasn’t exactly the case. Back then singers played historical leaders like Cleopatra or mythical figures like Orpheus while wearing contemporary dress. One of the earliest productions of the baroque revival, Handel’s Giulio Cesare at New York City Opera in 1966, featured Beverly Sills wearing an 18th century gown. The only indication that she was Cleopatra was her Egyptian headdress. It is important to remember that during the baroque period, the focus of operas like Giulio Cesare or Agrippina was not to provide audiences with an accurate depiction of historical events, but rather to explore what history, and the people that created it, could say about contemporary society.

The other major misconception, that Agrippina breaks down is that opera seria is formulaic and stagnant. This may be true of other composers, but certainly not Handel. The challenge of setting emotions to music, and in particular navigating quick changes in the character’s psychological state is what drew him to opera. For instance, early in the opera, Agrippina comforts Ottone promising him that she will see to it that he marries Poppea. However, the rhythmic baseline of her aria belies the text. It’s as if you can hear her inner machinations, making plain her schemes.

Handel was a musical and cultural magpie. A composer born in Germany, who studied opera in Italy, and ended up being the toast of the London theater scene, where he eventually ran the King’s theater. Despite the ever-growing popularity of his operas in modern times, he’s still largely famous   for his oratorios like Messiah. He began writing oratorios in the final phase of his career, when the Italian opera serias that he was famous for fell out of favor with English audiences.

On paper, opera seria is dry and hardly theatrical. Its main purpose was to praise the nobility. It did so by presenting its audiences with paper aristocrats, either from mythology or history, who led their countries, but faced very few challenges doing so. There was nearly always a happy ending, because how can you praise the king if the king is dead? And even if there was a death, as in Tamerlano, where the ottoman sultan dies in Persian captivity, it is usually overshadowed by a royal marriage. Hence even though the rulers may die, the crown itself is always secure.

Musically an opera seria was basically a concert in costume with the singers acting out their recitative and standing center stage to sing their arias. The predominant style of solos was the da capo aria. This piece had three sections, following the form, A-B-A, which allowed the noble character to present his feelings in the form of an Aristotelian oration, while simultaneously allowing the singer to ornament the text in order to demonstrate the character’s rank.

Agrippina, written for Venice in 1709, was Handel’s first hit. Unlike the opera seria he would write for London, this opera is a dark comedy. Musically this opera contains a lot of variety. There is dense recitative as there are a lot of machinations to be conveyed through the plot. However, there are also Venetian street songs, and music from the popular Venetian theater as well.

The piece is not a full depiction of Agrippina’s life, but rather it follows her schemes to place Nero on the throne. Unfortunately, this means that some of the most dramatic events of her life are not depicted. However, I am sure that an operatic depiction of her murder by Nero’s guards, where she instructed them, “Smite my womb,” because that was where Nero came from, will eventually be written. In contrast, this is an opera where everyone is either scheming for power, or fending off schemes, in order to keep it. The libretto is immensely funny, but no character is entirely without fault. Scholars have argued that true to opera seria, the characters do have redeeming qualities. Agrippina, for example, does not scheme for herself, but rather for her son. Still, this seems like a stretch. The truth is this is an opera with a convoluted plot.

Cardinal Vincenzo Grimani based his libretto off of the works of Roman historians like Tacitus. However, the text is full of topical references to contemporary politics. Some historians even believe that Grimani took inspiration from his own rivalry with Pope Clement XI. Recently, the MET’s production team, along with several members of the cast, hosted a preview of Agrippina at the Guggenheim. Peter Gelb, the METs general manager joked that he wanted to thank the organizers of the impeachment trial in Washington for advanced publicity. Despite all of the laughs it got, this quip points to the enduring appeal of both Agrippina and more widely, Handel. Audiences will always want to see what it’s like to be inside the corridors of power. So much the better if there’s a little bit of backstabbing involved.